Some of the updates will include rail replacement, fiber optic cable installation, improved station facilities and upgraded customer information displays, WMATA announced Tuesday. WMATA says the work is scheduled for the summer, when ridership is typically lower.

Metro will close some Green, Orange, Silver line stations for weeks this summer

The Washington Metropolitan Area Transit Authority plans to temporarily close several stations along the Green, Orange and Silver lines this summer to allow for"maintenance and modernization."

"Continued maintenance work is essential to safe and reliable rail service," said Andy Off, Executive Vice President of Infrastructure. "We are working strategically to target maintenance locations and minimize the impacts on customers as we conduct this critical work to upgrade systems, improve reliability, and modernize station facilities." 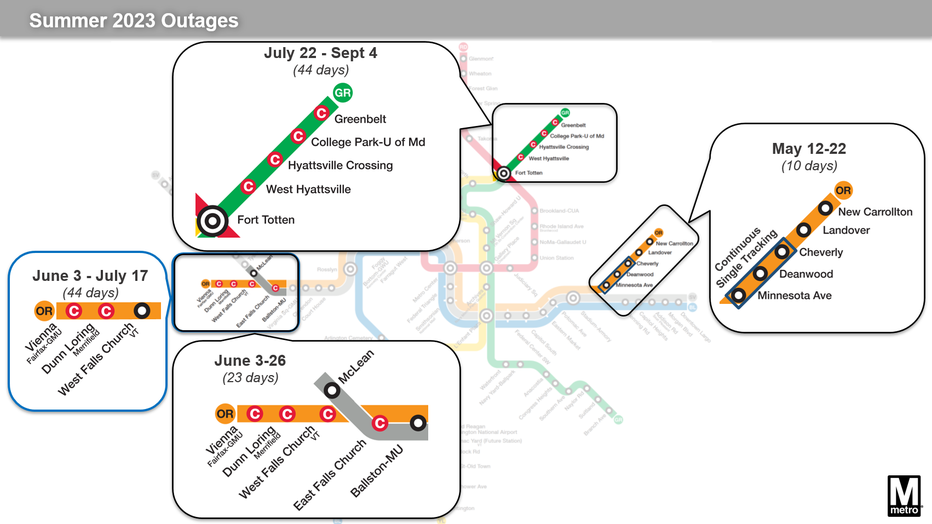 A map of WMATA's station closures for summer 2023.

The first service disruption will be for ten days along the Orange line to complete roofing work at Minnesota Ave, Deanwood, and Cheverly stations. Metro will be single-tracking from Stadium-Armory to Cheverly stations.

To replace the 40-year-old stall rail that WMATA says is significantly more susceptible to rail breaks than rail in any other part of the system, the Orange and Silver lines will be shutdown from Ballston to McLean and Vienna stations.

The shutdown along the orange line will continue from West Falls Church to Vienna stations for an additional 21 days. As part of this shutdown along the Orange line, WMATA  will upgrade old copper cables to fiber-optic cables to modernize the system, including advanced radio, signal, and train communication technology.

The Green line will be shut down for 44 days from Fort Totten to Greenbelt to complete fiber-optic cable installation.

Other maintenance work will take place this summer, with new passenger information displays being installed at Metro Center, Gallery Place and L’Enfant stations, and four escalators at the Dupont Circle slated to be replaced towards the end of the summer