EL PASO, Texas - Authorities in two U.S. cities scoured leads in a pair of weekend mass shootings that killed 31, trying to piece together the motives that led two young men to unleash violence on innocent people in crowded public places.

In El Paso, Texas, the death toll creeped upward Monday from the shooting two days earlier at a Walmart store, with two additional victims succumbing to injuries. Police zeroed in on a racist screed posted online before the shooting to try to link it to the suspect. In Dayton, Ohio, even more questions remained about what spurred the suspected shooter to target a popular nightlife stretch in an attack that left the suspect's sister among the dead.

The back-to-back shootings hours apart and 1,300 miles (2,092 kilometers) away from each other quickly turned political, with Washington lining up along typical party contours in response. President Donald Trump cited mental illness and video games but steered away from talk of curbing sales of guns, including the military-style weapons believed to have been used in the attacks. 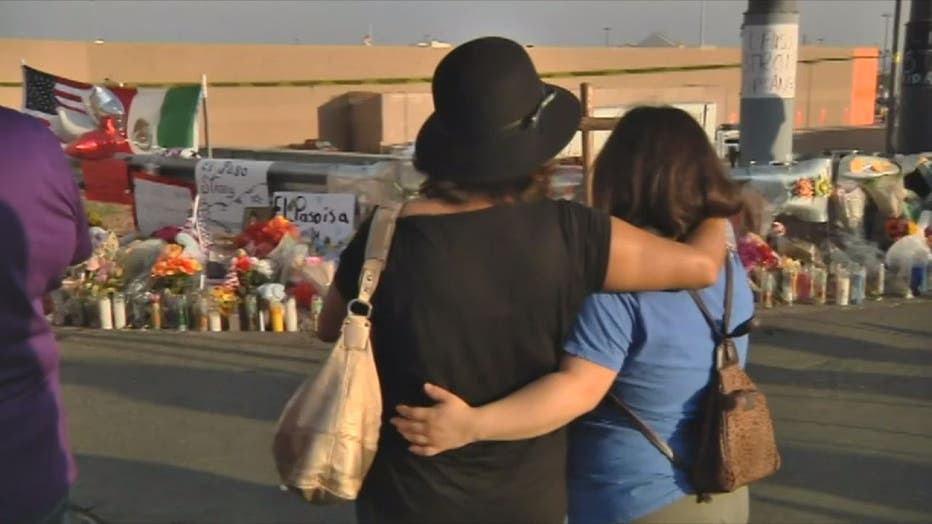 As familiar post-shooting rituals played out in both cities, decades of an unmistakably American problem of gun violence ensured as many headlines as the deaths garnered, they weren't entirely shocking to a public that's grown accustomed to such bloodshed. As with a litany of other shooting sites before, stories of the goodness seen in lives cut short juxtaposed with inklings of the demented motives of the shooters, and on-scene heroics with troubling ideologies that may have sparked the bloodshed.

Equally familiar was the politicized reaction from Washington and around the country.

Trump made a vague expression of openness to new gun laws that was met with skepticism by an opposition that has heard similar talk before.

"Hate has no place in America," the president declared in a 10-minute speech from the White House Diplomatic Reception Room, condemning racism and rehashing national conversations on treatment for mental health, depiction of violence in the media, and discourse on the internet.

The anti-immigrant writing that police were working to link to the alleged perpetrator in the Texas shooting, 21-year-old Patrick Crusius, mirrored some of Trump's anti-immigrant rhetoric. Some, like Ernesto Carrillo, whose brother-in-law Ivan Manzano was killed in the Walmart attack, said the president shares blame for inflammatory language Carrillo called a "campaign of terror."

"His work as a generator of hate ended in this," said Carrillo, who crossed the border from Ciudad Juarez on Monday for a meeting in El Paso with Mexico's foreign minister. "Thanks to him, this is all happening."

Trump, in turn, tweeted that the media "contributed greatly to the anger and rage that has built up."

Trump suggested a bill to expand gun background checks could be combined with his long-sought effort to toughen the nation's immigration system, but gave no rationale for the pairing. Studies have repeatedly shown immigrants have a lower level of criminality than those born in the U.S., both shooting suspects were citizens, and federal officials are investigating anti-immigrant bias as a potential motive in the Texas massacre.

Democratic Sen. Chris Murphy of Connecticut, a leading voice on gun reform since the 2012 shooting at Sandy Hook Elementary School in his state rattled the country with the slaughter of 20 children, immediately dismissed the president's proposal as meaningless. "Tying background checks to immigration reform is a transparent play to do nothing," he wrote on Twitter.

Whatever the political back-and-forth, or the re-energized presence of gun control talk on the presidential campaign trail, the very real consequences of gun violence were still being bared by victims badly injured in the two states.

In both incidents, a young white male was identified as the lone suspect. Though authorities were eyeing racism as a possible factor in Texas, where the alleged shooter has been booked on murder charges, in Ohio police said there was no indication of a similar motivation. Police in Dayton said they responded in about 30 seconds early Sunday and fatally shot 24-year-old Connor Betts. While the gunman was white and six of the nine killed were black, police said the quickness of the rampage made any discrimination in the shooting seem unlikely.

Betts' sister was also among the dead.

"It seems to just defy believability he would shoot his own sister, but it's also hard to believe that he didn't recognize it was his sister, so we just don't know," said Dayton Police Chief Richard Biehl.

Ohio Gov. Mike DeWine visited the scene Sunday and said policymakers must consider: "Is there anything we can do in the future to make sure something like this does not happen?"

Hours later, hundreds of people stood at a vigil and vented their frustration at the Republican governor, interrupting him with chants of "Make a change!" and "Do something!" as he talked about the victims.

"People are angry, and they're upset. They should be," said Jennifer Alfrey, 24, of Middletown, who added that she didn't agree with interrupting the vigil but understood why so many did.

In Texas, where 22 were killed, authorities said the accused shooter hailed from a Dallas suburb a 10-hour drive away. Authorities seemed to take some solace in knowing the shooter wasn't one of their own.

"It's not what we're about," El Paso Mayor Dee Margo said.

Sedensky reported from New York and can be reached at msedensky(at)ap.org and https://twitter.com/sedensky ------