Walmart has praised several employees for their “patience and professionalism” when dealing with an irate, mask-eschewing customer in Anchorage, Alaska. (Credit: Ashlee Wickberg via Storyful)

Walmart has praised several employees for their “patience and professionalism” when dealing with an irate, mask-eschewing customer in Anchorage, Alaska.

The man, who was not publicly identified, was filmed screaming in the workers’ faces on Thursday, telling them to “get back on [their] highway to hell” and “return to [their] service of Satan,” all while being escorted out of the store for allegedly refusing to abide by the company’s current coronavirus health and safety policies.

He was also seen brandishing his middle finger at one employee while spewing curse words at others.

“It’s unfortunate that this individual chose to express their displeasure in such an inappropriate manner, but we’re proud our associates displayed patience and professionalism as they navigated this challenging situation,” Walmart said of the incident in a statement shared with McClatchy News. 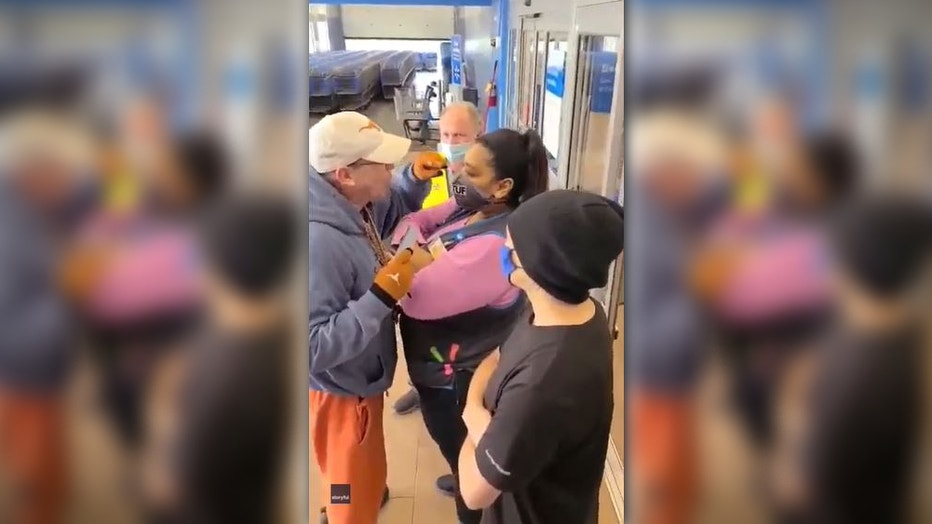 Walmart has praised several employees for their “patience and professionalism” when dealing with an irate, mask-eschewing customer in Anchorage, Alaska. (Credit: Ashlee Wickberg via Storyful)

In footage of the incident that was shared to social media, the man is first seen marching toward the exit of the store, allegedly after being denied service. He then demands to speak to a manager — before being informed that management was present — before claiming the staff was “taking away” his rights.

Employees are seen politely asking him to leave and to stop yelling.

“No! I choose to yell! And you cannot stop me!” he screams back, claiming the workers have not “established” their authority over him.

“I have the right to life, liberty and the pursuit of happiness. My happiness is best served by standing in your face, and saying you’re a fool, and wrong! You have no authority over me!” the man, who referred to himself as “godly,” says at one point.

He eventually leaves the store, though not before spewing additional profanity at the staff and telling them they “aren’t even human.”

Commenters across social media, meanwhile, were quick to denounce the man’s actions and commend the employees who shuffled him from the store.

“Wal-Mart needs to give all those employees paid leave for at least 1 month for pain & suffering,” one Instagram user wrote.

“Of course he confronts the woman,” another noted, remarking on the fact that the man was filmed approaching one of the female employees — and stopping only inches from her face — during the clip. “Captain Sweatpants is afraid to shout in the face of a man. Funny how the ones who invoke God are always the nuts.”

“The idea of wearing a mask has brought every crazy person out of the woodwork,” one said.

A clip of the altercation has since been viewed more than 11 million times on Twitter.

A representative for Walmart was not immediately available to provide further information.