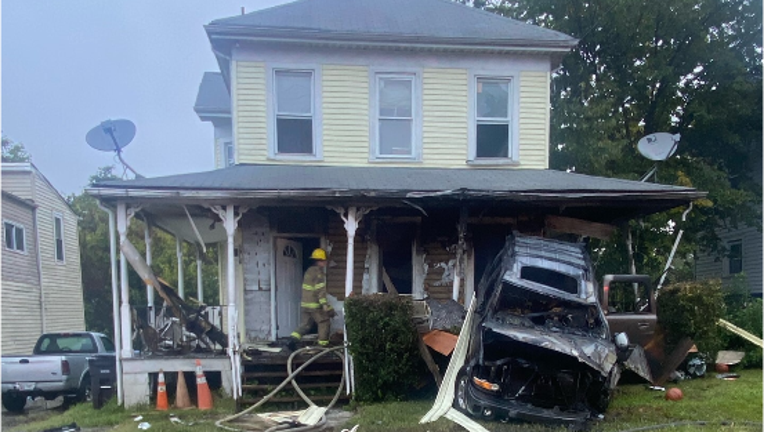 The man’s identity and cause of death were not immediately known.

A spokesperson with the Prince George’s County Fire Department says PGFD received an emergency call for the vehicle and house on fire at around 7:15 a.m. Saturday.

After arriving to the scene, authorities believe the man was driving his SUV in the direction of Maryland 704 when he struck a pole, causing the vehicle to spin out and strike the home near the 5900 block of Addison Road.

The fire then spread to the home, engulfing the porch and extending into a front bedroom. FOX 5 is told four people were inside the home at the time.

“Remarkably, all four of those adults are okay. They were able to self-evacuate. There were no injuries suffered as a result of the fire by the people that were inside the house or by the firefighters on scene,” said PGPD Spokesperson Jennifer Donelan.

Witnesses around the scene remained stunned Saturday. At least one man who claimed to have seen the SUV catch fire told FOX 5 off-camera he wished he could have helped.

The man and others said they heard a sound before the SUV burst into flames with the driver, sadly, still inside.

After being struck by the SUV, Donelan says the utility pole carrying live wires struck a second vehicle with another driver inside. That second driver is expected to survive.

Authorities are still investigating the exact cause of death.

A total of five people were displaced from the Addison Road home.