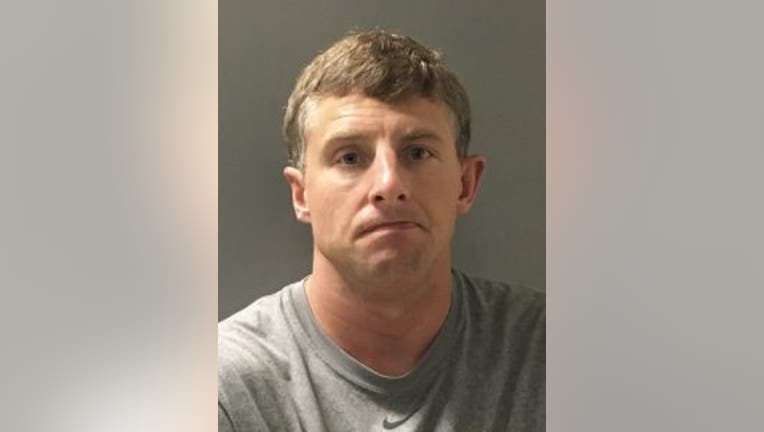 Two local teachers are the latest to face criminal charges for having sexual contact with students.

According to court documents, Mason and the victim regularly communicated over the summer, and then into the ensuing school year.

Mason allegedly told the victim – who was a student in his class – that he was “interested in her.”  He then had sexual contact with the victim in a park near the school, where they met several other times.

Court documents indicate that Mason also had sexual contact with the victim in his classroom.

Police were tipped off to Mason’s alleged crimes when he told a family member about his relationship with the underage girl.

On Wednesday, Mason was arrested and charged with sexual abuse of a minor and fourth-degree sex offense by a person in a position of authority.

Peter Wright Priest Mason, a 42-year-old special education teacher at Colonel Zadok Magruder High School in Montgomery County, is accused of having a sexual relationship with the student, according to the Montgomery County Department of Police Special Victims Investigation Division.

Mason has been employed with MCPS since 2011. The letter says "he worked as a paraeducator at Northwest High School from 2011 to 2015 and has worked as a special education teacher at Magruder High School since 2015."

Read the letter sent to staff and families in full below:

I am writing to inform you about the arrest of Mr. Peter Mason, a special education teacher at Magruder High School, on charges sex abuse of a minor and fourth-degree sex offense by a person in a position of authority. The charges stem from an alleged inappropriate contact between Mr. Mason and a Montgomery County Public Schools (MCPS) student.

MCPS is fully cooperating with law enforcement on this matter. Mr. Mason was immediately placed on administrative leave after the allegations of his actions were made to the school.

Mr. Mason has been employed with MCPS since 2011. He worked as a paraeducator at Northwest High School from 2011 to 2015 and has worked as a special education teacher at Magruder High School since 2015.

These charges are deeply concerning and unacceptable and represent a serious breach of trust, responsibility, integrity and the law. We hold our employees to a high standard of character and these allegations violate that. Please know that the safety of our students is our top priority and we work every day to ensure that we maintain a safe learning environment for all.

We are committed to the well-being of all of our students. A support team of school psychologists and counselors from MCPS will join with our staff beginning tomorrow, and will be available as needed to provide counseling and support to students.

I want to thank the MCPS employees who quickly reported these allegations when they were brought to their attention.

If you have any additional questions, please contact me at 240-740-5550. Also, if you or your child has any information that may be helpful to the investigation, I ask that you call the Special Victims Investigations Division of the Montgomery County Police Department at 240-773-5400.