Goldsmiths University of London is banning the sale of beef from all campus vendors as a first step toward becoming a carbon-neutral organization by 2025.

LONDON - In a major push to cut carbon use across its campus, Goldsmiths University of London is banning the sale of beef from all campus vendors as a first step toward becoming a carbon-neutral organization by 2025, the university announced Monday.

The college’s new warden, professor Frances Corner, wasted no time putting in place a plan of action to achieve this goal. One of her first moves as warden was to announce a set of major measures that would help reduce the campus’s carbon footprint, beginning with banning beef.

“The growing global call for organizations to take seriously their responsibilities for halting climate change is impossible to ignore,” Corner said. “Though I have only just arrived at Goldsmiths, it is immediately obvious that our staff and students care passionately about the future of our environment and that they are determined to help deliver the step change we need to cut our carbon footprint drastically and as quickly as possible.”

Why ban beef and not other meats?

Eliminating meat entirely would have the greatest net positive impact in reducing carbon emissions, but simply replacing beef with meats that have a lower carbon footprint can make a huge difference as well.

The impact of beef on land use, water and greenhouse gas emissions is anywhere between three to 10 times greater than that of chicken, according to the BBC.

“Replacing all beef consumption with chicken for one year leads to an annual carbon footprint reduction of 882 pounds CO2e,” according to the Center for Sustainable Systems at the University of Michigan.

The importance of reducing global meat consumption in combating carbon emissions is being touted by many climate change experts.

“The biggest intervention people could make toward reducing their carbon footprints would not be to abandon cars, but to eat significantly less red meat,” University of Leeds professor Tim Benton told the Guardian.

During a discussion from contributing scientists on the United Nations’ Aug. 9 report examining how global warming and land interact in a vicious cycle, members of the Intergovernmental Panel on Climate Change (IPCC) said that if the world eats less meat and more plant-based food it will help fight climate change.

About half a dozen of the scientists on the panel said they've reduced their personal diets because of climate change, with one of them saying it helped him lose weight and feel healthier.

Along with banning the sale of beef products at campus food outlets by the start of the upcoming 2019 academic year, Goldsmiths will be implementing a range of other initiatives. 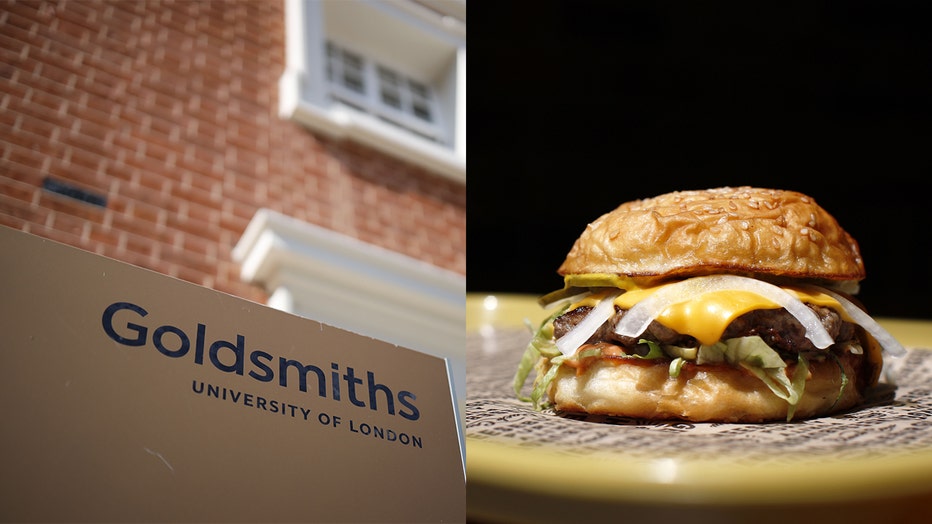 Left: A picture shows the facade of Goldsmiths University of London. Right: A burger is served. The university announced a ban on all beef products to fight climate change. (TOLGA AKMEN/AFP and Ben McCanna/Portland Press via Getty Images)

The university will implement a 10-pound tax on bottled water and single-use plastic cups, the proceeds of which will be funneled into a green student initiative fund.Significantly more solar panels will be installed at the university’s New Cross campus, and the university will switch to a 100-percent clean energy supplier as soon as possible.

The university will continue to invest in its existing garden as well as identify other areas where planting a garden could help absorb atmospheric carbon dioxide.

Lastly, Goldsmiths will improve the accessibility of curriculum options which investigate the subject of climate change and the role of individuals and organizations in reducing carbon emissions for all students.