LOS ANGELES - After skygazers were treated to two meteor showers last month, November will see the return of the Leonid meteor shower, set to light up the sky early this week.

"The Leonids will next peak on the Nov 16-17, 2020 night," the American Meteor Society writes on its website, adding the moon will be 5% full, making it easier to see from both hemispheres.

The Leonid meteor shower happens as a result of the comet 55P/Tempel-Tuttle, which has a 33-year orbit around the sun. The meteor shower is "debris from earlier returns that also happen to be most dense at the same time," AMS added.

AMS also notes that the Leonids overlaps with the Northern Taurids meteor shower, which peaked on Nov. 11-12.

RELATED: Jupiter, Saturn and Mars will be visible from Earth for the rest of November

When the comet returns in 2031 and 2064, it's possible there will be meteors in excess of 100 per hour, but it's likely that until then, skywatchers will see roughly 15 shower members per hour, with "perhaps an occasional weak outburst when the earth passes near a debris trail," AMS explained.

"This shower is called the Leonid shower because the meteors seem to come from a point in the constellation Leo," NASA states online.

The last Leonid meteor storm happened in 2002, according to the space agency. 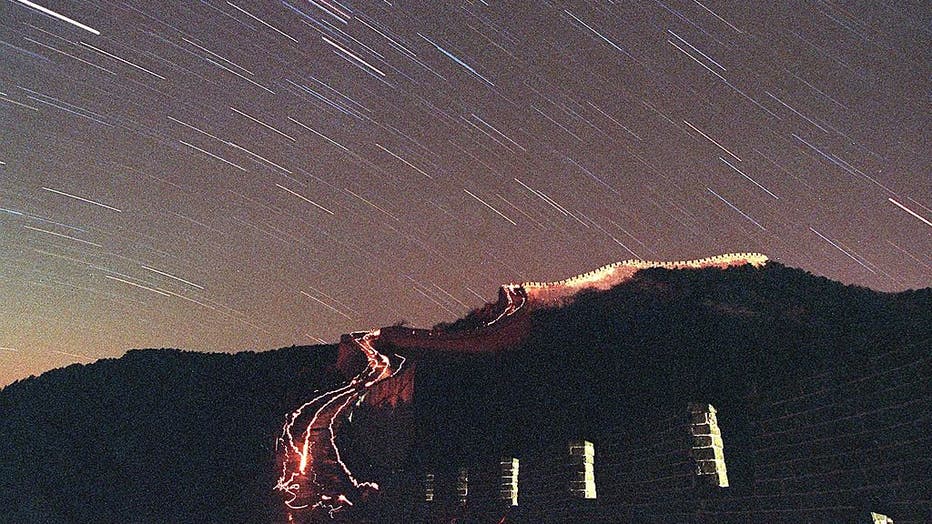 The Leonid meteor shower lights up the sky above China's Great Wall as stargazers brave the minus 20 degrees Celcius (minus 4 degrees Fahrenheit) temperature and walk up the wall with their flashlights 18 November in Badaling. (Photo credit: AFP PHOTO/Stephen SHAVER)

Despite this, they are considered a "major" shower by NASA, which added the Leonids are known for their fireballs and earthgazer meteors.

"Fireballs are larger explosions of light and color that can persist longer than an average meteor streak," NASA explained, due to their origination from "larger particles of cometary material."

"Earthgrazers are meteors that streak close to the horizon and are known for their long and colorful tails," the agency added.

The website timeanddate.com has details on when the meteor shower will be visible around the world.

A meteor forms when a meteoroid, a type of space rock that breaks off from an asteroid — a rocky body orbiting the sun — enters Earth's atmosphere. As soon as the space debris crosses over, it breaks down into what scientists call a "meteor," which then vaporizes and — as a result of friction — appears as a bright streak of light in the sky.

"Because of their appearance, these streaks of light some people call meteors 'shooting stars,'" NASA explains in a blog post. "But scientists know that meteors are not stars at all — they are just bits of rock!"

Other meteor showers this year include the Geminds and Ursids, both expected in December.