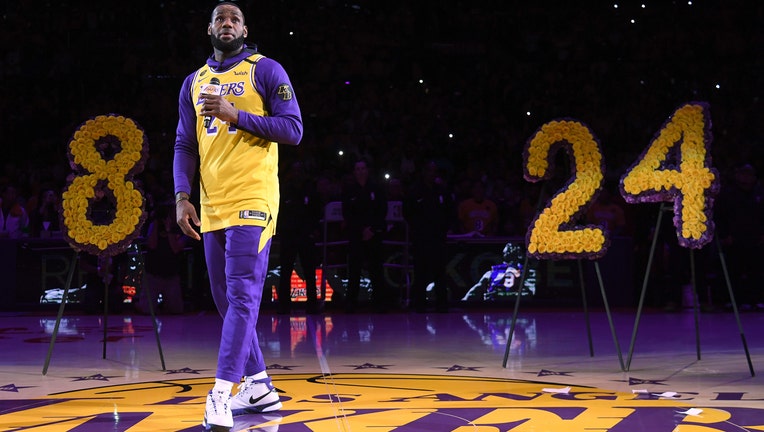 LeBron James speaks during the Los Angeles Lakers pregame ceremony to honor Kobe Bryant before the game against the Portland Trail Blazers at Staples Center on January 31, 2020 in Los Angeles, California.

Bryant’s own words then filled the arena.

"Once upon a time, there was a young basketball player who had dreams of becoming one of the greatest basketball players of all time," Bryant said at the beginning of a moving montage of his words, career and life that ended with Bryant telling fans, 'Mamba out!'"

The Lakers held a 24.2-second silence to honor Bryant, his 13-year-old daughter Gianna, known as "Gigi," and seven others who died when the helicopter he had chartered crashed into a Los Angeles County hillside Sunday. The length of the silence represented Bryant’s Lakers uniform number, 24, and Gigi's youth basketball number, 2. Two courtside seats draped with their jerseys were left vacant as well.

Carmelo Anthony, a close friend of Bryant's with the visiting Portland Trail Blazers, sat out the game, reportedly still too emotional about the tragedy to participate.

Outside the arena, legions of fans who didn’t have tickets to the game -- the Lakers' first since the tragedy -- watched the tribute on TV screens.

“I grew up with Kobe. I’m not a very emotional person but I’ve been crying all week,” Daniel Torres, who was wearing a Bryant jersey, said. “I can’t believe the outpouring and how many people loved him.”

But when Lakers star LeBron James stepped into the spotlight, the gravity of the moment came together.

Emotional and raw, James threw his prepared notes away.

“I’m going to go straight from the heart,” he said to cheers. “We’re all grieving, we’re all hurt, we’re all heartbroken.”

James said before he became a Laker he’d heard how Laker Nation was a "family."

“Everybody that’s here this is really truly, truly a family, and I know Kobe and Gianna and Vanessa and everybody thanks you guys from the bottom of their heart as Kobe said," James told the crowd. “Tonight we celebrate the kid that came here at 18 years of age, retired at 38 and became probably the best dad we’ve seen over the last three years, man."

During the game, both teams took violations – one for 24 seconds and one eight seconds – in honor of Bryant's numbers.

The Lakers lost 127-119 to the Trail Blazers, but the greater loss hung over every moment.