RALEIGH, N.C. - One of the leaders of a group in North Carolina opposing the governor’s stay-at-home orders aimed at slowing the spread of COVID-19 has reportedly tested positive for the virus.

Audrey S. Whitlock, an administrator on the ReOpen NC Facebook page that has helped organize recent protests in the state, posted a message saying she tested positive for the novel coronavirus and that her quarantine period ended on Sunday, Raleigh’s News & Observer reported.

“As an asymptomatic COVID19 positive patient (quarantine ends 4/26), another concern I have is the treatment of COVID patients as it relates to other communicable diseases. I have been forced to quarantine in my home for 2 weeks,” Whitlock wrote in part, according to the newspaper. 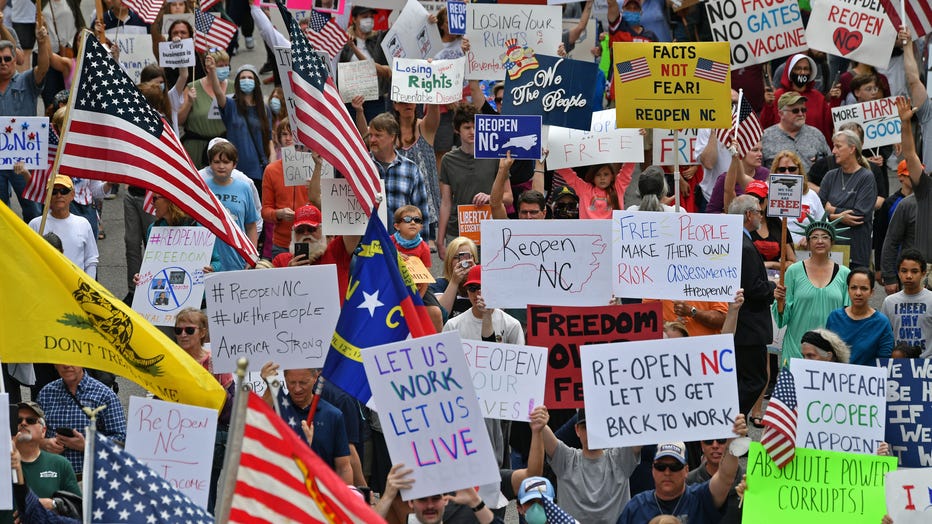 North Carolina Gov. Roy Cooper extended the state’s stay-at-home order through May 8, in addition to extending the closure of restaurants for dine-in services and other close-contact businesses.

In the Facebook post, Whitlock complained that the quarantine violated her civil rights, the News & Observer reported.

“I have been told not to participate in public or private accommodations as requested by the government, and therefore denied my 1st amendment right of freedom of religion,” Whitlock wrote, according to the paper. “If I were an essential employee, I would be denied access to my job by my employer and the government, though compensated, those with other communicable diseases are afforded the right to work. It has been insinuated by others that if I go out, I could be arrested for denying a quarantine order. However, the Americans with Disabilities Act prohibits discrimination by employers, places of public accommodation, and state and local government entities. Where do we draw the line?”

Many states have the power to fine and/or arrest those who violate quarantine or isolation orders, according to the Poynter Institute, a nonprofit journalism school and research organization.

ReOpen NC, a group that has held two protests in Raleigh demanding that Cooper reopen the state, has another rally planned Tuesday in the state’s capital, the newspaper reported.

It was unclear whether Whitlock attended any of the previous protests.