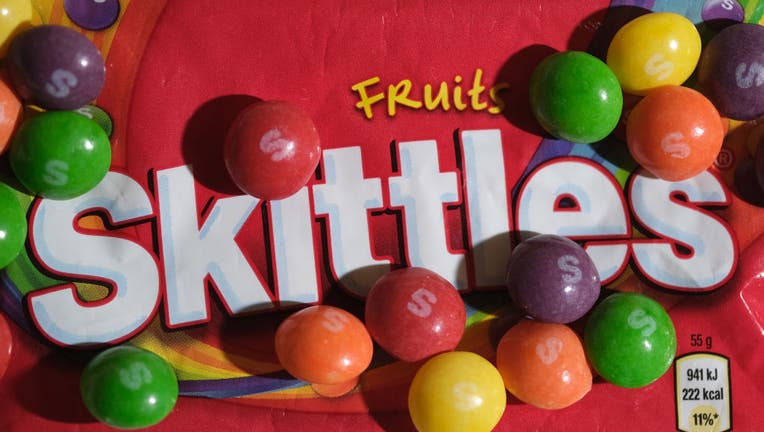 KATWIJK, NETHERLANDS - MAY 19: A package of Skittles, a fruit-flavored candy, produced by Wrigley Company, a division of Mars, Inc., is seen in this illustration photo on May 19, 2020 in Katwijk, Netherlands. (Photo by Yuriko Nakao/Getty Images)

A group of consumers are suing candy maker Mars, alleging Skittles contain a "known toxin" that makes the rainbow candies "unfit" to eat.

A class action lawsuit filed on Thursday in Oakland, California by San Leandro resident Jenile Thames alleged that Skittles are unsafe for consumers because they contain "heightened levels" of titanium dioxide.

Seeking class-action status filed in U.S. District Court for the Northern District of California on Thursday, attorneys for San Leandro resident Jenile Thames said that Skittles were unsafe for consumers because they contain "heightened levels" of titanium dioxideor, TiO2, as a food additive.

The lawsuit also said titanium dioxide will be banned in the European Union next month after a food safety regulator there deemed it unsafe because of "genotoxicity," or the ability to change DNA.

According to the lawsuit, titanium dioxide is used in paint, adhesives, plastics and roofing materials, and can cause DNA, brain and organ damage, and well as lesions in the liver and kidneys.

"A reasonable consumer would expect that [Skittles] can be safely purchased and consumed as marketed and sold," the complaint said. "However, the products are not safe."

OHIO MCDONALD'S FRANCHISE OWNER, A VETERAN, PAID WORKERS AMID CLOSURE: ‘I’VE BEEN IN THEIR SHOES'

In May 2021, the European Food Safety Authority announced that titanium dioxide "can no longer be considered safe as a food additive." However, the food additive is still legal in the United States.

According to the FDA's Code of Federal Regulation, "The color additive titanium dioxide may be safely used for coloring foods generally." However, the FDA regulates the quantity of titanium dioxide must not exceed 1% of the food's weight.

Thames, of San Leandro, California, said he bought Skittles at a local QuikStop in April, and would not have done so had he known.

Thames claims that checking the label would not have helped because the ingredients on Skittles' bright-red packages are hard to read.

Mars did not immediately respond to Fox News' request for comment.

Reuters contributed to this report. Read more of this story on FOX Business.