WINTER HAVEN, Fla. - Authorities say a two-year undercover investigation resulted in 85 arrests, the seizure of over $12.8 million worth of drugs, and the dismantling of an international drug trafficking organization whose ringleaders operated out of Winter Haven.

The Polk County Sheriff's Office said the investigation started in September 2020, when 32-year-old Demarcus Jefferson crashed his car into a Winter Haven gas station, killing a customer inside.

Sheriff Grady Judd said surveillance video from the gas station showed people in masks running up to the totaled vehicle and grabbing items from the car's trunk before deputies arrived at the scene. According to the sheriff, they were taking drugs out of the trunk so deputies wouldn't find them during their crash investigation.

Matt Murphy, who witnessed the 2020 gas station crash, told FOX 13 at the time that after the driver crashed through the building, an SUV showed up. The man in the SUV and the driver of the Kia unloaded whatever was in the trunk of the Kia into the SUV.

"As soon as the first sheriff’s office deputies showed up, the SUV took off," Murphy said. 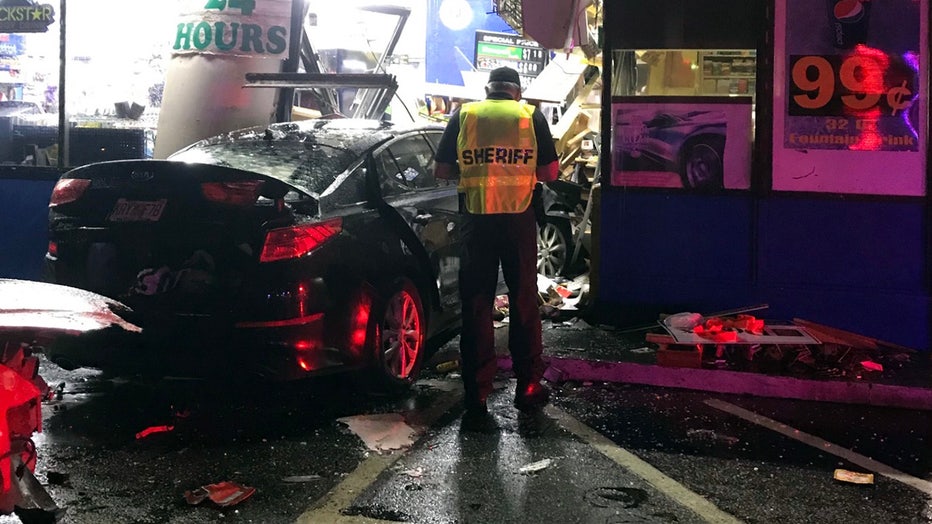 On Sept. 13, 2020, deputies say Demarcus Jefferson crashed his sedan into a Winter Haven gas station, killing a customer inside. Before investigators arrived, video showed other people arriving at the scene and pulling items out of the trunk of the c

While investigating the gas station crash, detectives received information that Demarcus and other members of the Jefferson family were involved in smuggling large amounts of methamphetamine through airlines in checked luggage on domestic flights from California.

Undercover detectives made multiple drug purchases at his Winter Haven home, learning that six months earlier, one of Demarcus' brothers, Devontae, died from a Fentanyl and Xanax overdose at that same house. However, the family continued to sell drugs at the home after Devontae's death, the sheriff's office said.

'They're peddling poison to your kids': Sheriff Judd on massive drug bust

The investigation was focused on a drug trafficking ring that smuggled cocaine and meth from Mexico, according to a Polk County Sheriff's Office news release. The operation went through California, Tennessee, and Orlando.

Detectives executed a search warrant in Winter Haven and seized a pound of methamphetamine while continuing to make undercover narcotics purchases from that point forward from dealers throughout the area.

The sheriff's office, working in conjunction with local, state and federal law enforcement agencies from across the country, began a wiretap investigation in February 2022 to monitor the trafficking ring's activity.

Investigators learned that the suspects smuggled large amounts of drugs from Mexico into California, then transported the drugs on domestic flights from Los Angeles through Memphis, Tennessee and then to Orlando International Airport. The drugs were then transported by ground from the airport into Polk County.

The sheriff detailed one occasion where the suspects smuggled six suitcases full of drugs on a flight from LAX to Orlando. 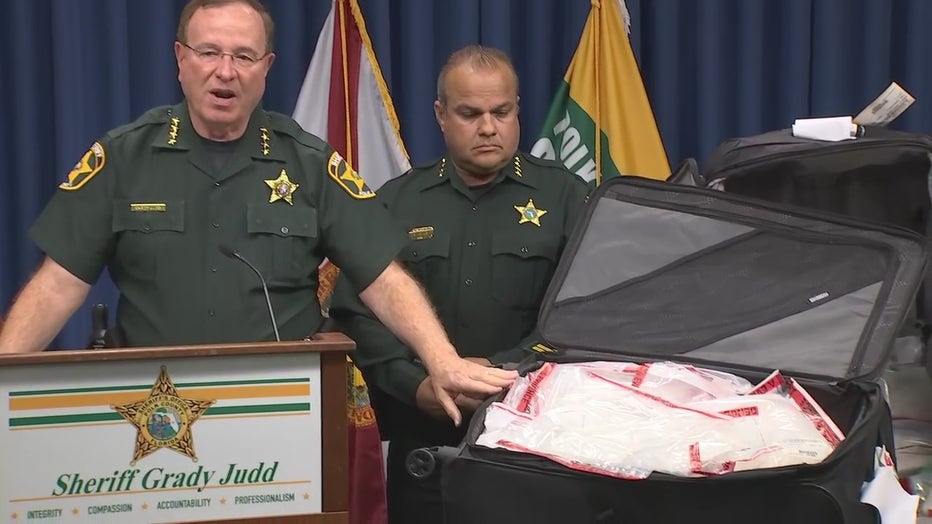 Polk County Sheriff Grady Judd shows one of the suitcases filled with drugs that was checked as luggage on a flight from LAX to Orlando.

"They didn’t as so much as throw a pair of underwear in the suitcase to act like they were hiding the drugs," Judd said in a Friday morning press conference. "You think LAX has got a drug smuggling problem at the airport? I believe that they do, and they need to address it ASAP." 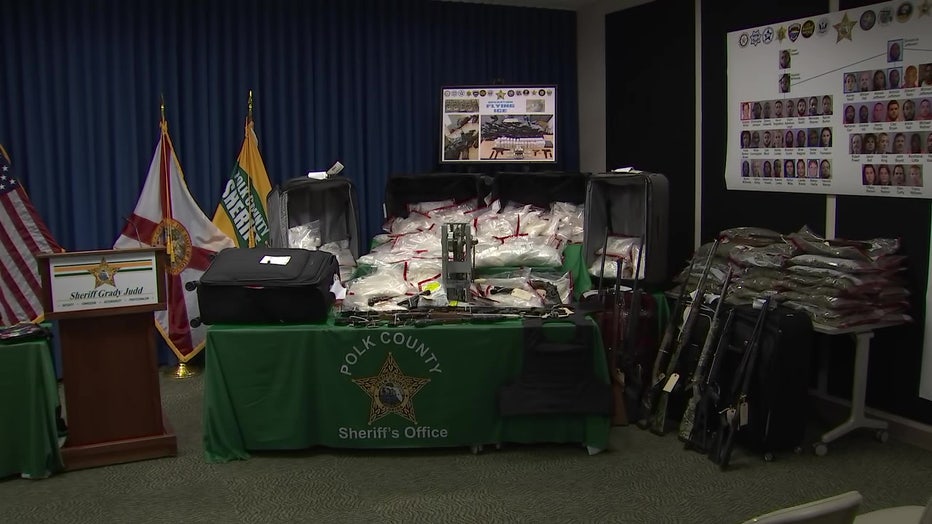 Detectives served 14 search warrants in Auburndale, Davenport, Polk City, Lake Wales, Winter Haven, and Riverview, as well as in Fresno, California, resulting in the seizure of the following:

The total street value of the confiscated drugs is more than $12.8 million, the sheriff's office said. The investigation resulted in the arrest of 85 suspects charged with a total of 355 felonies and 93 misdemeanors.

The sheriff's office said the suspects' previous criminal histories include a total of 194 felony convictions.