A new photo shows Kiely Rodni at a Truckee business hours before the 16-year-old went missing. She was last seen August 6, 2022 at a party at a campground in Truckee. Dive crews have begun searching a nearby lake for her.

A new photo of Kiely Rodni shows the missing 16-year-old hours before she vanished on August 6 in Truckee.

The missing teen was last seen at a party at a campground, but the security camera image shows her earlier in the night at a Truckee business.

The picture shows Kiely in a black bodysuit, green pants and black Vans shoes as she stood among racks of apparel and other merchandise. That photo was taken hours before she attended a party with hundreds of other young people at the Prosser Family Campground, according to the Placer County sheriff's office. 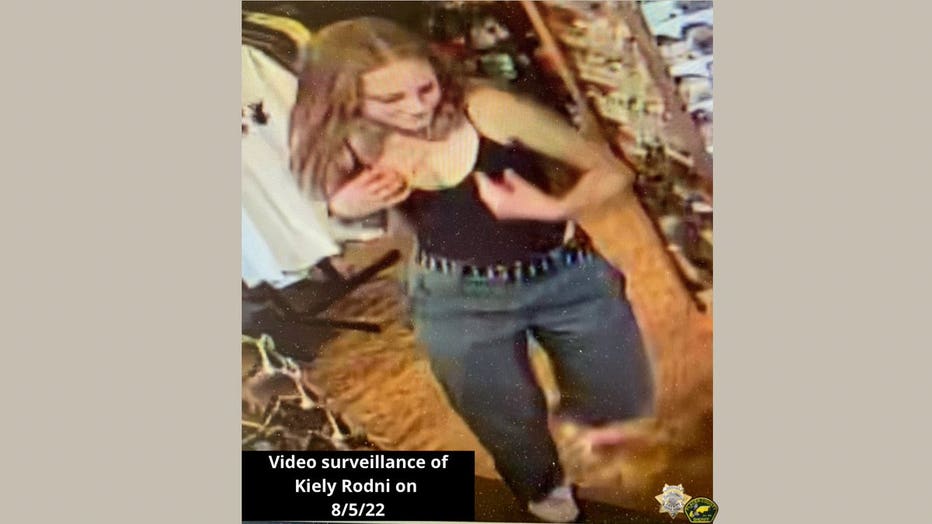 Kiely Rodni, 16, is seen on surveillance video hours before she vanished after attending a party at a Truckee campground on Aug. 6, 2022.Photo: Placer County Sheriff

The search for Kiely has widened in recent days with 265 officers from local, state, and federal agencies combing the campground and other nearby areas. Dive teams have started searching the Prosser Reservoir for signs of her or her Honda CRV, which has also not been found.

Kiely texted her mother to say she was going home from the party. Her cellphone pinged shortly after that, but has been inactive for days, the sheriff's office said.

Search and rescue crews in Truckee plan to keep looking for Kiely Rodni, a 16-year-old who has not been seen since attending a party at a campground in Truckee.

The sheriff's office has reportedly said they were looking to see if Kiely had been abducted, although officials said Tuesday that this was still a missing person case.

Her mother had made a heartfelt plea for her return in a video released earlier this week.

"We just want her home. We're so scared. We miss her so much and we love her," her mother Lindsey Rodni-Nieman said as she choked back tears in a video shared by the sheriff's office. "Kiely, we love you, and if you see this, please just come home. I want nothing more than to hug you."