The FDA warns people not to take the drug ivermectin, used to treat parasites in livestock, to treat or prevent COVID-19.

WEST CHESTER, Ohio - An Ohio judge ruled this week that a hospital cannot be forced to treat a severely ill COVID-19 patient with ivermectin, reversing an earlier decision by another judge that required the facility to administer the parasite drug despite U.S. Food and Drug Administration warnings.

Butler County Common Pleas Court Judge Michael A. Oster Jr. ruled Monday that "based on the current evidence, ivermectin is not effective as a treatment for COVID-19," court documents show.

Ivermectin, a decades-old drug used to treat worms and other parasites in humans and animals, has received renewed attention during the pandemic. Its use to treat COVID-19 has been promoted by some doctors, Republican lawmakers, and even popular podcast host Joe Rogan, amplified on social media by many who remain resistant to getting vaccinated. It has also been widely used in other countries, including India and Brazil.

But health experts and medical groups have warned that it can cause harmful side effects and there is little evidence that it helps treat the virus. Still, more Americans have been turning to the cheap drug amid a fourth wave of infections.

In his 11-page ruling, Oster noted advisories from the U.S. Food and Drug Administration, the Centers for Disease Control and Prevention and various medical associations that have warned against using the drug as a COVID-19 treatment.

Oster also said that much of the current research into using ivermectin to treat virus patients have had "inconsistent results," "were of low quality or low certainty," and also noted the withdrawal of a widely touted non-peer-reviewed study due to fraudulent data.

Another judge had previously issued a temporary injunction, ordering doctors at West Chester Hospital to administer the medication to 51-year-old Jeffrey Smith, who was admitted to the hospital’s intensive care unit.

Smith tested positive for COVID-19 on July 9 and was later admitted to the ICU on July 15, where he remains today, court documents show. His condition continued to decline and he was placed on a ventilator on Aug. 1.

His wife, Julie Smith, had asked the hospital to prescribe ivermectin, believing it was the only option to keep her husband alive, but the hospital refused — citing a lack of FDA approval. She then independently consulted and obtained a prescription from Dr. Fred Wagshul, a proponent of ivermectin use for COVID-19, but the hospital still refused.

Julie Smith then filed the lawsuit on behalf of her husband in an attempt to require West Chester Hospital to treat him with ivermectin.

Oster said in his decision that Wagshul could not confirm during court hearings if the medication’s continued use would benefit Smith, but he noted that the patient’s condition "seems to be" getting better after receiving it.

"Dr. Wagshul prescribed the medication without having seen Jeff Smith and does not have privileges at West Chester Hospital," Oster’s ruling reads.

Oster added in his ruling that "everyone involved wants Jeff Smith to get better."

"Simply stated, there are no bad actors in this case. Just the bad of a worldwide pandemic, COVID-19," he said.

The Smiths’ attorney, Jonathan Davidson, told NBC News he was disappointed by the judge’s decision.

"While he has likely received his last dose at UC West Chester hospital, we can only hope his condition continues to trend positively," Davidson told the outlet, adding that his client’s condition had stabilized and is improving. 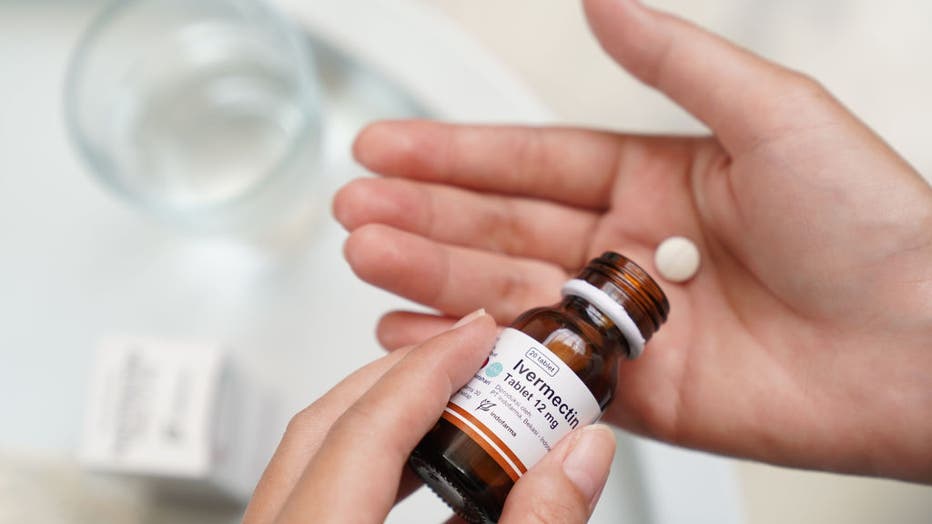 A tablet of ivermectin arranged in Jakarta, Indonesia, on Thursday, Sept. 2, 2021. The U.S. Food and Drug Administration warned Americans against taking ivermectin, a drug usually used on animals, as a treatment or prevention for Covid-19. Photograph

Ivermectin is approved by the FDA to treat infections of roundworms and other tiny parasites in humans and animals like cows, horses and dogs. Tablets are used for internal parasites while ointments are used to treat head lice and other skin infections. The generic drug works by paralyzing the worms and killing their offspring.

The FDA has tried to debunk online claims that animal-strength versions of the drug can help fight COVID-19.

"Taking large doses of this drug is dangerous and can cause serious harm," the FDA warned in a public advisory. The drug can cause nausea, vomiting, diarrhea, seizures, delirium and even death, said the agency.

Large studies are now underway in the U.S. and overseas to determine if the drug has any effect on preventing or blunting COVID-19.

"We implore all members of the community to do what we know works: wear a mask, become fully vaccinated and use social distancing whenever possible," UC Health spokesperson Kelly Martin told the newspaper. "At UC Health, we respect the expertise of our clinicians and appreciate the scientific rigor used to develop treatments, medications and other therapies.