FOX 5's Jim Lokay was outside of Nationals Park on Friday evening talking to Nationals fans about Juan Soto's return to D.C. for the first time since being traded to the San Diego Padres.

WASHINGTON - As Juan Soto began the walk to the visitors’ clubhouse at Nationals Park on Friday for the first time as an opposing player, he passed photos hanging on either side of the tunnel showing past Washington players — a gallery that already includes an image of him, smiling in a blue jersey with a red No. 22.

Then he ran into reliever Sean Doolittle, a teammate on Washington’s 2019 World Series-winning squad, and they hugged and laughed before Soto ducked into the San Diego Padres’ clubhouse.

The Nationals traded their homegrown, 23-year-old star to the Padres on Aug. 2, a move that would have been shocking a year or even months earlier. But not much has gone right for Washington since that 2019 title, making a long-term deal with Soto unlikely and motivating general manager Mike Rizzo to swap him and first baseman Josh Bell for a slew of San Diego’s top prospects. 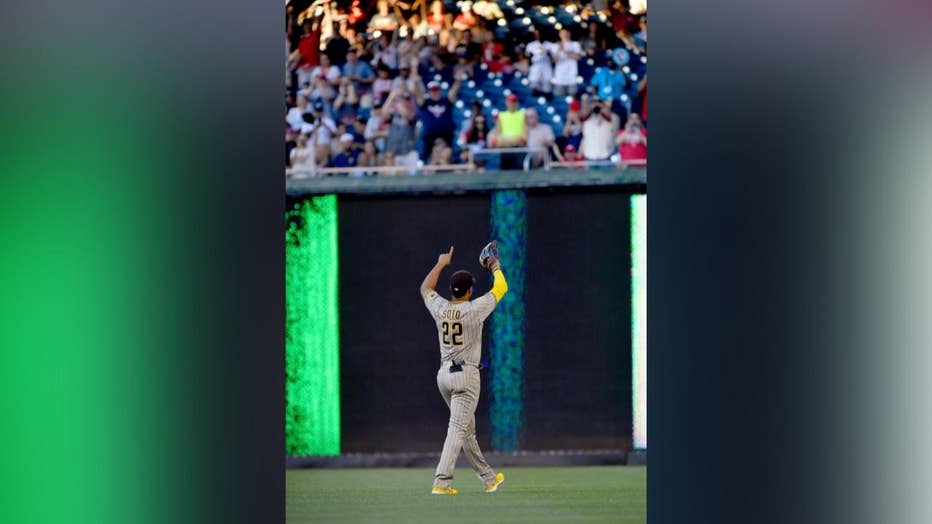 Ten days later, Soto was back — and a bit surprised by the horde of reporters who formed a cramped horseshoe around him in the Padres’ dugout before the game.

"I didn’t know that so many people (were) going to be around me," Soto said. "I know it’s the media and everything, but it feels kind of weird."

Soto was struck by the oddity of returning to Washington so quickly after the trade. He realized his return trip was less than two weeks away and told teammates, "It’s not goodbye, it’s see you later."

Juan Soto made his return to Nationals Park Friday for the first time since being traded to the San Diego Padres, and was greeted with a standing ovation from Nationals fans.

He said fitting in with the Padres has been "amazing" and an easy transition.

Soto made his debut on May 20, 2018, at age 19, and evolved from eye-popping teenager to World Series champion to a future free agent the Nationals felt they could not afford. His potential destination was the dominant storyline in baseball ahead of the trade deadline.

FOX 5's Jim Lokay spoke with a pair of San Diego Padres fans from North Carolina, who drove up to D.C. to watch Juan Soto make his return to Nationals Park.

Fans in Soto jerseys watched him take batting practice in a brown long-sleeve shirt and high brown socks. Before the game, Soto expressed he wasn't sure how Nationals fans would receive him during his return, but added that he’s proud of what he achieved in Washington, where he became one of baseball’s best hitters and most popular players.

What Nationals fans had for Soto was a standing ovation during his first at-bat, the ultimate sign of respect a fan base can give.

"Pretty cool," Soto said. "It was a pretty exciting moment for me."

As part of the welcome back, the Nationals also put together a highlight package of Soto, and Soto thanked Washington fans in a prerecorded video he put together Aug. 7.

Soto said he was happy to see his "teammates" again before quickly correcting himself to say "ex-teammates."

23-year-old star had two hits during the game, and the San Diego Padres beat the Nationals 10-5.