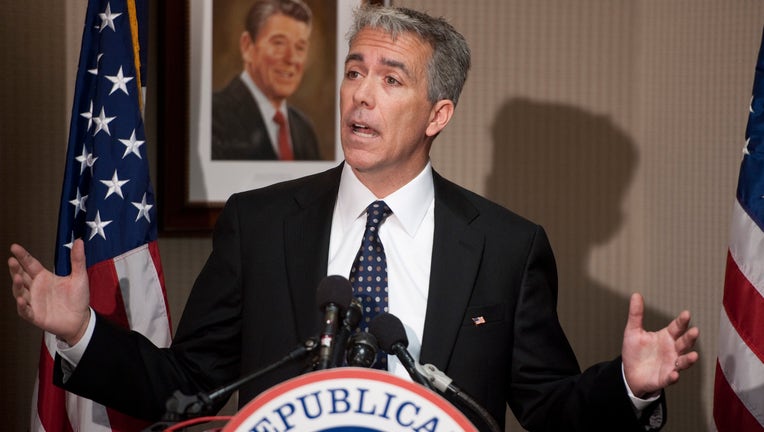 Joe Walsh addresses the Republican National Committee after his election to Congress in 2010. (Getty Images)

Former Illinois Congressman Joe Walsh announced Sunday morning that he is running for president as a Republican, challenging President Trump in the GOP primary race, while delivering a blistering attack on the president's character and qualifications.

Walsh blasted the president for his social media habits and general behavior.

"I'm running because he's unfit; somebody needs to step up and there needs to be an alternative," Walsh said. "The country is sick of this guy's tantrum -- he's a child."

At the same time, Walsh recognized that he himself is guilty of the same behavior as the president, and even played a part in the division in Washington that led to Trump's election.

"I helped create Trump," the Tea Party favorite told ABC News' George Stephanopoulos in an interview that aired Sunday morning. "I feel responsible for that."

Walsh claimed that Trump was "tweeting us into a recession" and warned that "he'll tweet us into war."

Stephanopoulos called out Walsh for making outlandish statements of his own, including calling former President Barack Obama a Muslim and an enemy. Walsh said Trump "made me reflect on some of the things I've said in the past," acknowledging that at times he "went beyond the policies and idea" and "said some ugly things about President Obama that I regret."

When asked if he truly believes what he said about Obama, Walsh responded, "God no, and I have apologized for that."

During the same interview, however, Walsh made a series of personal attacks against President Trump.

"He's nuts, he's erratic, he's cruel, he stokes bigotry," Walsh said. He accused Trump of not caring about America, saying, "the only thing he cares about is Trump."

Walsh also cited Trump's 2016 campaign promise to build a wall along the southern border and to have Mexico pay for it, which has not happened.

"He’s incompetent. He has no freakin’ clue what he’s doing," Walsh said.

The Trump campaign had far fewer words in response to Walsh's announcement.

Walsh, who served one term in Congress, acknowledged that he has very little chance of defeating the president in the primaries, but said he wants to promote a different direction for the Republican Party. Earlier in August, Walsh published a New York Times op-ed about the need for Trump to face a primary challenge. He said the positive response to the piece inspired his decision to run.

Former Massachusetts Governor Bill Weld has previously announced that he is running against Trump in the primaries.