Jane Fonda is spending the night in the D.C. Jail after being&nbsp;arrested for the 4th week in a row following a climate change protest Friday, according to a spokesperson.

WASHINGTON (FOX 5 DC) - Jane Fonda is spending the night in the D.C. Jail after being arrested for the 4th week in a row following a climate change protest Friday, according to a spokesperson.

The longtime actress and activist has temporarily moved to D.C. for the sole purpose of staging a climate change protest every Friday at the U.S. Capitol, where it’s a misdemeanor violation for protesters to block the entrance. Police have put Fonda in plastic cuffs and taken her to jail for the last three weeks, but she’s hasn’t had to stay overnight yet, until now.

Fonda will turn 82 in December.

“I think I may be in jail for my 82nd birthday,” Fonda said.

Last week, actor Ted Danson joined her for her rally and this Friday she expected actress Catherine Keener and Patricia Arquette to join her. 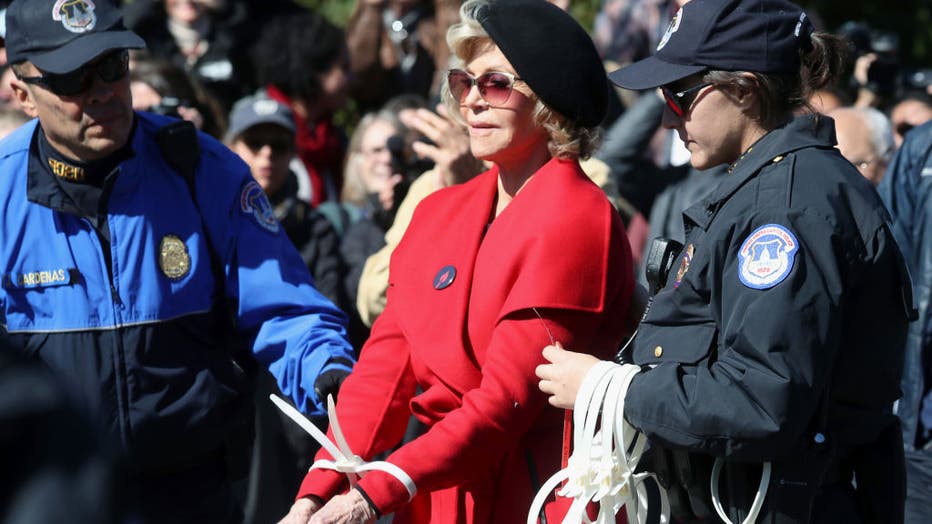 WASHINGTON, DC - OCTOBER 18: Actress Jane Fonda is arrested for blocking a street in front of the U.S. Capitol during a “Fire Drill Fridays” climate change protest and rally on Capitol Hill, October 18, 2019 in Washington, DC. Protesters are demandin

She dismissed critics who say she’s getting arrested for the performance.

The dire warnings about global warming are relentless. A new study out this week says the number of people threatened by flooding triggered by climate change is three times higher than previously thought with close to 300 million at risk in the next three decades.

“The only way is to have massive numbers in the streets protesting on an unprecedented scale,” Fonda said.

FOX 5 asked if she believes there will be enough of that pushback and outrage to inspire change.

“Yes I think so,” she said. “As more and more people recognize this is not something that’s going to happen in the future. This is right now.”