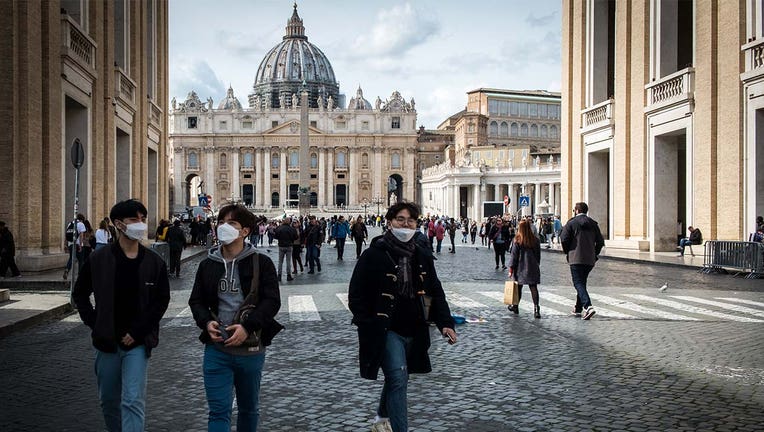 Tourists in St. Peter's Square and along Via della Conciliazione, wear anti-virus masks to protect themselves from coronavirus infection, in Italy on February 29, 2020 positive results to coronavirus There are 888 people infected by the new coronavir (Andrea Ronchini/NurPhoto via Getty Images)

Italy will reopen its borders next month after months of lockdown due to the coronavirus pandemic, the government announced.

Both international and regional borders will open June 3 in an attempt to revive Italy’s tourism industry. The summer season is about to start, and tourism accounts for 13 percent of the country's GDP.

“We hope to work with the neighboring countries, those who can travel by car,” said Gianni Serandrei, owner of the 4-star Hotel Saturnia near St. Mark’s Square in Venice.

The hotel’s last guests -- determined honeymooners from Argentina -- checked out around March 11, two days after Italy started its national lockdown, including border closures.

Italy’s national hotel federation said that by April the sector had already shed 106,000 jobs, with occupancy dropping by 99 percent for foreigners and 96 percent for Italians. Another half-million jobs are at risk if the summer season isn't successful, according to the association.

Italy is hoping also to encourage domestic tourism, offering vouchers to lower income families to spend at hotels, campgrounds and other establishments before the end of the year.

Neighboring countries are not as keen to see Italy so willingly open its borders.

Germany -- whose border is about a 4-hour drive from Venice through Austria -- is instructing citizens not to travel abroad for tourism until at least June 15. Officials in neighboring France made clear that they had sought a coordinated European effort on border openings, indicating Italy had jumped the gun.

To illustrate the importance of arrivals from nearby countries, Eurostat figures show that French overnight stays in Italy hit 14 million last year, while those from Germany came in at 13.6 million, edging Italians themselves at 13.5 million. Spaniards were the top Italian tourists, with 14.6 million stays.

Italy has managed to flatten its curve and curb the number of new infections and deaths. On Saturday, Italy added 789 confirmed coronavirus cases, bringing the total to 223,885. There were 242 new deaths, raising the toll to 31,610.