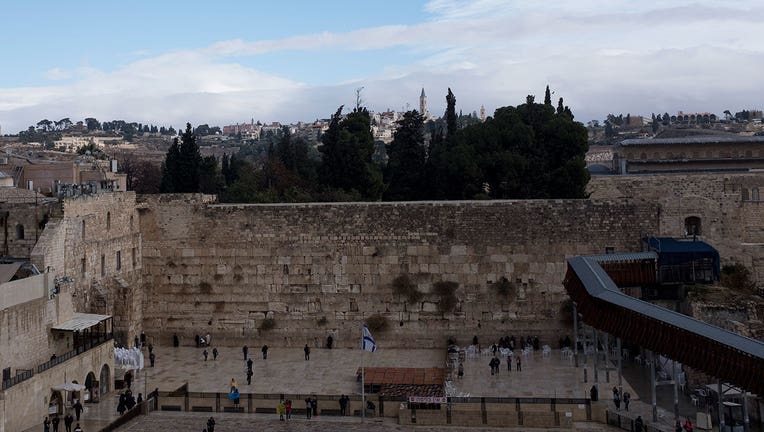 JERUSALEM (AP) - Israel's transportation minister is pushing ahead with a plan to dig a railway tunnel under Jerusalem's Old City, passing near sites holy to Jews, Christians and Muslims - and ending at the Western Wall with a station named after President Donald Trump.

Yisrael Katz's plan, currently in the initial stages, involves constructing two underground stations and excavating over 2 miles (3 kilometers) of tunnel beneath downtown Jerusalem and under the politically sensitive Old City. The project would extend Jerusalem's soon-to-open high-speed rail line from Tel Aviv to the Western Wall, the holiest site where Jews can pray.

The route will run close to - but not directly under - the Church of the Holy Sepulchre, where tradition holds that Jesus was crucified and buried, and a contested holy site known to Jews as the Temple Mount and to Muslims as the Noble Sanctuary. Previous excavations by Israel near the holy site - the spiritual epicenter of the Israeli-Palestinian conflict - have sparked violent Palestinian protests.

Because of those sensitivities, the proposal will likely meet with heavy resistance from the Palestinians, neighboring Arab countries and the international community.

Katz, a senior Cabinet official who also serves as Israel's intelligence minister, is a close ally of Prime Minister Benjamin Netanyahu and is seen by many as his likely eventual successor as head of the Likud party.

Transportation Ministry spokesman Avner Ovadia said Wednesday the project is estimated to cost more than $700 million and, if approved, would take four years to complete.

Katz's office said the minister advanced the plan in a recent meeting with Israel Railways executives, and has fast-tracked it in the planning committees.

Katz said a high-speed rail station would allow visitors to reach "the beating heart of the Jewish people - the Western Wall and the Temple Mount." He proposed naming the station after Trump "for his brave and historic decision to recognize Jerusalem as Israel's capital" earlier this month.

Trump's announcement has enraged the Palestinians and much of the Muslim world. The U.N. General Assembly overwhelmingly adopted a resolution last week condemning the move, with several traditional American allies breaking with Washington to vote in favor of the motion.

Israel captured east Jerusalem, which includes the Old City, in 1967, and annexed it in a move not recognized internationally. The Palestinians claim east Jerusalem as the capital of their future state, and a longstanding international consensus holds that the fate of the city should be decided through direct Israeli-Palestinian negotiations.

Digging railway tunnels to the Western Wall would also entail excavating in Jerusalem's Old City, where religious and political sensitivities - as well as layers of archaeological remains from the city's 3,000-year history - could make for a logistical and legal quagmire.

Last year an initiative to convert an already excavated area abutting the Western Wall into an egalitarian Jewish prayer section was hotly contested by Israeli archaeologists, who said such a move would cause irreparable damage to the historic remains of the ancient city.

Despite the likely opposition to the project, Ovadia said he expects the plans to be approved in the coming year, barring major complications. The Tel Aviv-Jerusalem high-speed line is expected to open next spring.

"There's no reason why this train won't be built," he said. "We already know how to deal with no less difficult opposition."

Katz has previously proposed other ambitious infrastructure projects, including an artificial island off the coast of the Gaza Strip that would serve as an air and seaport for the Palestinian territory, and a railway connecting Israel with Saudi Arabia and other Arab states.