LOS ANGELES - iPhone owners will soon be able to add a digital copy of their COVID-19 vaccination card to their Apple Wallet, thanks to an upcoming software update.

A spokesperson for Apple confirmed that while the feature to add a COVID-19 vaccination card specifically to Apple Wallet is not available just yet, it will be in an upcoming update.

For now, the most recent iOS 15 update released on Sept. 20 allows users to add their vaccination status to their health app where other health information including medications and health status can already be documented.

According to an Apple developer blog post published Tuesday, iPhone users can download and store verifiable health records, including COVID-19 vaccinations and test results in the phone’s health app.

"Users can choose to share verifiable health records stored in the Health app with approved third-party apps requesting this information, like airlines, event venues, and other businesses that facilitate in-person interactions," the developer blog reads. 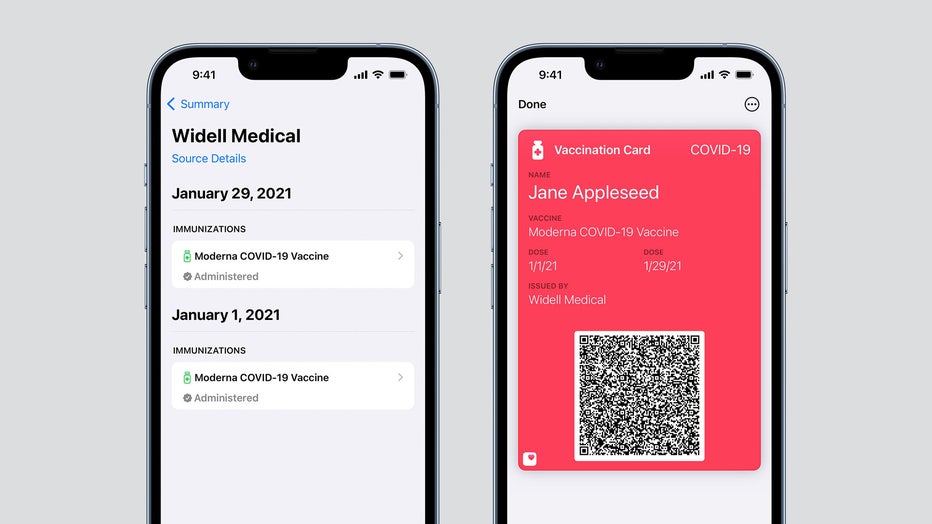 Apple to soon allow iPhone users to add their COVID-19 vaccine cards to their Apple Wallet's.

The new update comes as a rapidly growing number of cities across the U.S. are requiring people to show proof they have been inoculated against COVID-19 to teach school, work at a hospital, see a concert or eat inside a restaurant.

New York City, New Orleans, San Francisco and Los Angeles were among some of the first cities to impose such rules at many businesses last month.

The measures are an attempt to stem the rising tide of COVID-19 cases that has pushed hospitals to the breaking point.

When New Orleans imposed its vaccination mandate in August, Mayor LaToya Cantrell called proof of vaccination the best way to protect businesses. She said she is not imposing capacity limits or contemplating a shutdown similar to the one that devastated businesses in 2020.

"Unlike this time last year, we have a tool that we did not have," she said, referring to vaccines.

Last month, Louisiana set daily records for the number of people hospitalized with COVID-19, reaching 2,907 patients on Aug. 13. Ninety-one percent of those hospitalized were unvaccinated, according to state data.

Meanwhile across the nation, more Americans have now died from COVID-19 than did in the 1918-19 Spanish flu pandemic — approximately 675,000.

This grim statistic is prompting health and state officials to sound the alarm on the need for more Americans to get vaccinated.