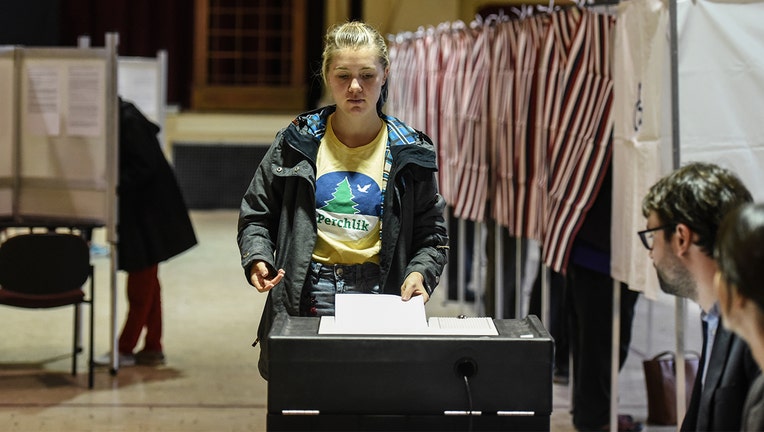 FILE: People stand at voting booths while casting their vote at the Montpelier Town Hall on Nov. 6, 2018 in Montpelier, Vermont. Turnout is expected to be high nationwide as Democrats hope to take back control of at least one chamber of Congress. (Ph

An official from the Office of the Director of National Intelligence told Fox News that the director of the National Counterintelligence and Security Center, within ODNI, Bill Evanina, has been leading the election threat briefings.

The official told Fox News that the briefings are led by Evanina and his team, but said that FBI and the Department of Homeland Security officials and other agencies often are present.

“The steps we have taken thus far to inform the public and other stakeholders on election threats are unprecedented for the Intelligence Community,” Evanina’s office said in a statement. “We will continue to provide updates.”

Evanina was tapped in May to handle briefing presidential candidates, their campaigns and major political parties on election security threats. The defensive briefings from the intelligence community come after it was determined from U.S. intelligence agencies that Russia interfered in the 2016 election.

Intelligence officials have said that Russia interfered through social media campaigns and through stealing and distributing emails from Democratic accounts. The intelligence community has long maintained that Russia was trying to boost Donald Trump’s campaign and add chaos to the American political process.

Special Counsel Robert Mueller concluded that Russian interference was “sweeping and systematic,” but he did not find a criminal conspiracy between Russia and the Trump campaign.

Evanina warned that the intelligence community is “primarily concerned” with China, Russia and Iran “seeking to compromise” the 2020 presidential election.

Evanina, earlier this month, said those rival nations once again are attempting to influence U.S. policy and elections in a variety of ways, declaring that Iran wants to “undermine” President Trump while Russia is working to “primarily denigrate” former Vice President Joe Biden.

Evanina also said earlier this month that China “prefers” that Trump “does not win reelection” in November.