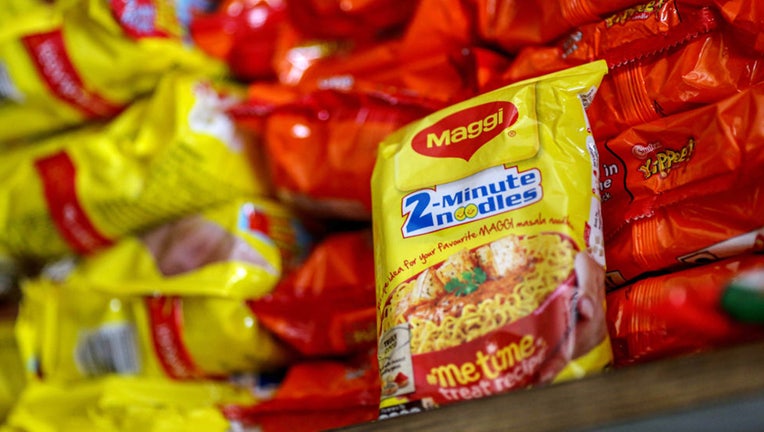 FILE - Packets of Maggi 2-Minute Noodles, manufactured by Nestle India Ltd., at a grocery store, known as a kirana, in Bengaluru, India, on Monday, Jun. 21, 2021. (Dhiraj Singh/Bloomberg via Getty Images)

Many couples divorce due to irreconcilable differences, money troubles, infidelity, or just plain ole falling out of love. But one couple out of India divorced for a very unique reason and it involves noodles.

"Enough is enough," is probably what one Indian man was thinking when he reportedly divorced his wife because the only thing she cooked for him was instant noodles — breakfast, lunch and dinner, according to The New Indian Express.

"The husband said his wife did not know how to prepare any food other than Maggi noodles. It was noodles for breakfast, lunch and dinner. He complained that his wife went to the provision store and brought only instant noodles," the presiding judge over the divorce case told the news outlet.

The judge reportedly referred to the case as the "Maggi case," the Express said.

Under Indian law, couples seeking a divorce must wait a full year in case they can work things out.

While a reunion of the couple is preferable, Judge ML Raghunath told the Express that out of 800 to 900 divorce cases seeking to reunite, only 20 to 30 succeed.

"Divorce cases are increasing drastically over the years. Couples have to stay together for at least a year before seeking divorce. If there was no such law, there would be divorce petitions filed directly from wedding halls," Raghunath told the Express.

RELATED: 'Very unlucky' Indian couple sues son for $675,000 for not giving them grandchild

Divorce rates saw a steady increase across the globe since the 1970s but trends tend to vary from country to country, according to the Our World in Data’s website.

For instance, at the height of the COVID-19 pandemic, the added stress and economic uncertainty thrust upon American families coincided with a dramatic surge in divorces after a steady decline since the 1970s, according to Our World in Data’s website.

And while divorce numbers have leveled out and are on the decline once more, the number of people getting married is still decreasing.

There were 1.7 million weddings in America in 2020, a drop of 17% from the year before and the lowest recorded since 1963, the Centers for Disease Control and Prevention said this past May.

The plunge was not exactly a surprise since the U.S. marriage rate had been on the decline since 2016.

The pandemic threw many marriage plans into disarray, with communities ordering people to stay at home and banning large gatherings to limit the spread of the coronavirus.

The CDC found that 46 states reported declines in marriage rates in 2020. Hawaii saw the largest drop in the country — 48% — followed by California, which fell 44%.

Nevada — long a popular wedding destination — continued to have the nation’s highest marriage rate. But even that state saw a 19% decline in the first year of the pandemic. Four states reported marriage increases — Montana, Texas, Alabama, and Utah, the CDC said.

Wedding planners last year said they saw a rebound, with the rescheduling of postponed ceremonies. But some experts said it’s hard to know when U.S. marriages might return to pre-pandemic levels.

"It’s not been a great time for romance," said John Santelli, a professor at Columbia University’s school of public health.