Getting DC back to normal

It’s not clear how long the barbed-wire fencing surrounding the U.S. Capitol is going to stay up, but we did see plenty of other barriers come down Thursday in DC.

WASHINGTON (FOX 5 DC) - There is still an incredible level of security in D.C. following the inauguration of President Joe Biden and Vice President Kamala Harris.

D.C. Deputy Mayor John Falcicchio said Wednesday that crews started the work of taking down fences and barriers on major streets starting at 6 p.m. He said that work would take about 36 hours to complete.

"They will also begin opening garages that were blocked as a precaution. This will take some time. Give crews time/space to work safely," Falcicchio said on Twitter.

READ MORE: When barriers, fencing will begin to come down after Inauguration Day in DC

There is still an incredible level of security in D.C. following the inauguration of President Joe Biden and Vice President Kamala Harris.

Members of the National Guard remained stationed around the city Wednesday night.

A National Guard spokesman said typically there are 8,000-10,000 members of the National Guard in D.C. for Inauguration Day, the day before and the day after. This year there were 25,000 members because of heightened security concerns after the insurrection at the Capitol.

A press release sent out Thursday afternoon from the National Guard says that 10,600 members will remain on duty in the District and 15,000 will be returning home within the next five to 10 days.

Mayor Muriel Bowser and her team confirmed at a press conference on Thursday that the D.C. National Guard will be maintaining a presence in D.C. through Jan. 30 mainly for traffic and crowd control reasons. Mayor Bowser says the District will continue to evaluate their need after that. 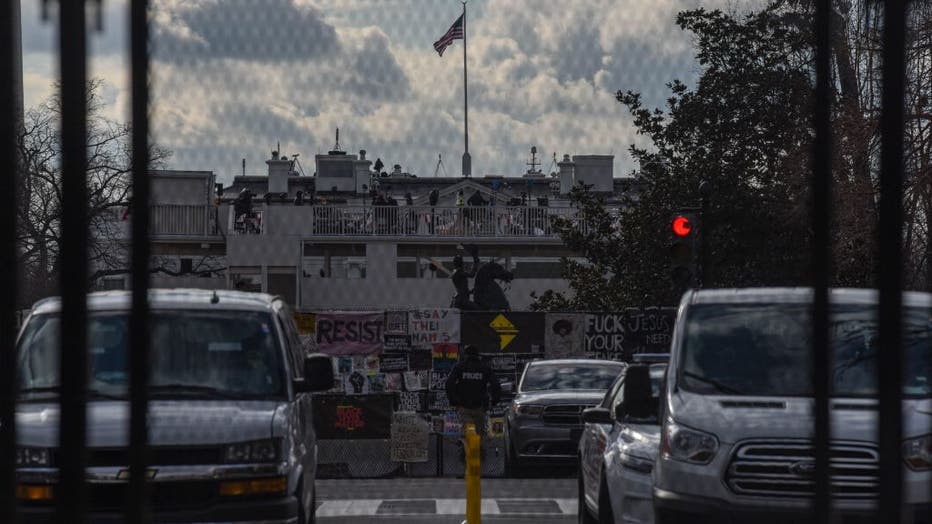 The White House as seen from Black Lives Matter Plaza ahead of the 59th U.S. Presidential Inauguration in Washington, DC, January 20,2021. (Photo by SETH HERALD/AFP via Getty Images)

Chris Rodriguez, director of D.C. Homeland Security and Emergency Management Agency, said guardsman may have a presence in the city moving forward.

He said conversations are underway about the role of the National Guard in continuing to provide security, especially at the Capitol.

"A lot of what we’re going to be seeing in the next several days, weeks and even months-and we’ve said this before: the threat of right wing extremism is not going away," said Rodriguez. "And so we have to work with all of our federal partners to make sure that we have proper security in the District and that we are doing what we need to do in order to plan and prepare."

When will DC start to look ‘normal’ again?

There are still a lot of security features in the District after Inauguration Day, which has many residents asking, when will the city start to look somewhat normal again?

He said Secret Service handles fencing and barriers around the National Mall, but it should start to come down soon.

Metro stops in downtown D.C. that were closed today will remain closed Thursday and reopen on Friday.

Also, on Friday, as the city more fully reopens, D.C. restaurants will be able to reopen indoor dining at 25 percent capacity.

FOX 5 asked Rodriguez if there has been an online chatter among people or groups planning to come to D.C. in the days ahead.

"We continue to monitor the right wing extremist groups that are espousing violence and hate," Rodriguez said. "And so we are seeing some indications of future First Amendment events. We’ll continue to monitor them and work with Park Police, Capitol Police and the FBI to make sure that we’re sharing information and that we all have a common operating picture."