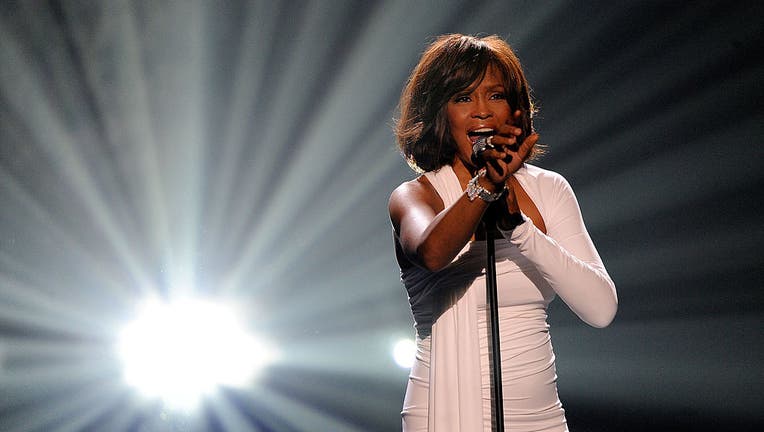 BURBANK, Calif. (AP) - Whitney Houston is about to appear on the concert stage again.

Eight years after her death, a holographic Houston will embark on a European tour that starts in England on Feb. 25 and runs through early April, with U.S. dates expected to follow.

“Now is just the right time," said Pat Houston, the singer's sister-in-law, former manager and the executor of her estate, which is producing the show in collaboration with BASE Hologram. “In the spirit of Whitney, I know we're doing all the right things right now.”

Last week, a few dozen members of the media were given a dress-rehearsal preview in Burbank, California of most of “An Evening With Whitney: The Whitney Houston Hologram Tour," which features a Houston projected onto a nearly invisible scrim on a stage with real dancers and a live backing band.

The concert set includes most of her biggest hits — “How Will I Know," “Saving All My Love For You,” “I Will Always Love You,” along with some unexpected rarities, including a cover of Steve Winwood's “Higher Love” that Houston first recorded three decades ago.

The show, which was first conceived five years ago, used a body double along with hundreds of hours of Houston performances and extensive CGI synthesizing.

“We created the hologram the same way they did Carrie Fisher in the 'Star Wars' movie ‘Rogue One,'” said Marty Tudor, CEO of BASE Hologram, which has previously revived performing versions of dead singers including Roy Orbison and Maria Callas. “It's lengthy, it's tedious, it's a big, complicated process, but I think it worked.”

The ambitious performance is the modest brainchild of Whitney Houston herself, in at least one respect.

While on her final European tour, she had an “unplugged” section of her show, with a stripped down band and minimal fanfare. Houston liked that so much that shortly before her death at age 48 on the eve of the 2012 Grammy Awards, she expressed a desire to one day do an entire tour that way.

That concept became the model for the hologram concert.

“This is something that she wanted to do," Pat Houston said after the media preview of the show. "I get very emotional watching this, because it is so, so close to what she wanted. The only thing missing is her, physically.”

On first appearance it's clear how far holographic technology has come since previous iterations like Tupac's holographic stint with Snoop Dogg at Coachella in 2012, with little of the flickering unreality audiences expect. Houston's appearance in a gold gown looks magically realistic.

The limits are more apparent as the concert goes on, with the projection beam visible and Houston's movements minimal, but those shortcomings are unlikely to bother the hardcore fans the tour is likely to draw.

Houston was never one for elaborate choreography or flashy moves anyway, and her small gestures — a quivering jaw on long-held notes, fluttering fingers for vocal flourishes, are all captured here.

“Whitney didn't dance a lot, but when she did do her little moves, they were so perfectly Whitney," said Fatima Robinson, who choreographed the show. “We did lots of studying her behavior in her videos. We would study her movements, and find the best moments in some of the live videos that just really embody her.”

The show still features plenty of dancing, via four backup dancers and two moving backup singers, all of whom occasionally interact with the hologram.

But Houston mostly preferred to let her voice do the work, and that part of the show works seamlessly, through a blend of studio takes and live performances. Close listeners may think they're hearing the album version of a hit before it swerves into seemingly spontaneous moments that give it a live feeling.

The sound crew also found moments of between-song patter from Houston that were eternal enough to use for the new show.

“May God bless you and keep you, and let us pray for peace, and pray for the answer," she says toward the end of the set.

The production may be most effective when it embraces its holographic possibilities — including having Houston swarmed in a shimmering shower of golden sparks during the climactic performance of “I Will Always Love You.”

Dressing the Houston hologram provided its own set of problems and possibilities.

“The first thing is, you can't do black,” Timothy Snell, who oversaw the wardrobe for the show, said with a mock gasp. “And black and sparkles are your first go-to. But Whitney also loved color.”

Along with the gold gown, her outfits include a shimmering orange jumpsuit and a floor-length pink flowered coat.

“She liked to look sophisticated and timeless," Snell said. “And those timeless looks really show up here.”