A maternity hospital in Mariupol, southwest of the Ukrainian capital of Kyiv is the latest target of Russian aggression.

The House approved a massive spending bill Wednesday night that would rush $13.6 billion in U.S. aid to battered Ukraine and its European allies, after top Democrats were forced to abruptly drop their plan to include fresh funds to battle COVID-19.

Passage of the Ukraine aid and the $1.5 trillion government-wide legislation that carried it let both parties lay claim to election-year victories for their priorities. Democrats won treasured domestic initiatives, Republicans achieved defense boosts, and both got their imprint on funds to counter Russia’s brutal invasion of its western neighbor. Senate approval was assured by week’s end or perhaps slightly longer.

Hours earlier, House Speaker Nancy Pelosi, D-Calif., had to abandon the bill’s $15.6 billion for combating the pandemic, a decision she called "heartbreaking" and that spelled defeat for a top priority of President Joe Biden and party leaders. The money was mostly to bolster U.S. supplies of vaccines, treatments and tests and battle the disease around the world, but a Democratic revolt over Republican-demanded state aid cuts to cover the new initiatives’ costs forced her to scrap that spending.

"We’ve got a war going on in Ukraine," Pelosi told reporters, explaining the urgency Democrats felt in making concessions in bargaining with Republicans. "We have important work that we’re doing here." She said with her party in the 50-50 Senate needing at least 10 GOP votes to pass legislation, Democrats "are going to have to know there has to be compromise."

The House approved the overall bill in two separate votes. The measure’s security programs were overwhelmingly approved by 361-69, the rest by 260-171, with most Republicans opposed.

The Ukraine aid included $6.5 billion for the U.S. costs of sending troops and weapons to Eastern Europe and equipping allied forces there in response to Russian President Vladimir Putin’s invasion and repeated, bellicose threats. There was another $6.8 billion to care for refugees and provide economic aid to allies, and more to help federal agencies enforce economic sanctions against Russia and protect against cyber threats at home. 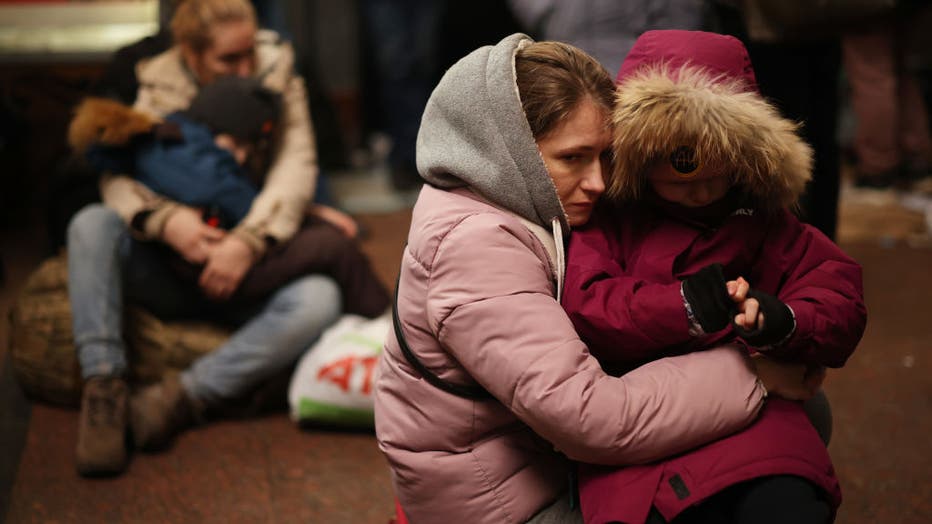 LVIV, UKRAINE - MARCH 03: Families wait to board a train to Poland on March 03, 2022 in Lviv, Ukraine. More than a million people have fled Ukraine following Russia's large-scale assault on the country, with hundreds of thousands of Ukrainians passin

Biden had requested $10 billion for the package.

Pelosi said she talked to Ukrainian President Volodymyr Zelenskyy for 45 minutes Wednesday. She said they discussed the weapons and other assistance his country needs and "the crimes against humanity that Putin is committing," including a Russian airstrike that destroyed a maternity hospital. "This is the beast that Putin is," Pelosi said.

While enmity toward Putin and a desire to send assistance to the region is virtually universal in Congress, lawmakers have had a hard time finding unity on other steps. In one area of agreement, the House also planned a vote on a bill banning Russian oil imports — Biden imposed such a ban this week — and levying other sanctions, underscoring lawmakers’ eagerness to demonstrate they’re taking action.

Rep. Tom Cole, R-Okla., called the $1.5 trillion measure a "reasonable compromise" and said its extra defense spending was "clearly necessary in the wake of Vladimir Putin’s unprovoked aggression against Ukraine."

In a remarkable and widespread rank-and-file rebellion, Democratic lawmakers froze the House into inactivity for most of Wednesday. Their demand: a refusal to accept Republicans’ insistence that the new COVID-19 spending be paid for with cuts in previously enacted pandemic aid to 30 states.

Pelosi eventually relented and decided to remove all pandemic spending from the government-wide, $1.5 trillion package. That underscored the pressure Congress feels to help Ukraine resist the Russian invasion before it’s too late and to help nearby nations bolster their militaries and absorb over 2 million refugees fleeing the fighting.

The House planned to vote next week on a separate measure providing the full $15.6 billion for pandemic programs, without cutting state aid. It was expected to pass but face an uphill fight in the Senate, where strong GOP opposition seemed fatal.

The $1.5 trillion measure and its 2,741 pages would keep agencies functioning through Sept. 30, the end of the fiscal year. Since it began Oct. 1, the government has functioned on short-term measures that prevented federal shutdowns but held programs to levels agreed to under President Donald Trump.

Democrats won a 6.7% increase over last year in domestic programs, to a total of $730 billion. Republicans were able to boost defense programs to $782 billion, a 5.6% increase.

Last spring, Biden proposed increases of 16% for domestic and just 2% for defense programs for this year. Neither was realistic because of Democrats’ tiny congressional majorities.

Since then, Russia’s pummeling of Ukraine made it impossible for Democrats to resist defense increases. And the relentless pandemic, families’ growing costs from inflation and collapse of Biden’s huge social and environment bill made it harder to stop Democrats’ domestic boosts.

The IRS would get an infusion to whittle down a big backlog of tax returns. There would be boosts for veterans’ medical care, biomedical research and processing migrants entering the U.S. at the southwestern border.

The measure retains strict decades-old curbs against using federal money for nearly all abortions. It has $300 million in military assistance for Ukraine and $300 million to help nearby countries like the Baltic nations and Poland. Service members would get 2.7% pay raises, and Navy shipbuilding would get a boost in a counter to China.

More money would be spent to prevent and respond to sexual assaults in the military. There was $1 million to change the names of bases and roads in installations named after Confederate leaders.

There was also language saying a plaque should be installed outside the Capitol listing all police officers who battled Trump supporters who attacked the building on Jan. 6, 2021.

Helping propel the bill to approval were thousands of hometown projects for both parties’ lawmakers. In the House alone, there were 2,021 such projects for Democrats worth $2.5 billion, and 706 worth $1.7 billion for Republicans, according to figures from that chamber. Totals for Senate projects were not immediately available.

These expenditures, once called earmarks but now dubbed community projects, were ubiquitous until Congress banned them in 2011 but revived in more limited form this year. This legislation includes money for an agricultural education program in Vermont, a water project in central California and money for the Ulysses S. Grant Presidential Library in Starkville, Mississippi.

As a backstop against delays in the Senate, the House by voice vote passed a bill keeping government agencies afloat through Tuesday. Agencies would have to start shutting down on Saturday if the Senate doesn’t complete the $1.5 trillion package.