The gunman who allegedly opened fire at an Independence Day parade in Highland Park Monday has been charged with seven counts of first-degree murder. Authorities anticipate to announce more charges in the days to come. Forty-five people were injured or killed in the attack, which was thought to have been planned by the alleged gunman for several weeks.

The family of Robert Crimo III, the suspected gunman in the Highland Park mass shooting in Illinois, have retained attorneys and released a statement Tuesday afternoon.

According to a series of tweets posted by Steve Greenberg, a criminal defense attorney at Greenberg Trial Lawyers, the family of Crimo has asked the law firm to represent them after reaching out on Monday.

"The parents of the accused Highland Park shooter have retained us to represent them," Greenberg tweeted.

"They wish that we share the following: ‘We are all mothers and fathers, sisters and brothers, and this is a terrible tragedy for many families, the victims, the paradegoers, the community and our own,’" the tweets continued. "‘Our hearts, thoughts, and prayers go out to everybody.’ The parents request that all respect their privacy as they try to sort thru this tragedy."

Attorneys Tom Durkin and Josh Herman have been chosen to represent the Crimo family, according to Greenberg.

Durkin told FOX 32 Chicago that he spoke to the family briefly by phone on Tuesday and would not comment further until after Crimo’s arraignment, which is scheduled for Wednesday.

Crimo is accused of opening fire on an Independence Day parade in suburban Chicago on Monday, killing seven people and wounding 30 others. Investigators said Crimo evaded initial capture by dressing as a woman and blending into the fleeing crowd. 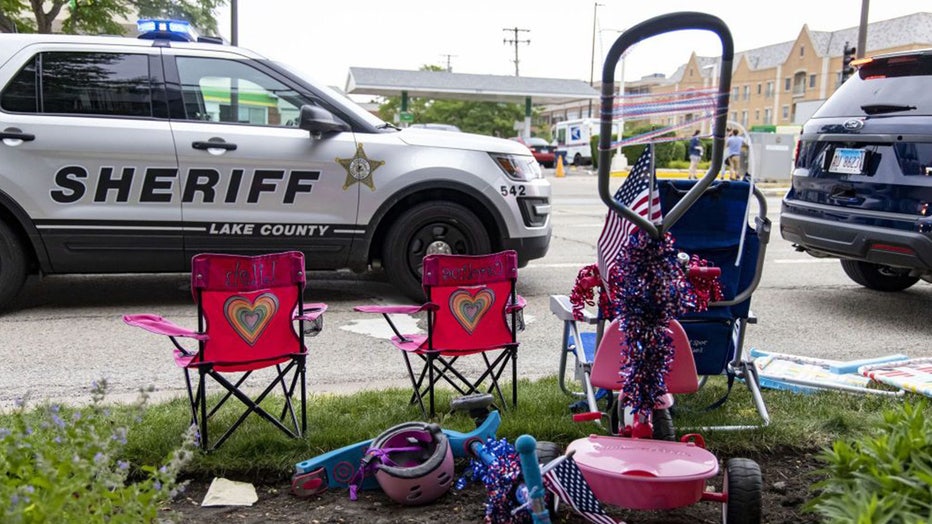 FILE - Chairs and scooters left behind at the scene of a mass shooting on the Fourth of July parade route Monday, July 4, 2022, in Highland Park. (Brian Cassella/Chicago Tribune/Tribune News Service via Getty Images)

A police officer pulled over Crimo about five miles north of the shooting scene, several hours after police released the man's photo and an image of his silver Honda Fit, officials said.

Investigators who have interrogated the suspect and reviewed his social media posts have not determined a motive for the attack or found any indication that he targeted anyone by race, religion or other protected status, Lake County Major Crime Task Force spokesman Christopher Covelli said.

On Tuesday, the Lake County Coroner's Office identified six of the seven victims who died in the attack as:

The seventh victim died at a hospital outside of Lake County.

Crimo has been charged with seven counts of first-degree murder. Authorities anticipate announcing more charges in the days to come.

Since the start of the year, the U.S. has seen 15 shootings where four or more people were killed, including the one in Highland Park, according to The Associated Press/USA TODAY/Northeastern University mass killing database.

Scores of smaller-scale shootings in nearby Chicago also left eight people dead and 60 others wounded over the Fourth of July weekend.

In 2013, Highland Park officials approved a ban on semi-automatic weapons and large-capacity ammunition magazines. A local doctor and the Illinois State Rifle Association quickly challenged the liberal suburb’s stance. The legal fight ended at the U.S. Supreme Court’s doorstep in 2015 when justices declined to hear the case and let the suburb’s restrictions remain in place.

The July 4 shooting was just the latest to shatter the rituals of American life. Schools, churches, grocery stores and now community parades have all become killing grounds in recent months.

"It is devastating that a celebration of America was ripped apart by our uniquely American plague," Illinois Gov. J.B. Pritzker said at a news conference. "I’m furious because it does not have to be this way... while we celebrate the Fourth of July just once a year, mass shootings have become a weekly — yes, weekly — American tradition."

The Associated Press and FOX 32 Chicago contributed to this report. This story was reported out of Los Angeles.