New Hampshire Attorney General John Formella said at a news conference on Aug. 11, 2022, that the case of missing New Hampshire girl, Harmony Montgomery, is now being treated as a homicide.

MANCHESTER, N.H. - The search for Harmony Montgomery, a New Hampshire girl who vanished in 2019 at age 5 but was not reported missing until late 2021, has now shifted to a homicide investigation, authorities said.

Investigators have concluded that Montgomery was murdered in the city of Manchester in early December 2019, New Hampshire Attorney General John Formella said Thursday at a news conference.

Montgomery’s remains have not been located, but authorities said biological evidence led them to "this difficult and tragic conclusion."

In June, investigators searched an apartment building in the city of Manchester, where Montgomery’s father and stepmother once lived. They removed a refrigerator and other items, but additional details were not released. 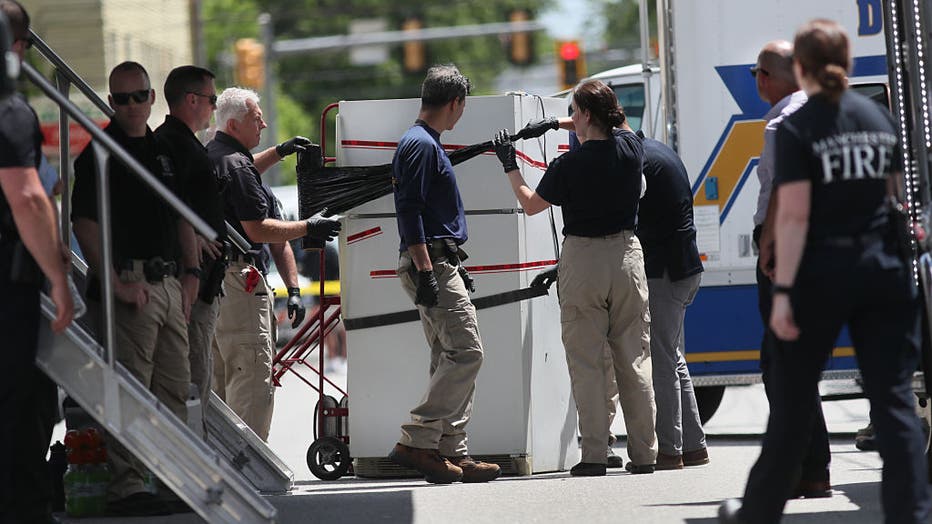 A refrigerator was taken out of an apartment on Union Street, and wrapped up and then placed on a truck in Manchester, NH on June 14, 2022. (Photo by Suzanne Kreiter/The Boston Globe via Getty Images)

Police first became aware that Harmony might be missing when they received a call from the girl’s mother, Crystal Sorey, in November. She had been unsuccessfully trying to locate the girl for months, police said.

Police said they contacted Harmony’s father, Adam Montgomery, and other family members by the end of December. According to court documents, police told him that Harmony had not been seen in more than two years and there was concern over whether she was still alive.

Harmony’s father and stepmother, who have since pleaded not guilty to charges related to her well-being, told police that Adam brought Harmony to be with her mother in Massachusetts around Thanksgiving 2019. Her mother said she last saw her daughter during a phone video conversation at around Easter that year.

Previously, police had said they believed that Harmony had disappeared between Nov. 28 and Dec. 10, 2019.

Manchester Police Chief Allen Aldenberg said the police department would do "everything within the limits of the law" to bring those responsible for her murder to justice. Authorities created a tip line for people to share any information regarding her death at 603-203-6060.

"Harmony is a sweet and innocent child who deserves to be brought back to her family and friends," the chief added, appearing to choke back emotion.

Harmony Montgomery, who is believed to have been murdered in early December 2019, was not reported missing until late 2021, according to police.

Montgomery's father, 31-year-old Adam Montgomery, reportedly had sole custody of the girl since February 2019. Adam Montgomery was indicted in March on an assault charge alleging that he struck Harmony in the face in July 2019. He pleaded not guilty and has been in jail since January.

Harmony Montgomery, 7, was reported missing at the end of last year, though it’s believed she hasn’t been seen since 2019 in New Hampshire at the age of 5.

Authorities in New Hampshire said they first became aware of the case when they received a call from Sorey, the girl’s biological mother who lives in Massachusetts, in November 2021. Sorey said she had been trying to locate her daughter for months but had been blocked by her ex-husband from contacting the girl.

Sorey had to surrender Harmony to the state in the summer of 2018. After that, Adam Montgomery secured sole custody in February 2019 and moved her to New Hampshire, FOX News reported.

Authorities determined Harmony was last seen by police at a home in Manchester in October 2019. Police responded to a service call there and had no reason to return to the address afterward.

Sorey originally told officers in November 2021 that she hadn’t seen her daughter in over six months. She then clarified that it had actually been since Easter 2019, when she video chatted with the father and Harmony, according to a police affidavit.

In December 2021, police made contact with Adam Montgomery and other family members to speak about Harmony. An affidavit said police told the father that Harmony "had not been physically observed in over two years and that we had concern for whether or not she was still alive."

In early January 2022, both Adam Montgomery and Kayla Montgomery were arrested, separately, on charges related to her well-being.

Adam was arrested on Jan. 4, on charges that included second-degree assault stemming from conduct against Harmony in 2019, as well as charges of interfering with custody and child endangerment. Police accused him of "purposely violating a duty of care, protection or support" by failing to know where she has been since late 2019 — the last reported sighting of Harmony.

FOX News reported the 2019 conduct against Harmony involved Adam Montgomery allegedly punching his daughter, who is visually impaired and blind in one eye, in the face, leaving her with a black eye.

In a December 2021 interview with police, Harmony's great uncle told officers he saw her with a black eye in July 2019. He said Montgomery told him Adam Montgomery hit her after he had seen Harmony holding her hand over her younger brother’s mouth to stop him from crying, according to the police documents.

"I know that over the past eight months, there have been many discussions, speculation, and questions relative to where the system failed Harmony, and I myself continue to share the same concerns and still have many remaining questions," Aldenberg said during Thursday’s press conference.

"However, the homicide of this little girl rests with the person or persons who committed this horrific act," he added.

This story was reported from Cincinnati. Megan Ziegler and the Associated Press contributed.