Damage was reported on the ground by the National Weather Service as the storm moved west of the Arabi area, moving northeast into the city’s east. Photo credit: Drew & Matthew Burke via Twitter.

NEW ORLEANS - The tornado that ripped through a New Orleans suburb lifted one house into the air and dropped it onto the middle of a street with a family of three inside.

Neighbors said the parents of a girl climbed out of the wreckage screaming frantically for help. Their daughter was on a breathing machine, and now was stuck inside.

Chuck Heirsch told The Times-Picayune / New Orleans Advocate that he called 911 as he saw his neighbor on Prosperity Street trying to reach his daughter. 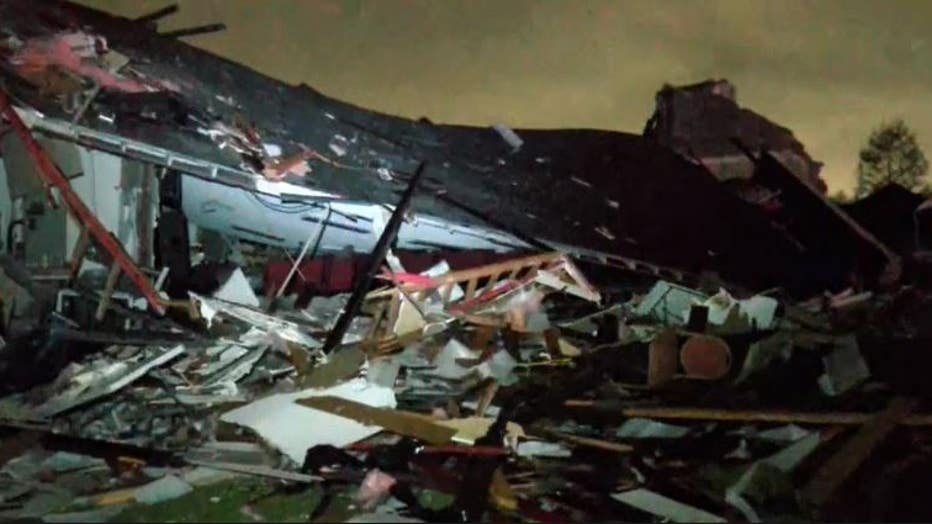 Damage pictured from a tornado on March 22, 2021, near New Orleans, Louisiana. (Credit: WVUE-TV)

"They were screaming. His wife was hysterical. They were already traumatized from taking that ‘Wizard of Oz’ ride," Heirsch said.

"All the men in the neighborhood ran to the house. The mother, they brought her to me. I just held her," Nerissa Ledet told the newspaper. "I tried to console her. I said, ‘You know they’re going to get her out.’"

Firefighters quickly arrived and carried her out in a blanket. St. Bernard Parish President Guy McInnis described the rescue, saying she's in a hospital and "doing fine."