The D.C. government today released the number of positive coronavirus cases broken down by Ward and it shows no hotspots in the city. The most cases were in and around Capitol Hill with the fewest east of the river in Ward 8. This as we’re also hearing of more frustrations for people applying for unemployment in D.C.

WASHINGTON (FOX 5 DC) - The D.C. government on Wednesday released data on positive coronavirus tests that show no part of the city has been spared but there are no trouble spots. In other words, there are no sections of the city where the number of positive tests were so high to alarm epidemiologists.

In fact, the mayor said residents should make their own conclusions from the numbers that have been released.

The least number of positive tests were east of the Anacostia River in Ward 8 where only 44 people have tested positive.

So far, 11 people in the District have died from the coronavirus. The latest victim, a woman in her 70s, who had not been previously tested, died at home.

City officials say four of the 11 people who have died from the virus passed away either at home or "in the community" and had not previously sought medical care. 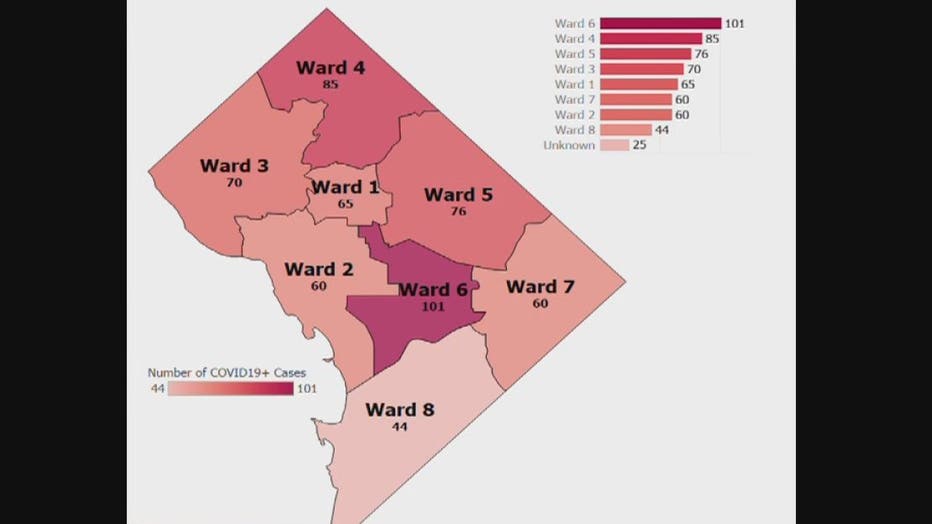 CORONAVIRUS BY THE NUMBERS: DC, Maryland and Virginia coronavirus case totals climb over 4,000

Mayor Muriel Bowser was also asked again Wednesday about the DC Office of Employment Services and the status of unemployment checks.

There have so far been nearly 40,000 claims for unemployment and a number of complaints about payments.

"The Department of Employment Services is very critical and it is one of the agencies that has just been crushed with calls and service", said Bowser at a news conference Wednesday. "We will have a more full report out from our DOES (Department of Employment Services) Director to talk about it one day this week on what people can expect in terms of when payments will start".

Laid-off workers filing claims have griped about a quirky website that can only be accessed by a laptop or desktop computer and long waits on the phone. The mayor acknowledged the office had been "slammed" and a large number of city workers had been calling out sick.

Greg Lloyd, the executive chef at Le Diplomate in Northwest, says only two of the 19 people laid off with him have received any money from unemployment and the funds they received were for the second week of the claim. Lloyd says the two received nothing for the first week of the claim which the District government had said it would waive. Typically there is a one week wait in the District before any unemployment checks are issued.

"No one knows when they are going to be paid," said Lloyd. "We are hearing soon, one report is 30 days, another report is its coming, no one knows, we all need to know."

Le Diplomate is not open for carryout and has shut down until the city says the restaurant can reopen.

There have been so many claims for unemployment the D.C. government had to contract with an outside firm to assist in handling them all.