Her mother is still mystified by how the youngster got so messy in the first place.

EAST RENFREWSHIRE, Scotland - We’ve all been there, Lucie.

The photo of an adorably frazzled 5-year-old girl on her first day back to school has gone massively viral on Facebook, though her mother is still mystified by how the youngster got so messy in the first place.

Earlier this week, Jillian Falconer of East Renfrewshire, Scotland, picked up her daughter Lucie from her first day of a new academic year and could barely believe the state she was in, Barrhead News reports.

In a hilarious side-by-side image shared to social media, little Lucie looked pristine in a “before” photo, proudly sporting her school uniform of a black sweater and skirt paired with a white oxford shirt, striped tie and matching hair bow, plus black knee socks and patent-leather Mary Janes.

The "after" was a different story.

All those hours in the classroom evidently took a toll on the primary school pupil, with Falconer describing her reaction as “mortified” when she picked her daughter up at the end of the day.

As evidenced in the relatable picture Falconer snapped, the little girl looked exhausted with her hair bow askew, her sweater and unicorn backpack falling off her shoulder, her skirt off-kilter, and a knee sock rolling down her leg.

“Lucie is just like any typical child. When I went to pick her up from school and saw how she looked, I was mortified,” Falconer told Barrhead News. "I asked her what she had been doing at school and she said ‘Oh nothing, I just played with my friends.’”

Amused, the mother of four submitted the funny photos to the outlet’s “Back to School” campaign on Facebook – where they have since won thunderous praise from those both within and beyond the local community. 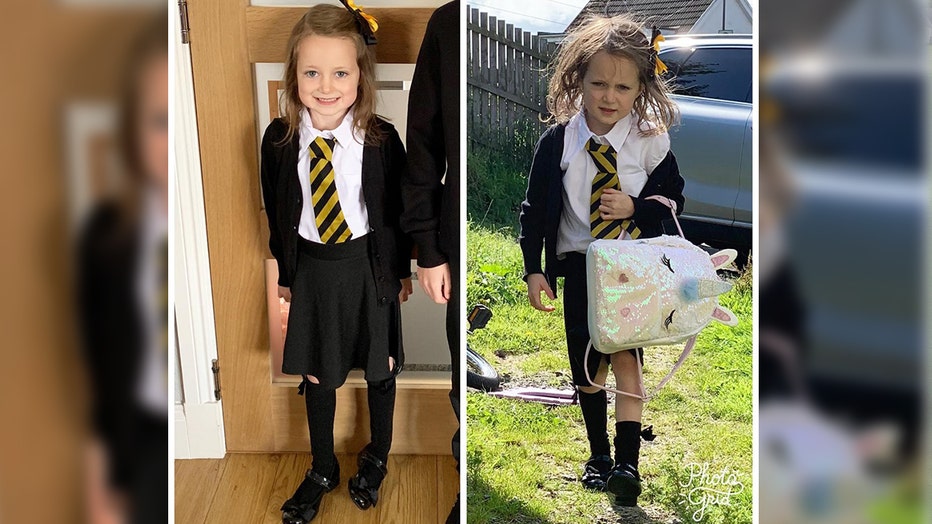 One adorably frazzled picture taken after a five-year-old girl’s first day back at school has gone massively viral on Facebook, though her mother is still mystified as to how the youngster got so messy in the first place. (Courtesy of Barrhead News)

“That’s what I look like when I get home from school, and I’m the teacher!” one user quipped.

“Fantastic, this picture should be used for shops advertising back to school clothes and how durable they are,” another agreed.

Others joked it looked like the little girl had weathered a wild night on the town, while many parents agreed that their own children frequently returned home from school looking a whole lot worse for the wear than when they departed.

“If they're messy, dirty, clothes disheveled it usually means they've had great fun,” one wise user wrote. “I’ll’ take that over an immaculate child any day!”

As for Lucie’s own family, they’re still reeling from the news that her story has gone so far and wide.

“We can’t believe it has gone viral,” her mom told Barrhead News. “Her dad had messaged me from work, asking how her first day went, and I said to him, ‘You won’t believe the state she’s in.’”

Falconer described Lucie, the youngest of her four children, as her “wee madam," explaining that the little girl likely tuckered herself out during the school day fueled by the excitement of being reunited with her friends, according to Metro.

Get updates on this story at Foxnews.com.