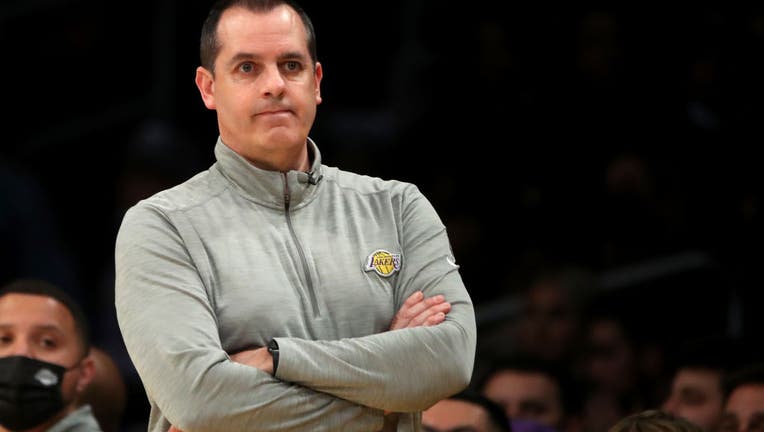 LOS ANGELES - After three seasons that included winning an NBA championship, Frank Vogel was fired as the head coach of the Los Angeles Lakers Monday.

"I have a tremendous amount of respect for Frank both on and off the court," said Rob Pelinka, the Lakers Vice President of Basketball Operations and General Manager in a statement. "Frank is a great coach and a good man. We will forever be grateful to him for his work in guiding us to the 2019-20 NBA championship. This is an incredibly difficult decision to make, but one we feel is necessary at this point. All of us here wish Frank and his wonderful family all the best for the future."

"Frank Vogel has coached his final game for the Lakers," ESPN's Adrian Wojnarowski tweeted Sunday night, adding that the decision is expected to be shared with Vogel directly the next day.

However, Vogel apparently became informed of his fate with the franchise before the Lakers post-game press conference, after beating Denver 146-141 in their final game of the season.

Vogel was hired as the Lakers head coach ahead of the 2019-2020 season. In the unprecedented season that included the death of Lakers icon Kobe Bryant, a social justice movement, and a temporary shutdown of all professional sports amid the coronavirus pandemic, the Lakers won the 2020 NBA Championship in the NBA Bubble.

Since then, the Lakers, one of the most successful franchises in sports history, have failed to meet expectations.

The following season, the Lakers were able to beat out Golden State in the play-in tournament for a spot in the playoffs. However, they were a first-round exit against Phoenix in a six-game series.

For the 2021-22 season, the Lakers were early favorites to make it to the NBA Finals and possibly win the franchise’s 18th title with a roster that included several NBA veterans. In addition to what was dubbed a Big Three of LeBron James, Anthony Davis, and Russell Westbrook, the lineup also included Dwight Howard, Carmelo Anthony, and Rajon Rondo. The experience came with age, and it simply did not work. Rondo was traded to Cleveland, the team was plagued by injuries, and the overall chemistry remained questionable.

The Lakers were eliminated from playoff contention last week and finished the season in 11th place in the Western Conference. To add insult to injury, the Lakers lost all four games against the Clippers this season. Ty Lue, who was a candidate for the Lakers gig before the front office went with Vogel, has led the Clippers to a spot in the play-in tournament as the No. 8 seed. Lue was able to do this without two-time NBA Finals MVP Kawhi Leonard for the entire season and without superstar Paul George for most of the season.

"This man is a champion. He deserves to be a head coach in the NBA. This is not an indictment against his skills as a coach. The situation that he was in was so reprehensible, he didn’t need to be there any longer," ESPN’s Stephen A. Smith said on "First Take" Monday. "The Lakers require something a little bit different."

Vogel has a reputation for his strong defensive strategies, but the Lakers struggled defensively throughout the season, and were ranked 23rd in the league in the team defense category.

"It’s not all on Frank Vogel. We know he’s going to get fired. We know that," Johnson said.

While a search is underway for a new head coach, it may be difficult for the front office to make major changes to its roster.

"They’re coming back with the same team. Not the same nine role players but the Core 3 [James, Davis, Westbrook] is probably going to have to come back," Johnson said.

Vogel previously coached for the Indiana Pacers and Orlando Magic, with an overall head coaching record of 398-340.

The Lakers have not announced who will be the next head coach or potential front-runners.