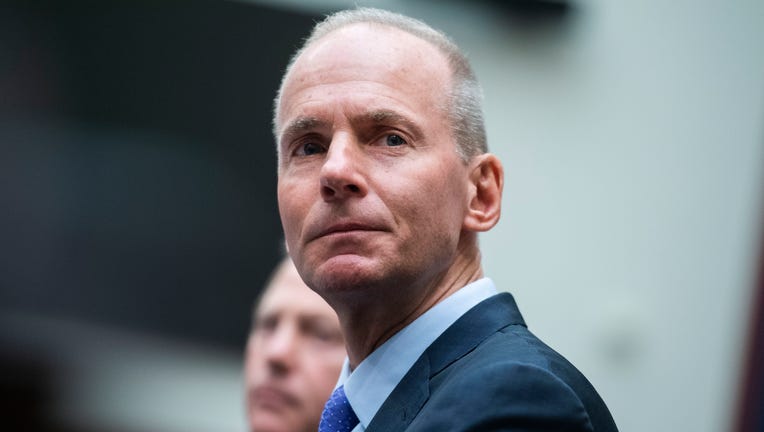 Former Boeing CEO Dennis Muilenburg addresses the families of victims who died in Boeing 737 Max jet crashes, during the House Transportation and Infrastructure Committee hearing examining the design, development, and marketing of the aircraft, in Ra

The Boeing CEO who was ousted last month for the company’s botched response to two crashes and the grounding of its best-selling plane will walk away with $62.2 million, the company disclosed Friday.

Boeing said, however, that Dennis Muilenburg will not get additional severance or a 2019 bonus, and will forfeit stock awards worth $14.6 million.

Muilenburg, who spent more than 30 years at Boeing, also has unexercised stock options that he has held since 2013 and that are worth more than $18.5 million at Friday's closing price.

Muilenburg was fired in late December after failing to get the company’s 737 Max jetliner back in the air.

Boeing board Chairman David Calhoun will take over as CEO on Monday. He is a former General Electric and Nielsen executive with a reputation as a turnaround specialist.

Calhoun, 62, will get a base salary of $1.4 million but potentially several million more in bonuses and stock awards, including $7 million if he gets the Max back in service.

The Max was grounded last March after crashes in Indonesia and Ethiopia killed 346 people. It has taken far longer than Boeing expected to fix the plane. This month, Boeing will halt production until it is clear when changes to the plane will be approved by regulators.

Muilenberg was named CEO in 2015 and presided over a rapid rise in the Chicago-based company's stock price. The shares have dropped 26% in the last 10 months, however, as the Max's recovery stalled.

Months before Muilenburg's ouster, some lawmakers and relatives of passengers who died in the Max crashes had asked him to resign or take a cut in pay.

At a congressional hearing in October, Muilenburg parried questions about his compensation by saying it was set by Boeing's board. A few days later, he announced he would not take a bonus for 2019 — that he would walk away from “tens of millions” of dollars as a signal that he was taking responsibility for correcting problems with the Max.