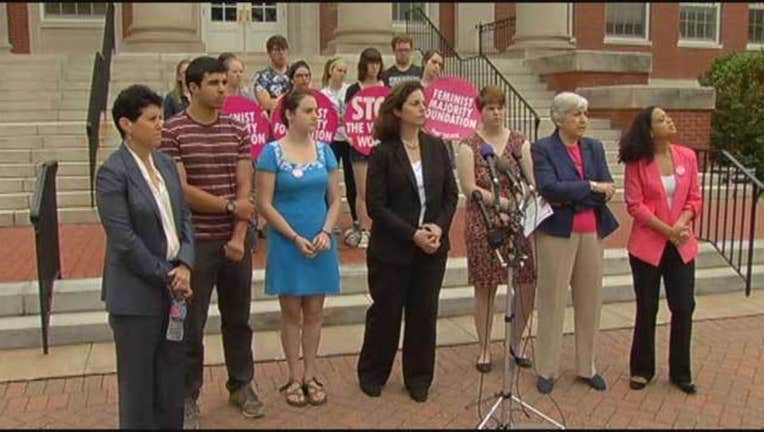 FREDERICKSBURG, Va. (AP) — A feminist group on the campus of the University of Mary Washington accuses the school of failing to act on sexual and violent cyberthreats made against its members, according to a complaint filed Thursday.

Feminists United said members received hundreds of anonymous, profane messages and death threats for their public opposition to Greek life and in speaking out against an offensive chant by the rugby team.

The group filed its complaint with the U.S. Department of Education, saying the state university failed to protect the women from "a sexually hostile school environment."

In a statement, Mary Washington denied the allegations.

"To the university's knowledge, no known reports of direct threats of violence and/or sexual assault have gone unheeded," the statement said.

Feminists United were working on the complaint before the April 17 slaying of board member Grace Rebecca Mann, 20, of McLean. Her roommate, Steven Vander Briel, has been charged with first-degree murder and abduction.

Police have not revealed a possible motive. Mann was strangled.

Many of the threats against the group were on Yik Yak, a smartphone app that allows users to post and read messages anonymously in real time.

The social media company did not immediately respond to an Associated Press request for comment. On its website, however, the company states, "DON'T POST A THREAT. We take threats to safety very seriously and cooperate with local authorities if there's a post that poses a threat to people."

Lisa J. Banks, one of the attorneys filing the complaint, said the Mary Washington case is different from many Title IX complaints because it takes aim at cyberthreats rather than sexual assault.

"It deals with the cyberbullying, the cyberassault aspects of what was occurring on campus, which I think with the advent of new technologies is becoming increasingly common around campuses as another way to harass and assault individuals," Banks said.

The students took their complaints to the Mary Washington's administration, suggesting that Yik Yak not be accessible through the campus server, she said. They declined, citing free speech concerns, she said.

Members of Feminists United said hundreds of threatening messages, some targeting women by name, left them fearful and anxious.

"There was no way of telling if these people were serious, if they had a history of violence," said Michels, a rising senior from Fairfax. "I didn't know if they were living across the hall or sitting next to me in class."

Feminists United traces the start of a torrent of threats to a forum last fall at which members linked Greek life to sexual assault.

Then in January, a recording of the rugby team singing a sexually violent song at a party surfaced.

In response, the university suspended rugby team activities. Team members were ordered to participate in sensitivity training and education sessions.

Contacted about the Feminists United filing, a spokeswoman for the Education Department said it does not confirm complaints.

A year ago, the department released the names of the 55 colleges and universities currently facing a Title IX investigation over their handling of sexual abuse complaints.

The department can withhold federal funding from a school that doesn't comply with the law, but it so far has not used that power and instead has negotiated voluntary resolutions for violators.