Dr. Anthony Fauci received the first dose of the Moderna COVID-19 vaccine on Dec. 22, stating he hopes it serves as a symbol to Americans about the shot's safety and efficacy.

There is concern among the United States’ top scientists and health officials that a new, more contagious COVID-19 strain first identified in the United Kingdom may have already reached the U.S.

The CDC said it appears the new strain is more "rapidly transmissible" than the other known circulating strains of COVID-19. Britain first alerted the World Health Organization about the mutation, saying it accounted for some 60% of London’s new cases. 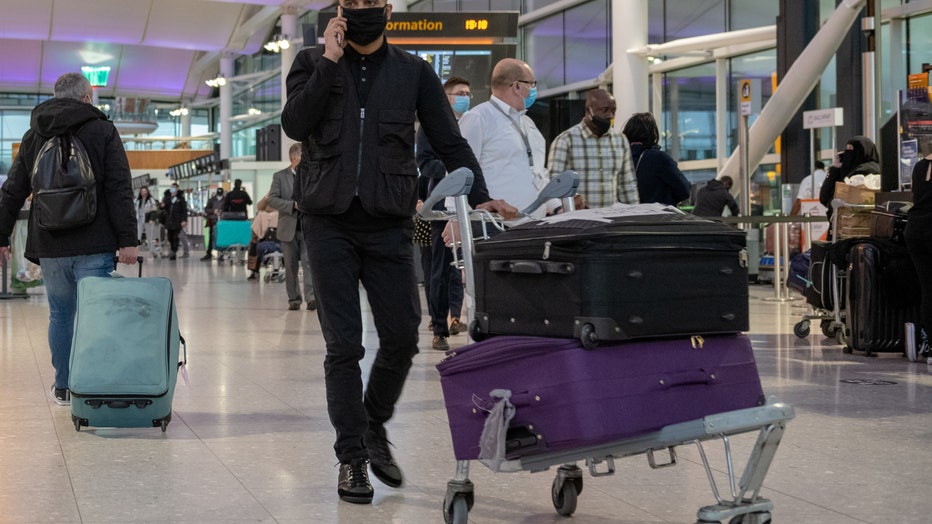 Passengers heading to the departure gates at Heathrow's Terminal 2 on December 22, 2020 in London, England. London and the South East have entered a 'Tier 4' lockdown as a new coronavirus strain is detected in the lead up to Christmas. (Photo by Jose

The U.S. is also keeping watch, with some health officials believing it may be too late to stop the mutated strain of the coronavirus from crossing the Atlantic.

"When you see something that is pretty prevalent in a place like the U.K. — there are also mutations that we’re seeing in South Africa — and given the travel throughout the world, I would not be surprised if it is already here," Dr. Anthony Fauci, the country’s top infectious disease expert, told PBS.

"Ongoing travel between the United Kingdom and the United States, as well as the high prevalence of this variant among current UK infections, increase the likelihood of importation," the CDC said in a statement. "Given the small fraction of US infections that have been sequenced, the variant could already be in the United States without having been detected."

But the CDC said it has no evidence that the new strain of the virus that causes COVID-19 is any more serious or deadly than the other known strains that have infected nearly 78 million people and killed 1.7 million worldwide.

"Scientists are working to learn more about this [new] variant to better understand how easily it might be transmitted and whether currently authorized vaccines will protect people against it," the CDC said.

RELATED: Should the U.S. be concerned about a new strain of COVID-19?

Vaccine maker Pfizer-BioNTech told FOX Television Stations that its researchers are currently testing its vaccine, which was the first authorized for emergency use by the FDA, against the new strain of COVID-19. Researchers said they expected new strains of the virus and took that into account when developing the vaccine that’s now being distributed in the U.S.

"We don't know at the moment if our vaccine is also able to provide protection against this new variant," BionNTech's CEO Ugur Sahin said in a news conference the day after the vaccine was approved for use in the European Union. "But scientifically, it is highly likely that the immune response by this vaccine also can deal with the new virus variants."

"Genetic mutations occur frequently during virus spread," a representative for the company wrote in an e-mail. "Since the emergence of the new coronavirus, SARS-CoV-2 in late 2019, experts have closely monitored and determined that there is more than one strain."

Some European countries and parts of the U.S. have already limited travel from the U.K. out of concern over spread of the new strain. From Canada to India, one nation after another banned flights from Britain, while France barred the entry of trucks from Britain for 48 hours while the strain is assessed.

In the U.S., Washington Gov. Jay Inslee announced new travel restrictions for people arriving from the United Kingdom and South Africa, where the seemingly more contagious strain of the coronavirus is also circulating.

Inslee issued a proclamation requiring passengers who arrive from the U.K. and South Africa to quarantine for 14 days, including passengers who have visited those countries in the past few days. It also encourages those people to get tested for the virus.

British Airways canceled the only nonstop flight from London to Seattle on Monday, according to Seattle-Tacoma International Airport spokesperson Perry Cooper, but he said the reason behind it wasn’t immediately known.

Starting Thursday, COVID-19 testing will be required up to 72 hours prior to departure for all passengers of Delta and its partner Virgin Atlantic traveling from the U.K. to New York or Atlanta, a Delta spokeswoman said Monday.

Viruses mutate regularly, and scientists have found thousands different of mutations among samples of the virus causing COVID-19. But many of these changes have no effect on how easily the virus spreads or how severe symptoms are.