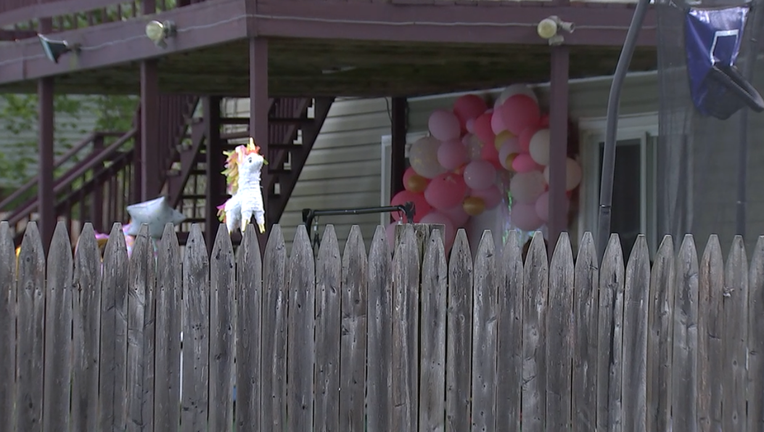 A father and 7-year-old daughter are dead after drowning in Waldorf. (FOX 5 DC / Stephanie Ramirez)

WALDORF, Md. - The Charles County Sheriff’s Office released the name of a father who law enforcement said jumped into a pool to rescue his 7-year-old daughter at a birthday party in Waldorf on Saturday.

Neither of the two knew how to swim, according to a Sheriff’s Office spokesperson. The two were pronounced dead at the University of Maryland Charles Regional Medical Center later that day.

A teenager who tried to help the father and daughter is said to be in critical condition at Children’s National Hospital in Washington D.C.

Two firefighters were also injured in the Charles County pool rescue. Both firefighters reportedly took in water during the rescue and have since been released.

Charles County investigators identified the father on Sunday as Haffis Olanrewaju Agboola of Hyattsville, MD. They did not yet release the name of the seven-year-old victim.

It was around 6 p.m. Saturday when Charles County firefighters tell FOX 5 they arrived to find three people at the bottom of a pool. A source says the victims were found in the deep end of the pool.

The pool is located in the backyard of a home at the 2100 block of Johnson Lane in Waldorf.

The Sheriff’s Office said a 17-year-old tried to help the struggling seven-year-old and her 44-year-old father. All three took in too much water.

Sunday morning, from across the street,  you could still see pink and unicorn balloons in the backyard with floats still moving around in the pool.

Pinckney told FOX 5 he had just left the house – but his family was home at the time of the drowning.

Alicia Pinckney’s 14-year-old son told FOX 5 DC someone ran to their door around the time of the drowning, frantically asking if someone in the home knew how to swim. The 14-year-old said he did not fully understand the person at the time.

"I don’t know, it’s just on my goodness, it’s just tragic, I mean right across the street from me," said Alicia Pinckney, who told FOX 5 she and another neighbor where trying to help console the mother of the seven-year-old once first responders arrived.

Pinckney did not learn until Sunday that the woman she was holding had lost both a husband and daughter.

Larry Pinckney offered his condolences and frustrated told FOX 5, "You’ve got to have a life guard or at least have two or three people who know how to swim and stuff like that and you have to watch - they have to watch these kids.

A man who answered the Jefferson Lane home declined to speak with FOX 5, citing the Sheriff’s Office investigation.