Fairfax County Police have announced an $11,000 reward for any information that leads to the arrest of a murder suspect wanted for an October 2022 killing.

FAIRFAX COUNTY, Va. (FOX 5 DC) - A man charged with murder in Mount Vernon remains at large, earning the title of "Fairfax County's Most Wanted" and prompting police to offer an $11,000 reward for any information that leads to his arrest.

Fairfax County Chief of Police Kevin Davis announced the reward for information that leads to the arrest of Kyjuan Omar Braxton Trott-McLean who has been charged with the murder of Brandon Wims in October of this year.

Officers were called to the 5800 block of St Gregorys Lane in Mount Vernon around 7 a.m. on Oct. 2 for a report of gunshots.

While officers were responding, Wims, 31, of Maryland was dropped off at Mount Vernon Hospital suffering from gunshot wounds to the upper body. Wims was later transported to Fairfax Hospital, where he was pronounced deceased. 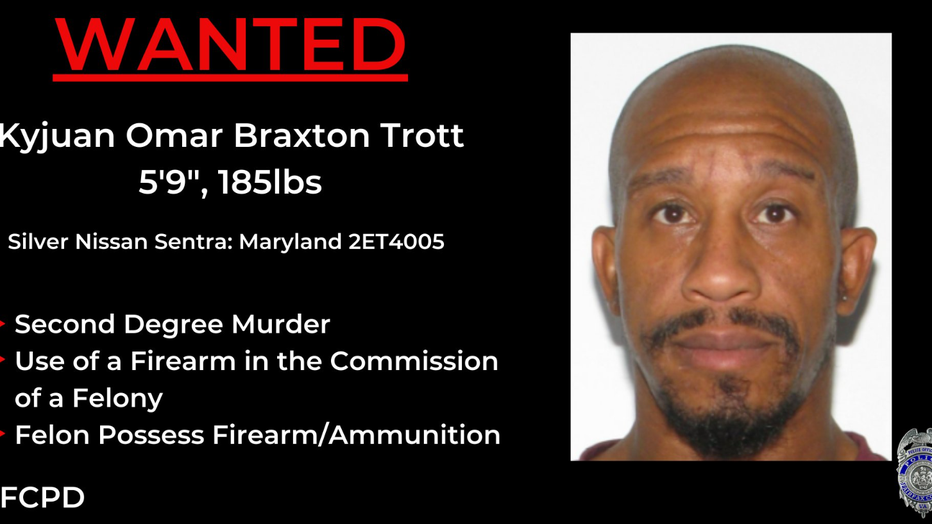 Detectives obtained warrants for Trott-McLean for second-degree murder among other charges and he has been wanted ever since. Police say they have gotten close to capturing him, but he continues to evade police.

Fairfax County Police say they've partnered with the Bureau of Alcohol, Tobacco, Firearms, and Explosives which contributed $5,000 towards the reward.

Detectives are asking anyone with information on Trott-Mclean’s whereabouts to call 703-246-7800. If you see Trott, please call 911 immediately.