The months-long event showcases the world’s greatest innovations, including the latest technology, and serves as an opportunity for nations to meet, change ideas, promote culture and build business ties.

While the pandemic delay could have an impact on how many people flock to the United Arab Emirates, the six-month-long exhibition offers Dubai a momentous opportunity to showcase its unique East-meets-West appeal as a place where all are welcome for business.

Dubai, which first won the bid to host the exhibition in 2013, has spent the past several years preparing for the occasion with a futuristic landscape, a new metro station, multi-million dollar pavilions and so-called districts with names like "sustainability" and "opportunity" — all built, like much of the Gulf, by low-paid migrant workers.

Organizers say 192 nations are represented at the expo. The U.S. pavilion will showcase a replica of the Space X Falcon 9 rocket. Italy's pavilion houses a 3-D replica of Michelangelo’s biblical hero, David, that is 17 feet high. Other attractions include an African food hall, a royal Egyptian mummy, concerts and performances from around the world, and the option to dine on a $500 three-course meal with glow-in-the-dark cuisine.

The first World Expo was held in 1851 in London’s iconic Crystal Palace to showcase the inventions of the Industrial Revolution. For more than a century, these global exhibitions have captured the imagination and showcased some of humanity’s most important innovations.

The first World Fair held in the United States in 1876 debuted Alexander Graham Bell’s telephone, the typewriter, a mechanical calculator and Heinz Ketchup. Held in Philadelphia, Pennsylvania, that fair attracted nearly 10 million people at a time when the entire U.S. population was estimated to be just 40 million. One of its main buildings, Memorial Hall, is now a museum. 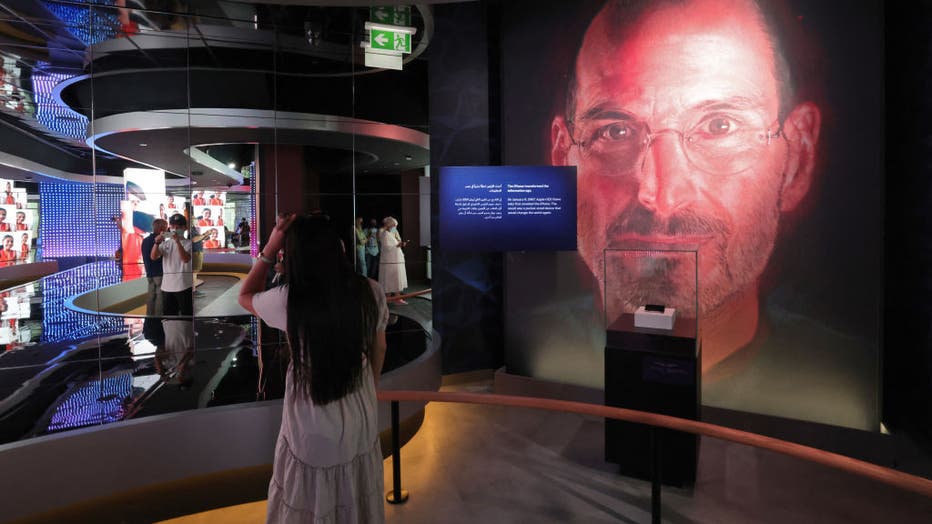 A picture shows an image of Apple founder and late CEO Steve Jobs in the interior of the U.S. pavilion at the Dubai Expo 2020, on Oct. 1, 2021. Expo 2020 opened in Dubai, hoping to attract millions of visitors with its imaginative pavilions and techn

Other fairs showcased inventions like the sewing machine, the elevator, carbonated soda, the Ferris wheel and, in 1939 in New York, the television. People journeyed far for the chance at a glimpse of the world in ways they couldn’t otherwise access.

This year's expo is happening amid a global pandemic when untold numbers are still working and studying remotely — and connecting to the world virtually. It's unclear how many visitors Dubai can attract, and how much the expo will stimulate its tourism-driven economy.

While most fairs have been held in Europe and the United States, none have been hosted in the Middle East until now.

To enter the expo site, visitors will need to show a negative PCR test or proof of COVID-19 vaccination.

Dubai's ruler and the force behind the emirate's transformation, Sheikh Mohammed bin Rashid Al Maktoum, says Expo 2020 is a chance to showcase the best of human excellence.

"It offers a platform to forge a united worldwide effort to build a more sustainable and prosperous future for all of mankind," he told guests at the expo's opening ceremony Thursday night.

Sheikh Mohamed bin Zayed Al Nahyan, crown prince and de-facto ruler of the UAE’s seat of power, Abu Dhabi, used his speech to emphasize "the ethos of this land" as a meeting point for cultures and tolerance.

Whether Iran or Israel, every nation is welcome at Dubai's expo.

Human Rights Watch, however, says organizers are promoting an inaccurate image of the UAE as an "open and tolerant country" for public relations purposes. Instead, it said in a scathing report that "abusive authorities forcefully bar all peaceful criticism and dissent" in the country, jailing activists and carrying out pervasive domestic surveillance programs.

"The UAE has embarked on a decades-long effort to whitewash its reputation on the international stage," the rights group said.

The expo site will attempt to dazzle visitors with a centerpiece dome, marketed as the world’s largest 360-degree projection screen. Its construction required 8.5 miles of steel.

Some World Fair structures remain iconic markers of the human journey and our industrial evolution. None more so than the Eiffel Tower, which was constructed in Paris, not only to be the tallest structure in the world at the time but to serve as the entrance to the 1889 World Fair. The Eiffel Tower was not immediately popular and some even campaigned for its dismantling after the exhibition closed.

The Space Needle in Seattle, Washington, built for the 1962 World Fair, is another structure with continued prominence and allure.

The Atomium in Brussels, Belgium, was built for the 1958 World Fair and featured the world’s fastest elevators at the time.