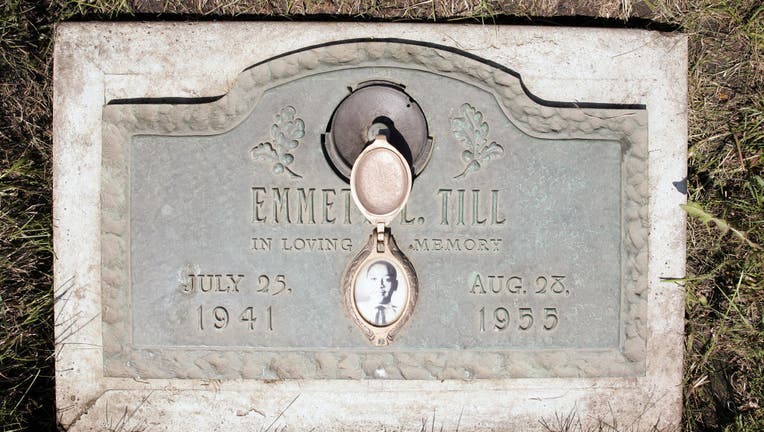 A plaque marks the gravesite of Emmett Till at Burr Oak Cemetery May 4, 2005 in Aslip, Illinois. (Photo by Scott Olson/Getty Images)

On Aug. 28, 1955, Emmett Till, a Black teen from Chicago, was abducted from his uncle’s home in Money, Mississippi, by two White men after he had supposedly whistled at a White woman. He was found brutally slain three days later.

The 14-year-old’s killing galvanized the civil rights movement after Till’s mother insisted on an open casket, and Jet magazine published photos of his brutalized body.

Young Emmett Till wears a hat. (via Getty Images)

Stories about the events that led to Till’s killing have varied through the years, but the woman known at the time as Carolyn Bryant was always at the center of it, having made the accusation Till made improper advances.

Now known as Carolyn Bryant Donham, Donham is still alive and is in her late 80s. It is unclear where she currently lives or if she has an attorney. Her last known address was in Raleigh, North Carolina.

From renewed investigations to an unpublished memoir to Hollywood retellings, Till’s name and story have been in the news a number of times over the past year.

Here’s a look at some of the instances:

What happened to Emmett Till?

As the U.S. Department of Justice calls it, Till’s death is one of the most infamous acts of racial violence in our country’s history.

In the summer of 1955, the 14-year-old Till traveled from Chicago to Money, Mississippi, to visit relatives. He stayed with family members in their home just east of Money.

On Aug. 24, 1955, Till and approximately six other youths drove to a store in Money. A witness indicated that Till bought some items in the store and left with one of his companions without incident. According to this witness, the woman then left the store, unhurried and undisturbed, at which time Till whistled at her. Till’s companions hurried to get Till away.

A few days later, in the early morning hours of Aug. 28, Roy Bryant, his half-brother John William (J.W.) Milam, and at least one other person abducted Till from the home of his relatives. Three days later, a teenager fishing in the Tallahatchie River discovered Till’s brutally beaten body floating in the river. Till’s assailants had weighed him down with a 75-pound cotton gin fan, which they tied to his body with barbed wire.

State officials charged Roy Bryant and J.W. Milam with murder; they were tried the following month and acquitted by an all-White jury.

Half-brothers Roy Bryant (left) and J. W. Milam (center) sit with an attorney as they go on trial Sept. 19th for the murder of 14-year-old negro Emmett Till of Chicago. The defendants were acquitted at the end of the trial. (via Getty Images)

During the trial, the woman at the store testified under oath, but not in front of the jury, that Till had propositioned her and physically touched her hand, arm and waist while they were both inside the store.

Following their acquittals, both Roy Bryant and J.W. Milam confessed to kidnapping and murdering Till in an account published in Look magazine in January 1956.

The Department of Justice reopened Till’s case in 2017 after a professor alleged in a book he had written that the woman who was a witness at the store had recanted her previous accounts of those events. In response, the department and the FBI examined whether the woman had recanted and, if so, whether she had information that would allow prosecution of any living person.

In December of 2021, the Department of Justice announced it was closing the case after the four-year investigation and that no additional charges were being filed. The FBI could not ascertain if the witness had lied.

The decision was a blow to Till’s family, who had been hoping to finally see a prosecution come to fruition.

"Today is a day we will never forget," Till’s cousin, the Rev. Wheeler Parker, said during a news conference in Chicago. "For 66 years we have suffered pain. ... I suffered tremendously."

Weeks later, in January 2022, the Senate passed a bill to award Till and his mother, Mamie Till-Mobley, the Congressional Gold Medal posthumously.

Till-Mobley died in 2003. She worked tirelessly for decades in the fight for justice for her son.

In March 2022, President Joe Biden signed a bill that makes lynching a hate crime, over 100 years after such legislation was first proposed. The bill was named after Emmett Till.

In the early 1920s, the NAACP began its efforts to pass an anti-lynching bill. Federal hate crime legislation eventually was passed in the 1990s — decades after the civil rights movement.

A 2020 version of the bill set the maximum sentence for lynching at 10 years. The bill Biden signed came with 30 years in prison and fines for anyone conspiring to commit an act of lynching that causes death or injury.

The warrant was dated Aug. 29, 1955, and listed "Mrs. Roy Bryant" on the document, charging her and then-husband Roy Bryant and brother-in-law J.W. Milam in Till’s abduction.

The discovery led Till’s family to renew their calls for authorities to serve the warrant and prosecute Donham on kidnapping charges.

A relative of Till said it’s long past time for someone to arrest Donham in connection with Till’s kidnapping, if not for the slaying itself. Several weeks later, Mississippi’s attorney general said the state had no plan to prosecute Donham, despite the unserved warrant and new information coming from her unpublished memoir. 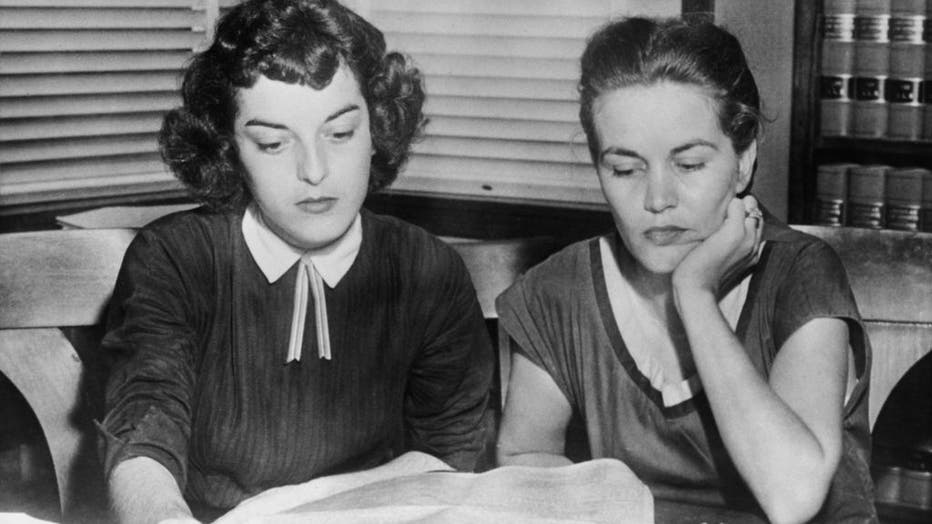 Carolyn Bryant and Juanita Milam (1927-2014), the wives of Roy Bryant and John William Milam, who stand accused of the kidnap and murder of Emmett Till, sitting in their husbands' lawyer’s office across the street from the courthouse, reading newspap

In July 2022, in the same weeks following the discovery of the unserved warrant, the Mississippi Center For Investigative Reporting published damning details from Donham’s unpublished memoir.

The MCIR obtained a copy of the 99-page manuscript, which remains sealed in the Southern Historical Collection at the University of North Carolina at Chapel Hill until 2036, according to the agency.

Historian and author Timothy Tyson has said he obtained a copy of the memoir from Donham while interviewing her in 2008. Tyson had placed the manuscript in an archive at the University of North Carolina with the agreement that it not be made public for decades, though he said he gave it to the FBI during their most recent investigation.

Tyson said he decided to make the memoir public following the discovery of the arrest warrant.

"The potential for an investigation was more important than the archival agreements, though those are important things," Tyson told The Associated Press. "But this is probably the last chance for an indictment in this case."

In the memoir, Donham says she attempted to help Till once he’d been located by her husband and brother-in-law and brought to her in the middle of the night for identification.

"I did not wish Emmett any harm and could not stop harm from coming to him, since I didn’t know what was planned for him," Donham says in the manuscript compiled by her daughter-in-law. "I tried to protect him by telling Roy that ‘He’s not the one. That’s not him. Please take him home.’" She claims in the manuscript that Till spoke up and identified himself.

Donham adds that she "always felt like a victim as well as Emmett" and "paid dearly with an altered life" for what happened to him.

"I have always prayed that God would bless Emmett’s family. I am truly sorry for the pain his family was caused," she says at the end of the manuscript, which is signed "Carolyn" but indicates that it was written by her daughter-in-law Marsha Bryant.

RELATED: Woman who claimed Emmett Till whistled at her says she didn't want him killed in new memoir

The memoir is remarkable not only because it’s the most extensive account of the sensational episode ever recorded by Donham, but also because it contains contradictions that raise questions about her truthfulness through the years, Dale Killinger, a retired FBI agent who investigated the case more than 15 years ago, told The Associated Press.

For instance, Donham claims in the memoir to have yelled for help after being confronted by Till inside the family grocery store in Money, Mississippi, yet no one ever reported hearing her screams, Killinger said. Also, Donham never previously mentioned that she and Roy Bryant chatted about the abduction. In the manuscript, she says they did.

Earlier this month, a Mississippi grand jury declined to indict Donham — a move that likely now closes the case for good.

Despite the unserved arrest warrant and unpublished memoir, Leflore County District Attorney Dewayne Richardson said the grand jury determined that there was insufficient evidence to indict Donham on charges of kidnapping or manslaughter.

The Rev. Wheeler Parker, Jr., Till’s cousin and the last living witness to Till’s abduction, said the announcement was "unfortunate, but predictable."

"The prosecutor tried his best, and we appreciate his efforts, but he alone cannot undo hundreds of years of anti-Black systems that guaranteed those who killed Emmett Till would go unpunished, to this day," Parker said in a statement.

"The fact remains that the people who abducted, tortured, and murdered Emmett did so in plain sight, and our American justice system was and continues to be set up in such a way that they could not be brought to justice for their heinous crimes."

Emmett Till TV series and movies

Renewed interest in Till’s case this past year has once again brought his story to the big screen.

Earlier this year, the ABC limited series "Women of the Movement" showcased the story of Till’s mother as she devoted her life to seeking justice. The series is available to watch now on Hulu.

Later this year, the movie "Till" is set to debut at the 60th New York Film Festival in Lincoln Center. MGM studios released the film’s trailer in July.

The film stars Whoopi Goldberg, Frankie Faison, Haley Bennett and Sean Patrick Thomas. It will be in theaters in October.

The influential 2007 documentary "The Untold Story of Emmett Louis Till", which led to a previous FBI reopening of Till’s case, is also available to stream now on select platforms.