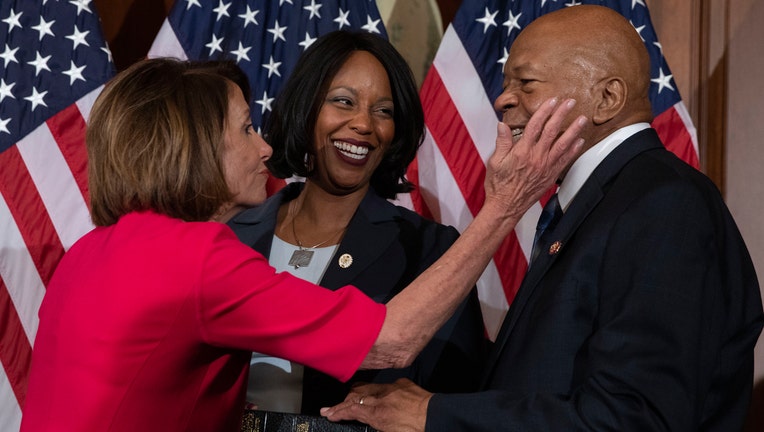 Speaker of the House Nancy Pelosi (L), D-CA, congratulates incoming Chair of the House Oversight Committee Elijah Cummings (D-MD) and wife Maya Rockeymoore during a ceremonial swearing-in at the start of the 116th Congress at the US Capitol in Washin

BALTIMORE - Maya Rockeymoore, widow of Rep. Elijah Cummings, D-Md., and chairwoman of the Maryland Democratic Party, is expected to run for her late husband’s House seat, according to a report.

Rockeymoore has not yet said whether she plans to run, The Washington Examiner reported.

The Maryland Democratic Party released a statement that Rockeymoore would not be making announcements while she grieves.

"We ask the public and the press to allow Maryland Democratic Party Chair Dr. Maya Rockeymoore Cummings — and the rest of the Cummings family — time and space to grieve their loss,” the party said.

Rockeymoore, 48, has previously worked for the Congressional Black Caucus Foundation, served as chief of staff to former U.S. Rep. Charles Rangel, D-N.Y., and was a staffer on the House Ways and Means Committee. She also ran for governor in Maryland but dropped out when Cummings was hospitalized in 2018.

Cummings was elected to his seat in Maryland’s 7th Congressional District in 1996 and served 12 terms until his death due to underlying health conditions.

Maryland Gov. Larry Hogan has 10 days to schedule a special election for Cummings' seat, but he has wide leverage over when it will take place. It could be as early as February or more than a year from now, The Baltimore Sun reported.

Cummings and Rockeymoore married in 2008, according to the Examiner.

Cummings will lie in state at the U.S. Capitol next week and a funeral will be held in Baltimore on Friday.