Concerned residents say there’s a serious issue with traffic safety at Gaithersburg’s Downtown Crown but there appears to be a mystery behind which police department or community entity can take action.

GAITHERSBURG, Md. (FOX 5 DC) - Concerned residents say there’s a serious issue with traffic safety at Gaithersburg’s Downtown Crown but there appears to be a mystery behind which police department or community entity can take action.

Todd Moniot captured a serious incident on his home surveillance video from last Friday. In the video, he says a neighbor was struck by a car trying to cross Alcott Place. A vehicle making what appears to be an illegal U-turn may have aided to Moniot’s neighbor getting hit. The U-turning car appears to also be obstructing the view of a pedestrian crossing.

According to the video, this also happened after what appears to be a security vehicle turned and passed the area.

“GOD ALMIGHTY!” you can hear the woman yell in the surveillance video.

“It’s a pretty regular event. Some sort of incident occurring around people making illegal U-turns and hitting each other,” said Moniot in a Facetime interview from his office in Washington D.C., “Car accidents are pretty common. Again, people fighting over spaces. We had an incident a couple weeks ago where the cops were there. Some guy was fighting over a space, grabbed the woman’s keys and threw it on the roof of someone’s house. So they’re becoming more common place unfortunately.”

Both local and county police respond to serious incidents in the area. Moniot reached out to FOX 5 concerned over who is enforcing the traffic violations that neighbors are noticing.

“I feel like people don’t realize this is a neighborhood that a lot of people live in and walk around it. And they just, I personally think they drive really fast,” said Taylor Vitelli, visiting her mother.

Eileen Nason told FOX 5 she moved to the Downtown Crown about three years ago because of the neighborhood’s walkability. “Number one, a lot of people use these two roads … to turn their cars around,” Nason said pointing to Kepler Drive and another street. 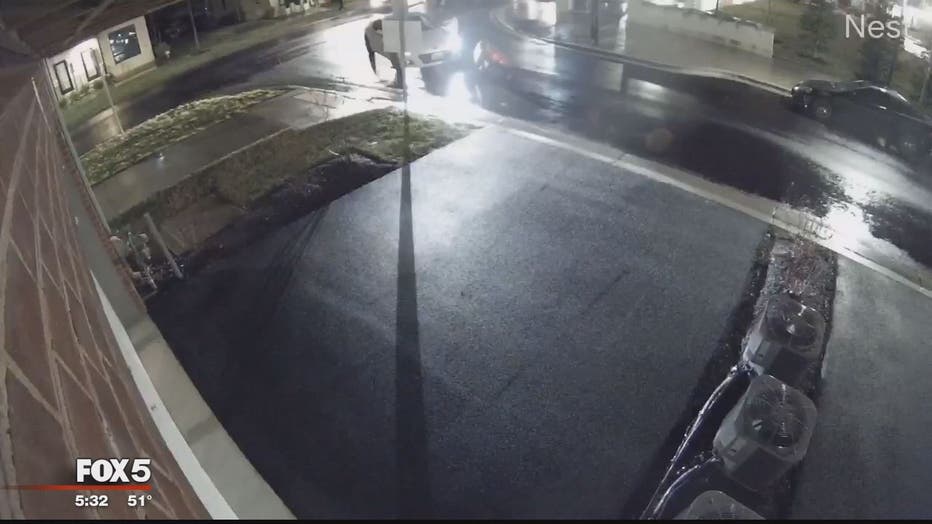 Last September, an elderly woman was hit by a car near the Downtown Crown’s LA Fitness. She died from her injuries, heightening concerns in the community.

“Back in October 24th, we had a regular HOA Crown Board meeting and we raised this with the developer,” said Moniot, “We had police in from Montgomery County and police in the City of Gaithersburg. And they basically told us they don’t have any jurisdiction to enforce traffic rules at all inside of Downtown Crown.”

Mike Aubrey, Vice President of Compass Real Estate, also lives in the Downtown Crown.
“Unfortunately Crown is in a weird position that the developer hasn’t turned the community over, yet, completely to the Homeowners Association,” Aubrey explained, “and the streets that are out there are actually under the control of the Maryland Department of Highways, not the city of Gaithersburg.”

FOX 5 checked with Gaithersburg Police and was told the one person we can talk to was out sick on Monday. We also checked with the Gaithersburg City Council. A member of their planning office was working on an answer but did not respond by the time of this report.

It’s not clear if the confusion is connected to the community still being developed.

FOX 5 also reached out to multiple people associated with the Downtown Crown complex and did not hear back.

“I mean, that seems strange to me – if there’s a crime committed, whether it’s a traffic crime or a property crime or something big, police should have the jurisdiction and the authority they need. I don’t know if the rules of Montgomery County are just very archaic and you know, they need to catch up with the developments that are occurring more now a days,” said Moniot.

FOX 5 witnessed a dozen or more cars make U-turns by Crown Park Ave. and Alcott Pl. There are also no signs prohibiting a U-turn at that corner or speed limit signs in that stretch.