Dorian was upgraded to a dangerous Category 4 hurricane as it continued its path toward Florida late Friday evening.

TAMPA, Fla. - Hurricane Dorian continued to strengthen Friday and was upgraded to a Category 4 in the evening hours as Florida residents braced for what could be the most powerful storm to hit the state's east coast in nearly 30 years.

Hurricanes reaching Category 3 and higher are considered “major hurricanes” on the Saffir-Simpson Hurricane Wind Scale because of their potential for significant damage.

Dorian was located fewer than 600 miles east of West Palm Beach as of 9 p.m. EST. It had maximum sustained winds of 130 mph and was moving west at 9 mph.

The storm is expected to approach the northwest Bahamas on Saturday and then move over or near that region on Sunday. 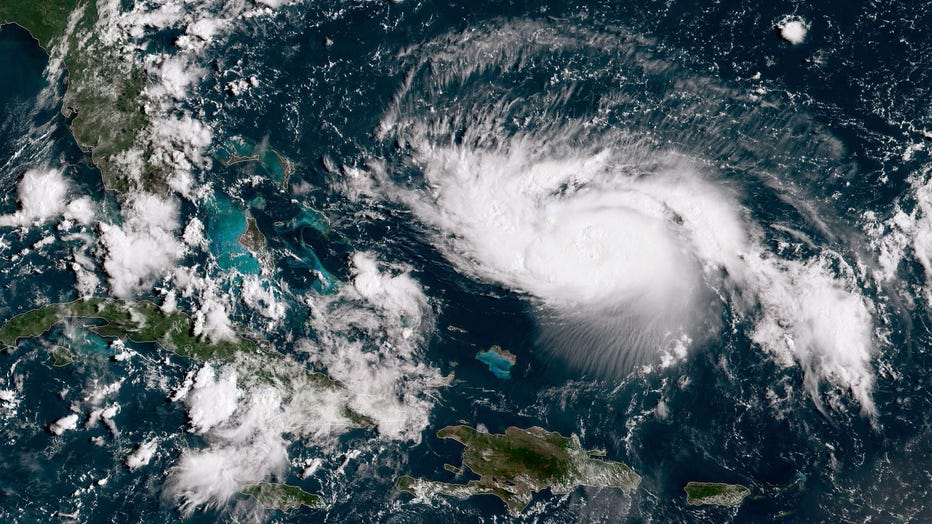 In this NOAA GOES-East satellite image, Hurricane Dorian, now a Cat. 3 with maximum sustained winds of 115 mph, gains strength as it tracks towards the Florida coast taken on August 30, 2019 in the Atlantic Ocean. (Photo by NOAA via Getty Images)

President Donald Trump, whose Mar-a-Lago resort in Palm Beach was in the crosshairs, warned Thursday night it could be an "absolute monster."

"All indications are it's going to hit very hard and it's going to be very big," Trump said in a tweeted video, comparing Dorian to Hurricane Andrew, which obliterated thousands of homes south of Miami with winds topping 165 mph in 1992.

RELATED: These are 5 of the worst hurricanes to have made landfall in the US

The National Hurricane Center said Friday the storm was expected to slam into the U.S. on Tuesday — nearly 10 mph faster and a day later than previously forecast.

RELATED: The devastating differences between hurricane categories 1 through 5

The hurricane center's projected track showed the storm hitting around Palm Beach County, the site of Mar-a-Lago. But predicting its course with any confidence this far out is so difficult that the "cone of uncertainty" on the map covered nearly all of Florida's 500-mile coastline, with Miami, Fort Lauderdale and Orlando all within the danger zone.

"When that happens, you'll start to see a better-looking storm – structurally wise," Osterberg said. "This will happen over the course of the next 24 hours."

Forecasters warned that the storm's slow movement could subject the state to a drawn-out pummeling from wind, storm surge and heavy rain.

With the storm's track still unclear, no immediate mass evacuations were ordered.

Along Florida's east coast, local governments began distributing sandbags, shoppers rushed to stock up on food, plywood and other emergency supplies at supermarkets and hardware stores, and motorists topped off their tanks and filled gasoline cans. Some fuel shortages were reported in the Cape Canaveral area.

RELATED: Be prepared: If you're in the path of a hurricane, here's what to do

This Associated Press contributed to this report.