MINNEAPOLIS (FOX 9) - The state called witnesses and experts to the stand Wednesday to testify in the trial of Derek Chauvin, the former Minneapolis police officer charged in the death of George Floyd.

Here are the witnesses who testified on Wednesday:

Stiger said he analyzed the video and determined Floyd was restrained for nine minutes and 29 seconds, during which Chauvin's knee restraint did not change.

Stiger also pointed out a moment where Chauvin used a pain compliance technique on Floyd where he squeezed Floyd's handcuffed hand in an effort to get him to comply to commands.

Stiger testifed that force should not have been used on Floyd while he was in the prone position, handcuffed and not resisting.

"My opinion is no force should have been used once he was in that position," Stiger said.

Stiger said in his analysis he did not see the crowd of bystanders as a threat because they were "merely filming" and the shouting was mostly of "their concern for Mr. Floyd." He said he didn't see anyone throw anything or attack the officers.

During cross examination, defense attorney Eric Nelson played a short clip from Kueng's body worn camera during the arrest and asked Stiger if he can hear Floyd say, "I ate too many drugs."

After playing the video a few times, Stiger said he can't make out what Floyd is saying.

The audio is difficult to decipher due to background noise.

Defense attorney Eric Nelson cross-examines expert witness Sgt. Jody Stiger, highlighting a portion of video in which George Floyd can be heard saying something, but it is unclear what he is saying. Nelson said it is possible Floyd is saying that he ate too many drugs. Stiger said he could not tell what was said.

However, during redirect the prosecution played a longer version of the clip. After listening to more context, Reyerson said he thinks Floyd said, "I ain't do no drugs."

Nelson confirmed with Stiger that using a knee on the back of a subject's neck area, the trapezius, is standard police practice. However, Stiger said training indicates even if the person is resisting, the officer should eventually change the subject's position.

"In most cases however especially in last 20 years, once you handcuff them, you still want to put them in a side recovery position," said Stiger.

Nelson showed side-by-side video of bystander video with J. Alexander Kueng's body camera video. Stiger agreed from the view of Kueng's camera Chauvin's knee appeared to be at the base of Floyd's neck in between the shoulder blades.

During redirect, prosecuting attorney Steve Schleicher asked what causes the risk of positional asphyxia, where someone may become unable to breathe during restraint.

Stiger agreed this could occur even if the placement of the knee shifted during the restraint.

McKenzie Anderson, a forensic scientist for the Minnesota Bureau of Criminal Apprehension was the crime scene lead in the case.

During her testimony, she described how her team processed the evidence found in the two vehicles connected to the case -- the police squad vehicle and the Mercedes SUV that Floyd was in before he was arrested.

She said she and other investigators first processed the vehicles on May 27, taking photos of what was found.

They searched the Mercedes a second time in December after receiving a request from the attorney general's office. This time, they were told to specifically search for suboxone, pills, gum and money. Suboxone is a prescription given to those who are battling opioid addiction. 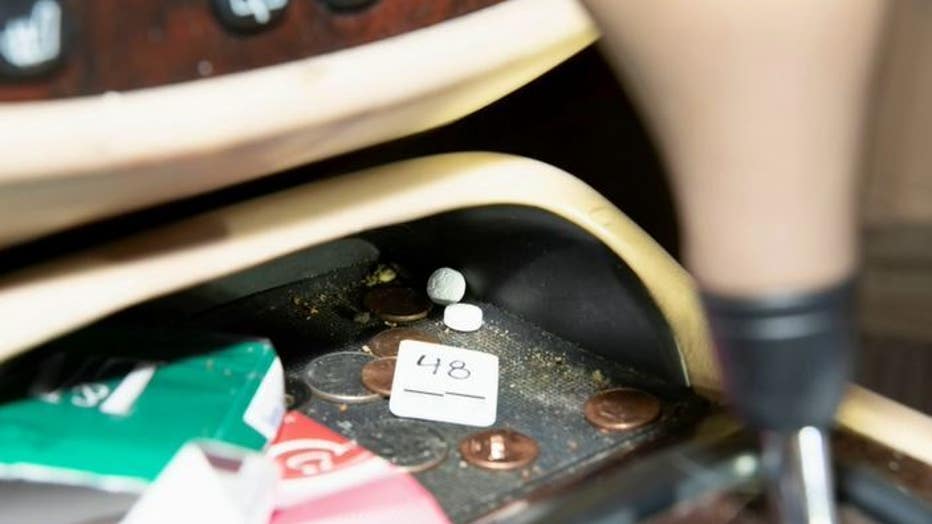 Two loose pills were found in the center console of the Mercedes Benz SUV that George Floyd was in before his arrest.

The squad vehicle was also processed a second time in January. While a pill was photographed on the floor of the back seat the during the first search, it was not taken into evidence until the second search. In addition to the full pill, Anderson described finding what appeared to be portions of pills in the back seat.

Mckenzie Anderson, Minnesota BCA crime scene lead, testifies about photos showing the inside of the Minneapolis squad car involved in the George Floyd arrest. Remnants of pills were found and documented in the backseat of the squad.

Anderson said she completed DNA testing of the pill found in the squad car and found saliva on the pill matched Floyd's DNA.

Blood found in the back seat of the squad vehicle also matched Floyd's DNA , Anderson testified.

Mckenzie Anderson, Minnesota BCA crime scene lead, testified that the team identified eight spots of the squad car that tested positive as blood. Through a DNA test, they were able to determine the blood belonged to George Floyd.

BCA forensic scientist Breahna Giles testified that she tested the pills found in the Mercedes. She said those tablets contained methamphetamine and fentanyl.

Giles said a pill and a partial pills found in the police squad car tested positive for methamphetamine.

Susan Neith, a forensic chemist, tested the concentrations of fentanyl and meth found in the pills recovered from the vehicles.

She said for the pills found in the Mercedes, both had a fentanyl concentration less than 1 percent. One tablet had 1.9 percent meth, while the other had 2 percent meth.

For the pill found in the squad car, the fentanyl concentration was less than 1 percent and meth was 2.9 percent.

Stay up to date on the trial of Derek Chauvin. Sign up for FOX 9's email newsletter for daily updates. Get breaking news alerts and watch the live stream in the FOX 9 News app. Download it for Apple or Android.