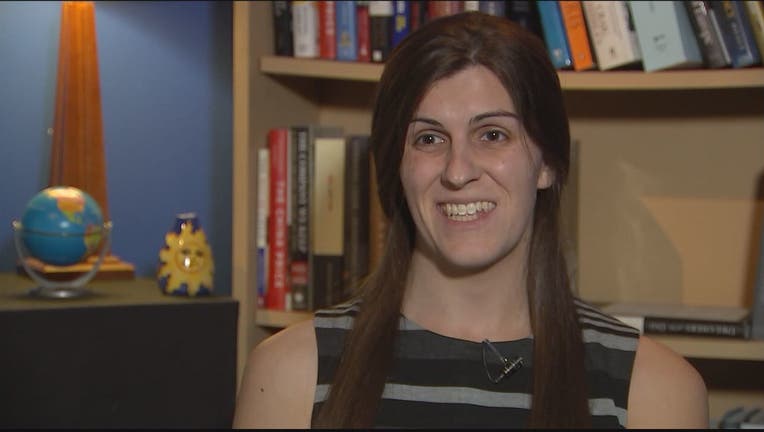 MANASSAS, Va. (AP) - A dreary, congested Virginia highway has reaped an unexpected measure of fame through its role in a historic legislative campaign.

Last month, Danica Roem became the nation's first openly transgender person elected and seated in a state legislature. She credits her victory to staying relentlessly focused on the issues, as opposed to her gender.

The centerpiece of her campaign was a promise to fix gridlock on state Route 28, which she promoted ceaselessly, even as others wanted her to discuss gender.

"We've now made Route 28 world famous," she said in a call with reporters shortly after her election over incumbent Republican Robert Marshall, a social conservative.

Roem even gave Route 28 a plug on the red carpet when she was singer Demi Lovato's guest at the American Music Awards earlier this month.

Everyone agrees Route 28 is a problem. But officials who've been working to improve the corridor find Roem's favored solution lacking.

The state highway running through Roem's district connects some of northern Virginia's outer suburbs, which have grown tremendously in the past two decades. Route 28 gridlock has grown even as northern Virginia -- synonymous with traffic -- has taken major steps to address congestion on Interstates 66 and 95, which funnel commuters directly into the nation's capital.

Earlier this year, a Northern Virginia Transportation Authority study of Route 28 narrowed about 15 potential options to four. Remaining options include creating a bypass to take pressure off the highway or widening it from four lanes to six.

Roem, though, has embraced a wholly different idea: replacing the stoplights on Route 28 with flyovers to eliminate stop-and-go traffic. She says the overpasses would create "flow-and-go" on the road and would obviate the need to condemn homes and businesses along the corridor.

Marty Nohe, chairman of the transportation authority and a supervisor in Prince William County, said Roem's idea would spend a lot of money for little improvement.

"What we need is more capacity," Nohe said. Removing traffic lights is not helpful if more lanes aren't created, he said.

Prince William transportation officials said in a statement that they are focused on long-term solutions for Route 28 and flyovers don't fit that bill.

Roem acknowledged that none of the study's recommended alternatives appeal to her, for various reasons. In particular, she opposes one proposal that would require removing a mobile home park to acquire the necessary right of way.

"I'm not just looking at dollars and cents. I'm looking at quality of life," she said.

She said she realizes compromises will be necessary and allowed that she may be able to support a bypass if the route can be tweaked to minimize condemnations.

"I've done my homework on this," she said. "I've really thought it through."

Drivers, like politicians, have different views on what would work best. Ashok Gupta of Nokesville drives 40 minutes a day to the service station he owns on Route 28. Fifteen years ago, he said, the same commute took 20 minutes.

Gladis Cespedes, filling up her tank at Gupta's service station, said her husband regularly contends with the worst of the 28 gridlock.

Though Nohe, a Republican, disagrees with Roem, a Democrat, about the best options for improving the corridor, he said he is thrilled that she has brought the issue into focus. He said he got calls from reporters about the highway after she mentioned it at the music awards.

"That is flippin' fantastic," he said.