At just six weeks old, DC9 is already a star.

At just six weeks old, DC9 is already a star. That’s why social media had a meltdown when a man recently appeared at the National Arboretum’s eagle nest to remove the baby bird for a bit.

"I can see a lot of people watch these cameras," said Dan Rauch, a D.C. Department of Energy and Environment Biologist. "There’s been over 100 million individual viewers, where I mean, we’ve been seen in over 100 countries."

Rauch said that when the mystery man appeared to take the baby eaglet away, he started receiving calls from viewers asking him what was going on.

Don’t worry was Rauch’s main message to the concerned callers.

The effort to track D.C.’s eagles involves the District’s Department of Energy and Environment, the United States Department of Agriculture, and the American Eagle Foundation — which runs the live D.C. eagle cams.

Rauch told FOX 5 that the short check-up last week is something they only have to do once in the eagle’s lifetime. The District biologist told FOX 5 they hired an eagle and tree climbing specialist out of California to fly in and examine the eaglet. Experts try to do this when the eaglet is 4-6 weeks old because the baby bird cannot fly on its own then, therefore, it wouldn’t be able to get away if it's "spooked." 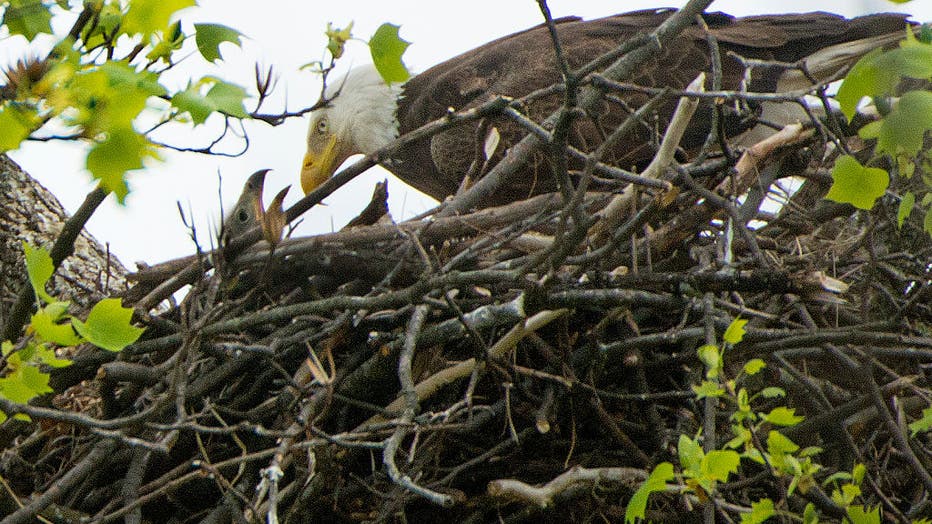 DC9 is also old enough that it can regulate its own body temperature, so it’s safe to be on its own for a bit.

Rauch said that right now, DC9 is about the size of a pug or a full-grown chicken.

The Twitter account @naeaglecam showed off DC9’s new USGS aluminum band for tracking. Rauch told FOX 5 that as far as he can recall, this may be the first D.C. eagle to get a tracker.

The specialist measured DC9's size, his talons, beak and took blood samples. Rauch also hopes that blood samples may help scientists learn more about why his sibling didn’t survive and tell experts more about the health of the Anacostia River.

Mom and dad, Lotus, and Mr. President can be spotted flying around Kingman Island in Northeast D.C.

Rauch said you’ll see "Mr. P" bringing fish and groundhogs to his baby. He was spotted on camera covering his baby from Friday and Saturday’s storms.

The District’s eagle nest returned to the Anacostia River and National Arboretum area around 7 years ago. Rauch told FOX 5 that the return of the eagles speaks to how much healthier the surrounding environment has become.

"I’m hoping that if you become invested in this pair, you’ve become invested in eagles as a whole and eagles, not just eagles, but the environment they use and the other birds that use that same environment," Rauch, said. "So it's kind of, you know, you see things in the nest. Sometimes, there’s maybe a plastic bag or trash in there or maybe there’s a fishing line. You can see what happens … Yes, they’re not endangered anymore, but we still need to keep an eye on these populations because we want them to be there."

Eagles are no longer endangered, but they are still protected.