D.C. police were escorting the Senator, who said he was attacked by a “crazed mob” following the President’s speech.

READ MORE: Sen. Rand Paul thanks DC cops for saving him from 'crazed mob' after RNC

According to the Department of Justice, Brennen Sermon, 27, of Orland, was arraigned in D.C. Superior Court on one count of assault on a law-enforcement officer. He was released on his own recognizance. 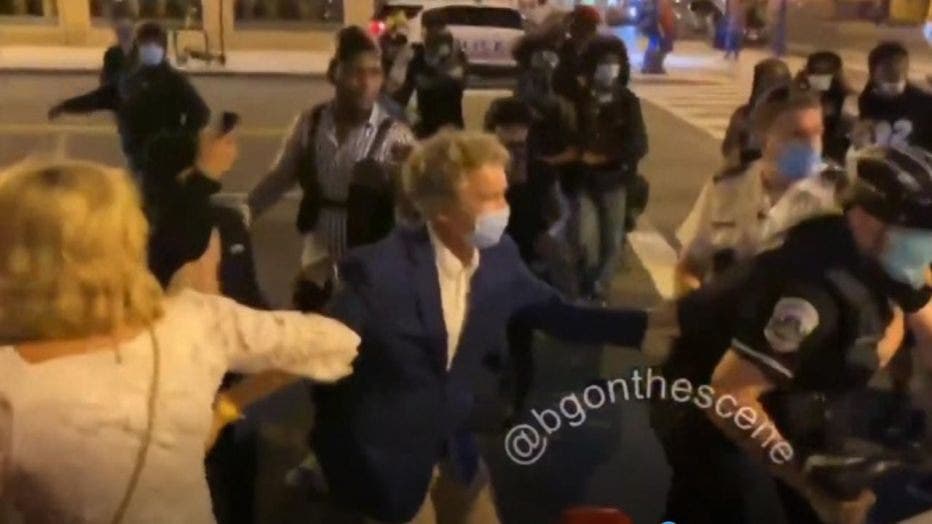 Investigators say that, around 12:30 a.m. on Aug. 28, a D.C. officer was holding a police line at 14th and F Street, Northwest when Sermon kicked his bicycle and ran away.

When the officer chased him, Sermon allegedly punched him in the face.

Hundreds of protesters had gathered outside the White House on

Thursday evening as President Trump prepared to give his speech from the South Lawn.

Fencing was set up along the perimeter of the White House to keep protesters away, but shouts could be heard from the South Lawn.

Protesters yelled, “No justice, no peace!” and “Join us!” while holding anti-Trump and Black Lives Matter signs, beating drums and playing other music.

The demonstration was complete with a band, what appeared to be a “party” school bus and a character dressed as the infamous Baby Trump holding a cell phone. Images showed attendees taking photos of a guillotine with an effigy of Trump.

Once Trump's speech was over, the unrest seemed to intensify.

Videos emerged on social media that appeared to show city police clashing with protesters who called them names like "pig." There were unconfirmed reports of arrests.