WASHINGTON - U.S. Sen. Rand Paul, R-Ky., said he was attacked by a "crazed mob" of more than 100 people after leaving the White House following President Trump's acceptance speech at the Republican Convention.

"Just got attacked by an angry mob of over 100, one block away from the White House, he wrote on Twitter early Friday. "Thank you to @DCPoliceDept for literally saving our lives from a crazed mob." 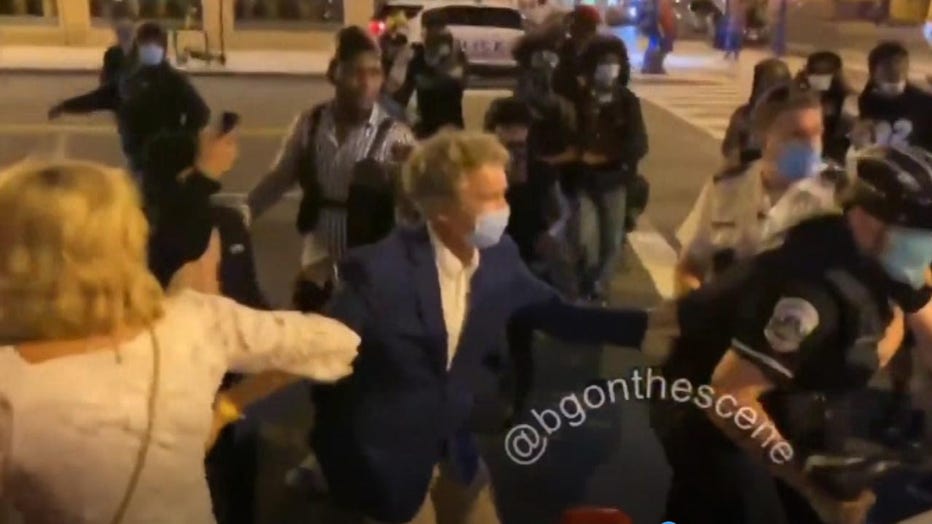 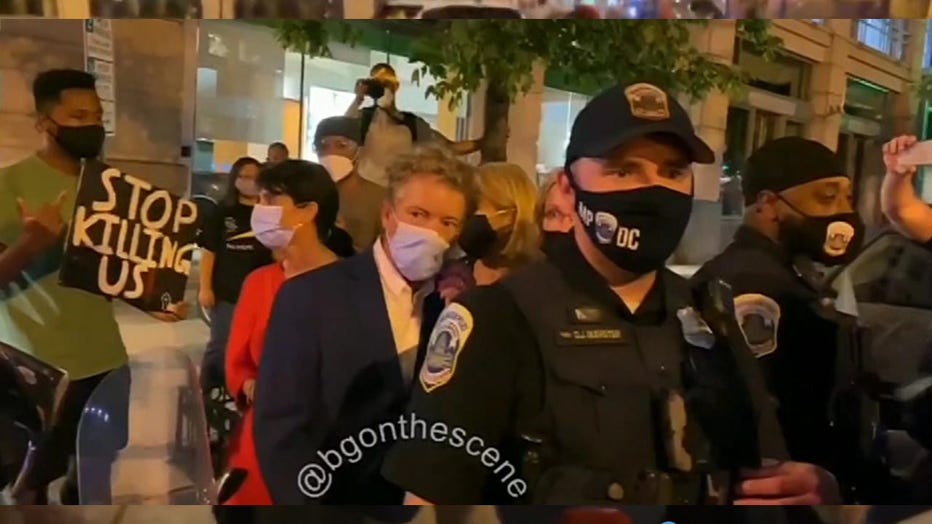 Video on social media appeared to show a crowd chasing and jeering Paul, who was escorted by D.C. police as he returned to his hotel. An officer was captured on video being shoved by a protester and was nearly knocked over. Paul appeared to help steady the officer.

Police formed a wall around Paul and his wife, Kelley Paul as protesters chanted, "Breonna Taylor" and "no justice, no peace!"

Paul had introduced the Justice for Breonna Taylor Act in June to prohibit no-knock warrants, which allow law enforcement officials to forcibly enter a home without announcing their authority or purpose.

The bill was named in honor of Taylor, a Louisville resident who was killed during a police raid on her home in March, under the authority of a no-knock warrant.

Hundreds of protesters had gathered outside the White House on Thursday evening as President Trump prepared to give his speech from the South Lawn.

Fencing was set up along the perimeter of the White House to keep protesters away, but shouts could be heard from the South Lawn.

Protesters yelled, “No justice, no peace!” and “Join us!” while holding anti-Trump and Black Lives Matter signs, beating drums and playing other music.

The demonstration was complete with a band, what appeared to be a “party” school bus and a character dressed as the infamous Baby Trump holding a cell phone. Images showed attendees taking photos of a guillotine with an effigy of Trump.

Once Trump's speech was over, the unrest seemed to intensify. Videos emerged on social media that appeared to show city police clashing with protesters who called them names like "pig." There were unconfirmed reports of arrests.

Video emerged that claimed to show a bus carrying RNC attendees being targeted by protesters, some of whom jumped on and tried to gain entry. Others appeared to try and prevent the bus from backing up.

"Hey, ya'll ... want to hang out and play?" one protester could be heard yelling to those inside as he appeared to bang on the vehicle. "Hey, excuse me ... I'm just trying to hang out," he continued.

"Go to hell," one person could be heard shouting.

An elderly couple was confronted as they crossed the street by at least one protester who screamed at them while making an obscene gesture, according to a video.

The demonstration outside the White House had three stages and five DJs for the “Drown Out Trump Live GoGo Show and Noise Demo” planned to coincide with Trump’s speech.

Protesters also reportedly planned a yoga session, vigil for Black lives killed by police and a “paint and protest.”

There were small arguments between anti-Trump protesters and those supporting the president, The Washington Post reported.