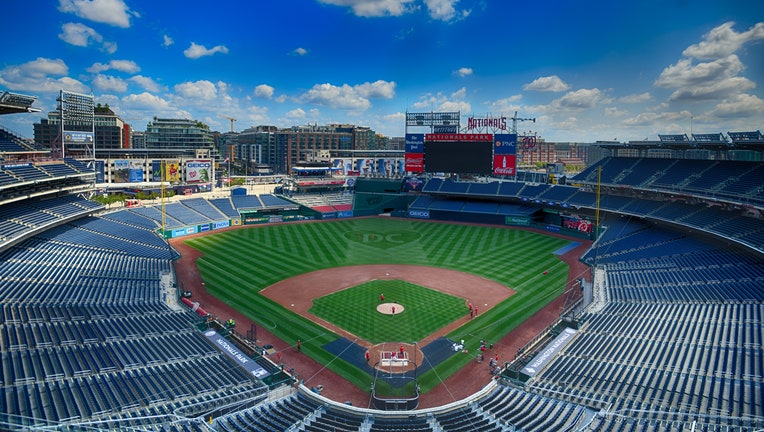 WASHINGTON - The future of Nationals Park is bit clearer.

The Department of Consumer and Regulatory Affairs (DCRA), the city’s permitting agency, released a statement saying it will reissue another temporary occupancy permit to Nats Park to keep the park open and running.

In a statement, DCRA said that it will issue another Conditional Certificate of Occupancy for the park through December 31, 2023.

"Since the opening of Nationals Park in 2008, operations have been allowed under a series of Conditional Certificates of Occupancy (C of Os) issued by the Department of Consumer and Regulatory Affairs (DCRA). DCRA has issued Conditional C of Os with the understanding that a good faith effort was being made to fulfill a Planned Unit Development (PUD) agreement entered into by Events DC with the Zoning Commission, and as the property was considered an active construction project. Fulfillment of the agreement as written would conclude the project and allow DCRA to issue a permanent C of O, pending a final inspection.

For 16 years, compliance with the agreement has been avoided by applying for Conditional C of Os. At this time, with no immediate construction occurring, a permanent solution is sought so that a permanent C of O may be issued. Earlier this summer, DCRA requested that Events DC, as a sign of good faith, file an application with the Zoning Commission to modify the PUD agreement. As Events DC has followed through on the filing request, DCRA will issue another Conditional C of O which will expire on December 31, 2023 to allow time for the Zoning Commission to issue a ruling, and or for Events DC to submit any construction plans for review and approval."

Future of Nationals Park could be in doubt

DCRA, the city’s permitting agency, opted not to re-issue another temporary occupancy permit to Nationals Park until the owner, Events D.C., goes before the city’s Zoning Commission, putting the future of the stadium in doubt. FOX 5's Stephanie Ramirez reports.

The decision comes as the previous temporary occupancy permit was set to expire on September 30.

Previous reports indicated that DCRA would not reissue another temporary occupancy permit to Nats Park until the owner, Events DC, had gone before the city’s zoning commission.

The dispute has to do with Events DC not living up to a deal made when the stadium was agreed to be built. When D.C. officials signed off on the stadium 16 years, it was done under the condition that the ballpark would also include 46,000 square feet of space for shops, services, entertainment, and art.

That area was supposed to be on the First St. and Potomac Ave. side of the stadium. But that has not happened for several reasons including the 2008 recession and the coronavirus pandemic. To keep the stadium up during that time, DCRA kept issuing temporary certificates of occupancy.

Events DC owns Nats Park along with a number of other venues, including RFK Stadium and the Convention Center.

A spokesperson tells FOX 5 the stadium did include about 17,000 square feet of other use space when it opened the stadium in 2008. Events DC’s attorney has submitted a request, asking the zoning commission to reduce the required space to the 17,000 square feet that the stadium already maintains. The group is also asking for a timeline to be set to build out the current space.

In a statement to FOX 5, Events DC said: "Events DC looks forward to the Zoning Commission’s decision regarding the existing retail space at Nationals Stadium along First Street in Southeast. The approximately 17,000-square-feet of retail space was built as a shell within the original stadium and delivered in 2008, per the zoning order. However, the neighborhood at the time was in the early stages of redevelopment and could not support new retail, thus Events DC made the decision to align the retail development with that of the neighborhood. The Washington Nationals had a plan for the potential retail and entertainment space that was supported by Events DC and approved by DC Council in 2019, but due to the pandemic those plans did not come to fruition."