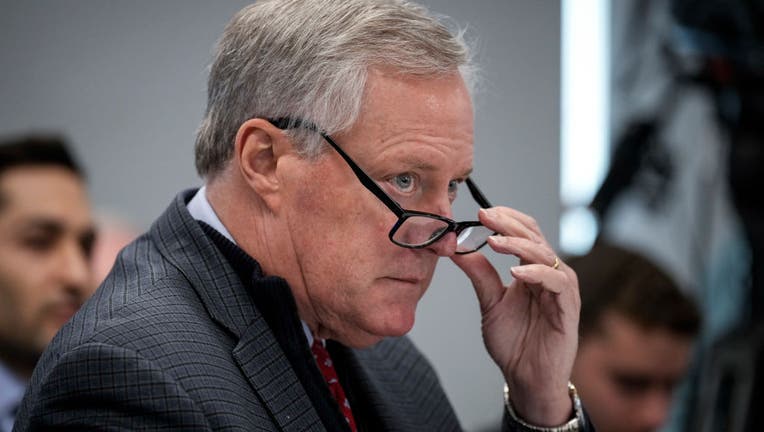 WASHINGTON, DC - NOVEMBER 14: Former White House Chief of Staff during the Trump administration Mark Meadows speaks during a forum titled House Rules and Process Changes for the 118th Congress at FreedowmWorks headquarters on November 14, 2022 in Was

The state high court on Tuesday affirmed a lower court ruling last month ordering Meadows to appear before the panel. The former Republican congressman is the latest Trump associate to lose a legal fight over a summons to testify.

The South Carolina Supreme Court opinion says the justices reviewed Meadows’ arguments and found them to be "manifestly without merit."

Fulton County District Attorney Fani Willis, who’s leading the investigation, has said Meadows is an important witness. Because he doesn’t live in Georgia, she had to use a process that involved getting a judge in South Carolina, where Meadows lives, to order him to travel to Atlanta to testify.

Meadows had originally been ordered to testify Wednesday. It was not immediately clear whether that would be rescheduled.

In a petition seeking his testimony, Willis wrote that Meadows attended a Dec. 21, 2020, meeting at the White House with Trump and others "to discuss allegations of voter fraud and certification of Electoral College votes from Georgia and other states."

The next day, Willis wrote, Meadows made a "surprise visit" to Cobb County, just outside Atlanta, where an audit of signatures on absentee ballot envelopes was being conducted. He asked to observe the audit but wasn’t allowed to because it wasn’t open to the public, the petition says.

Meadows also sent emails to Justice Department officials after the election alleging voter fraud in Georgia and elsewhere and requesting investigations, Willis wrote. And he took part in a Jan. 2, 2021, phone call with Georgia Secretary of State Brad Raffensperger, during which Trump suggested that Raffensperger, the state’s top elections official and a Republican, could "find" enough votes to overturn the president’s narrow loss in the state.

An attorney for Meadows had argued that executive privilege and other rights shield him from testifying. He previously invoked that privilege in a fight against subpoenas issued by the U.S. House committee investigating the Jan. 6, 2021, attack on the U.S. Capitol.

Meadows has been fighting investigations into the violent 2021 insurrection since last year and has so far avoided having to testify about his role and his knowledge of the former president’s actions. He turned over thousands of texts to the House Jan. 6 committee before eventually refusing to do an interview.

The House held Meadows in contempt of Congress for defying the subpoena, but the Justice Department declined to prosecute.

Special grand juries in Georgia cannot issue indictments. Instead, they can gather evidence and compel testimony and then can recommend further action, including criminal charges, in a final report. It is ultimately up to the district attorney to decide whether to seek an indictment from a regular grand jury.