LOS ANGELES - Amid panic buying caused by mass shutdowns of non-essential businesses during the COVID-19 pandemic, photos of signs at some Costco stores have begun circulating on social media that explain that returns on various high-demand items will not be accepted.

One Instagram page called “costcoinsider,” which describes itself as a page with “insider secrets” on the company, posted a picture of a notice that appears to be taped to a Costco register. The sign reads ,“returns will not be accepted on: toilet paper, paper towels, sanitizing wipes, water, rice and lysol.”

A Costco spokesperson said that the information regarding the refusal to accept returns on these items is correct.

Many of the items have become highly coveted as consumers rush to stockpile supplies in preparation for lockdowns that have been implemented by local governments in areas across the U.S.

In order to combat the chaos of panic buying, some grocery store chains have dedicated store hours to senior citizens as a way of easing fears for vulnerable consumers most in need of items that are quickly being hoarded and emptied from shelves.

Target, Whole Foods, Walmart and Dollar General, as well as supermarkets in Europe, began dedicating early morning shopping times for older customers this week. The theory is that allowing seniors to shop among smaller crowds could reduce their chances of acquiring the novel coronavirus and give them the first crack at buying hand sanitizer and other products that have been hard to find because of panic shopping. 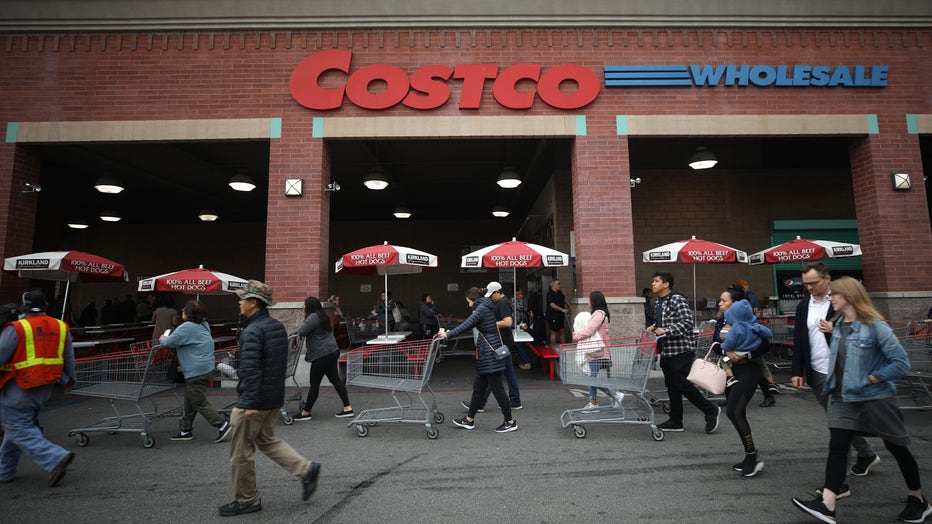 FILE - People walk to enter a Costco Wholesale store shortly after it opened on March 12, 2020 in Glendale, California.

Such stockpiling is expected to last for weeks, resulting in a boon for discounters and grocery stores as well as food delivery services that is also introducing logistical headaches at the same time. Costco Wholesale Corp.’s Chief Financial Officer Richard Galanti described the buying frenzy as “off the charts″ throughout the U.S. in a call with investors this week.

RELATED: Coronavirus cleaners: These products will kill COVID-19, according to the EPA

Another Instagram account titled “costcobuys” posted a photo of the same notice indicating that the company won’t be accepting returns on these hoarded items, while it was not made clear whether the photos were taken at the same location.

A spokesperson for the “costcobuys” Instagram account said that a fan had sent them the photo of the notice but they were not aware if the policy was being implemented in Costco stores nationwide. They added that they are not actually affiliated with Costco, just “super fans” of the company.

A spokesperson for the “costcobuys” and “costcoinsider Instagram accounts said that a fan had sent them the photo of the notice. They added that they are not actually affiliated with Costco, just “super fans” of the company.