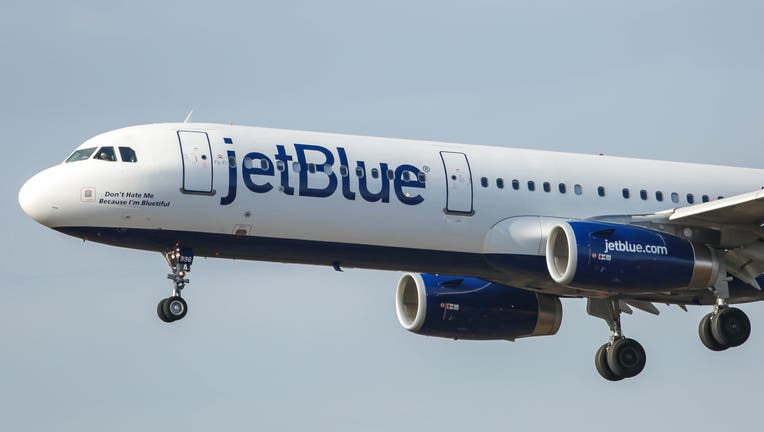 Flight 253 landed at 8:53 p.m. Wednesday. The passenger was reportedly taken to the back of the plane after complaining about coronavirus-like symptoms. The plane remained on the tarmac until 10:45 p.m.

A passenger told the local FOX station that the man across the way from him was wearing masks and gloves. The man's wife told the passenger that her husband wasn't feeling well and had received his test results just before take-off.

Palm Beach County Fire Rescue notified all passengers that the guidelines for a COVID-19 patient were followed, reported the Palm Beach Post.

"Passengers who were near the person "were advised of monitoring procedures. Other passengers “were released to go home” and told to call the Florida Department of Health’s Palm Beach County office “with any medical concerns," according to the paper.

FOX 5 NY has reached out to JetBlue for comment and are awaiting a response.

Late Wednesday and early Thursday, the Florida Department of Health announced six more cases of COVID-19. They included a 61-year-old male in Broward County whose travel-related case is associated with the Port Everglades cruise ship terminal. Two more — a 65-year-old Broward man and a 57-year old Lee County man, are being investigated to see if they are travel-related.

"We are not seeing community spread, but this is something we are watching very very carefully," Florida Surgeon Gen. Scott Rivkees said during a Wednesday afternoon news conference.

For most people, the new coronavirus causes only mild or moderate symptoms, but it can cause more severe illness including pneumonia in older adults and people with existing health problems. The vast majority of people recover from the new virus within weeks.

The agency recommends that anyone experiencing symptoms after attending Daytona Beach's Bike Week, which is continuing through March 15, or an EMS conference in Tampa from March 4-6 to contact their local health department and self-isolate for 14 days.

Gov. Ron DeSantis said 10 of the positive cases — including one of the fatalities, a 71-year-old man from Santa Rosa County — involved people returning from a cruise on the Nile River in Egypt.

Meanwhile, public universities across Florida — which have some of the country's largest enrollments — will move to remote instruction effective Monday. That step is intended to minimize health and safety risks to students and staff, especially as they prepare to return from spring break.

On Wednesday, the governor also placed limits on who can visit Florida's nursing homes and other assisted living facilities in an attempt to protect the state's sizable and vulnerable elderly population from the new coronavirus.

The governor's executive order prohibits anyone who recently arrived from a foreign country from visiting nursing and assisted care facilities. DeSantis noted that most of the Florida infections from the virus, which causes the disease COVID-19, stemmed from international travel.

“These are important efforts to mitigate the risk to our most vulnerable population to COVID-19, which is our elderly population,” DeSantis said at an afternoon news conference at the state Capitol in Tallahassee.

As a further precaution, the governor also urged elections officials to move any polling places that might be located at nursing homes or other facilities that house or care for the elderly.