Christmas star planetary conjunction will light up sky on Dec. 21

The phenomenon is nicknamed the Christmas star and the vibrant planetary conjunction will be easily visible to the naked eye as a double planet.

LOS ANGELES - Skywatchers are in for a holiday treat, as Jupiter and Saturn are set to cross paths in the night sky.

The phenomenon is nicknamed the "Christmas star" and the vibrant planetary conjunction will be easily visible to the naked eye as a "double planet."

"Jupiter and Saturn are the two largest planets in our solar system, and Jupiter is moving faster than Saturn, so every 20 years, Jupiter overtakes Saturn," Henry Throop, an astronomer with NASA, told FOX TV Stations. 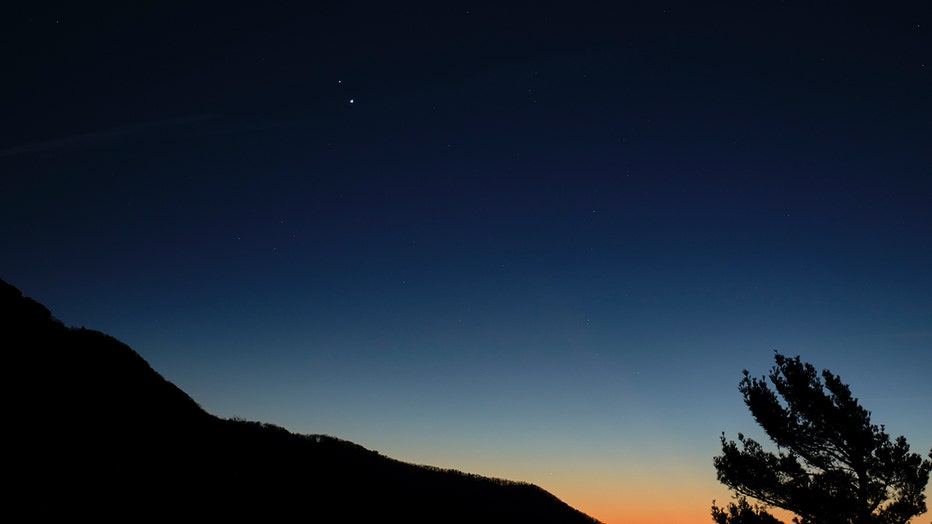 According to NASA, the celestial event will culminate on the evening of Dec. 21 and is considered a rare spectacle.

How rare is the celestial event?

While the planetary conjunction only happens every 20 years, it’s even rarer for the two planets to pass as closely as they will on Dec. 21.

"Jupiter and Saturn are going to be just a 10th of a degree apart in the sky, which is so close that if you extend your pinky out at arm's length, you’ll be able to cover both planets very easily with your pinky," Throop said. "The last time they were this close was 400 years ago in 1623." 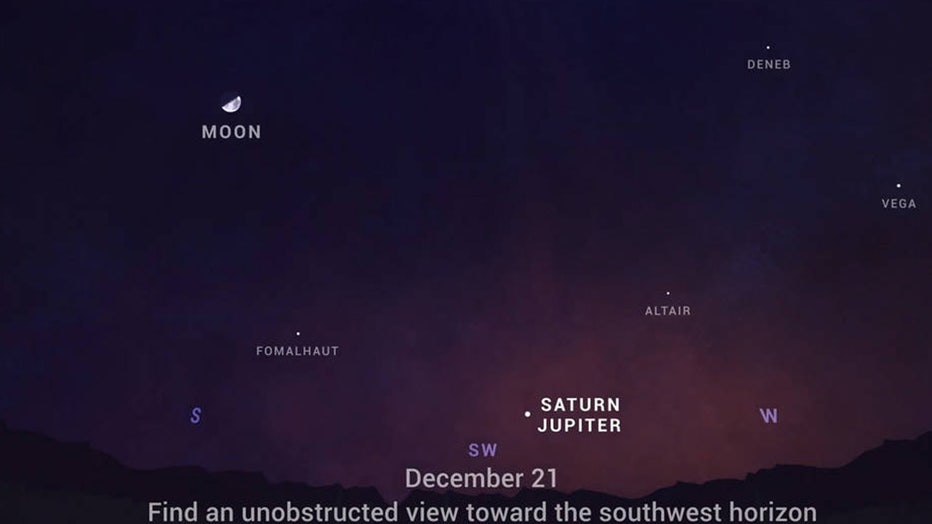 NASA said it has been nearly 800 years since the alignment of Saturn and Jupiter occurred at night, as it will for 2020, allowing nearly everyone around the world to witness the "great conjunction."

You can see the "Christmas star" on the evening of Dec. 21 on the same day as the winter solstice, which is when one of the Earth's poles has its maximum tilt away from the sun.

The planets will be easy to see with the unaided eye by looking toward the southwest if you’re in the Northern Hemisphere, just after sunset.

NASA suggests finding a spot with an unobstructed view of the sky.

"These planets are bright in the sky, they’re easy to see, even from the largest light-polluted cities in the world, people can go out and see them," Throop said. "You don’t need a telescope, you don’t need special equipment, and if you miss it on the 21st, that’s okay. You can go out on the 22nd."

Throop said you can continue watching days after the event and still be able to see Jupiter and Saturn in the sky as they separate.

"From our vantage point on Earth, the huge gas giants will appear very close together, but they will remain hundreds of millions of miles apart in space. And while the conjunction is happening on the same day as the winter solstice, the timing is merely a coincidence, based on the orbits of the planets and the tilt of the Earth," NASA wrote.

If you have binoculars or a small telescope, you may be able to see Jupiter’s four large moons orbiting the giant planet.

"Humans have this deep connection to the sky. For thousands of years people have been interested in watching the sky and connecting all the events that we see in our sky to different parts of culture, different parts of history, religion, across the world, and this is a great time to go out and see our place in the solar system and be inspired by the sky around us," Throop said.